Emerging from the Marlburian fog

Monday Night's Game was back to Flanders and the Duke. We were at minimal levels for the game, it being just me and Phil. Phil took the Anglo-Dutch. 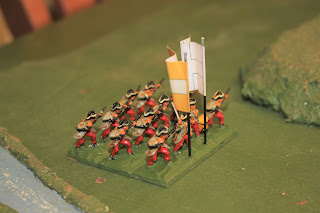 I'd finished a few more units so these made their debut. Here are some new Frenchies, which are virtually indistinguishable from all my old Frenchies, except for the flag. I'd also done quite  bit of tidying up of the rules, and thought we were in a good place with these. 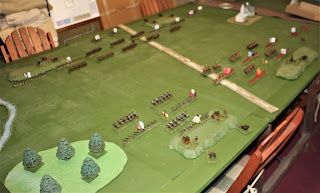 Slightly fuzzy picture, here, but you can see the set up. Anglo-Dutch are on the right, French, top left. The French are deliberately stacked with a strong cavalry centre. The Anglo-Dutch have a more mixed set up, with horse and foot intermixed. 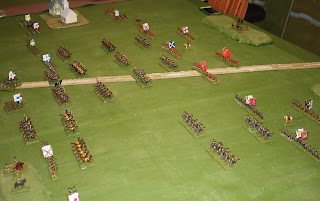 Phil advanced all of his cavalry quickly, as in previous games the Anglo-Dutch cavalry has been devastating. For this game I have tweaked the factors a bit, to make them strong in the first round, evening out in subsequent combats. I've also done more to favour units that are in Good Order and fresh. 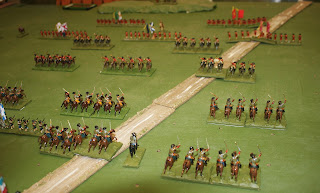 This is what we want. Lots of cavalry, lining each other up. 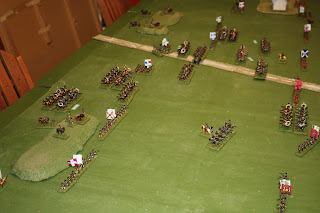 I'm missing a picture or two here, as mostly it looks like my cavalry are running away after one round of fighting. In fact it was quite tense at first, as I was able to inflict hits with my pistols and carbines ahead of the melee in quite a few instances. Alas after the second round of combat my luck ran out, mostly, and the English Heavies were marauding into my rear areas. 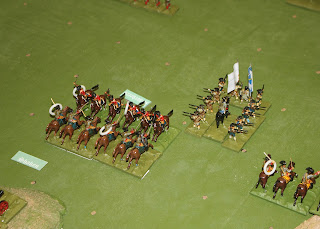 The left wasn't going too well, either,as I was forced into square as my flank seemed to be up in the air a bit. One of my Generals got himself isolated as well. 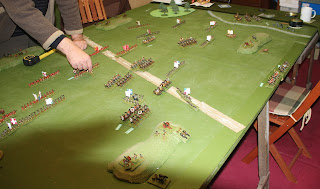 It's not all bad. Up in the top centre to the right of the regiment with the pink standard, my Guard cavalry have busted through their opponents. Okay, so they've ended up stranded in front of an infantry unit in line and will likely get shot up, but it's progress. However I really do need to get some favourable resolutions in the centre before Phil's pursuing cavalry return so that I've got some units to cover them. Most of my reserves, - actually, all of my reserves, - are firefighting like mad. 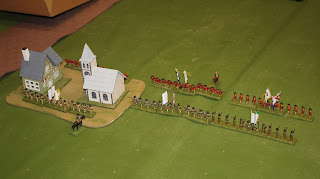 The battle for the village commences. Phil has put in his elite unit of Grenadiers. Outside the village the new "First Fire" rules are about to be tested. 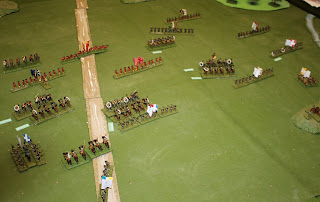 I'm not making a lot of progress. My Guard Cavalry has been quite badly shot up, which is a nuisance. 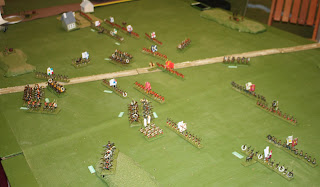 It's looking grim. I have failed to see off any of Phil's attacking units, and two of his cavalry units are back. 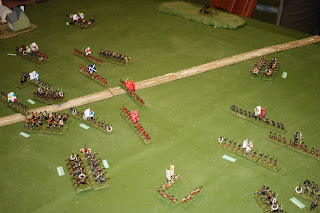 My centre is a bit open now. I think the end may be nigh. However, do note that in the top of the picture one of my infantry units is giving Orkney's Scots a good seeing to. 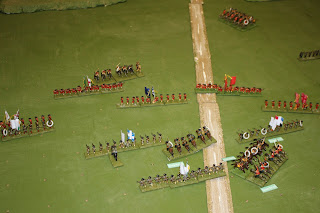 In the centre Phil has been able to withdraw some of his horse behind supporting infantry to reform. There are specific rules for this, so it is good to see them used. 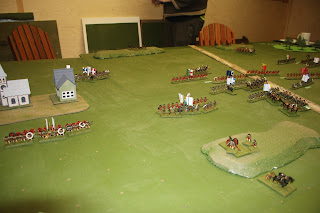 Well, my infantry in the town have been well and truly spanked by the Grenadiers, as have my other infantry on that flank, leaving the defeat of the Scots my only bright spot. In the centre Phil's foot is hemming me in, forcing me back onto his cavalry in my rear. 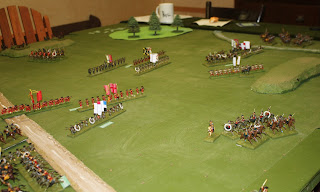 And to make it worse, just lost another cavalry melee on the right of the picture. My Guards, over top left, are currently being roughly handled by a fairly fresh English Dragoon unit. 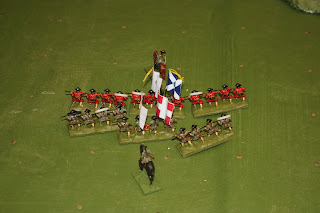 Look, look! This is me routing that infantry unit. This heroism will not go unreported. 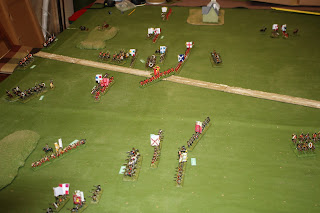 Yeah. That's about it. Don't be deceived. That cavalry unit supporting the Burgundians is actually a Dutch cavalry unit, waiting to cut them up when they get forced back by the infantry in front of them.

All in all it was a fairly ignominious defeat. I also lost a couple of guns. The causes of my defeat were many; the French generally fight on weaker factors than the Anglo-Dutch; my army was not set up with appropriate support lines (which is sort of what happened in the centre at Blenheim); Phil made a much better use of his Commanders to rally off disorder.

On the plus side the major changes to the rules functioned as required. More changes were identified (who'd have thought this game had the first tied melees in it?), but the core factors for Firing and Fighting are pretty much sorted, so I am happy with them. The morale system is solid, too. It's just how some of the moving parts fit together that need some work doing.

Right. Back to the painting desk now to do some work on some much needed cavalry.
Posted by Trebian at 17:35