Early May Bank Holiday Monday. It's nice and sunny, a beautiful warm evening. What better way to spend it than shut up in a shed with no air-conditioning.

A few things different for this game, other than the traditional rules re-write. Firstly I had a new guinea pig, as Chris A was available and had missed all previous playtests, secondly I wanted to spice the terrain  up a bit and put out a bit of rolling countryside. I also went back to a bit less of a stage-managed set up, - meaning I had most units enter the table in march column.

Up until now I have mostly been putting the cavalry friendly terrain in the centre of the table. This time I had an elevated plateau (bottom left of picture) suitable for horse, and then  a river valley in the centre of the table, and another plateau with a village on it. The plateaus are made of a combination of polystyrene shaped contours and foam rubber, covered by my faithful green curtain. 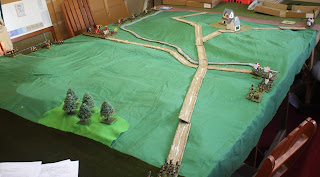 The French are to the right. Their cavalry is entering from the centre bottom, and they have two infantry brigades, one centre right, the other top right. The Anglo-Dutch have their British cavalry cresting the rise to the left, the British infantry entering centre left, and a mixed Dutch brigade heading for the village. 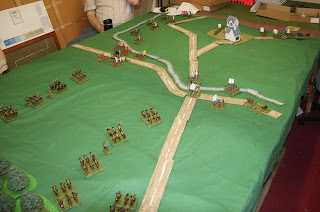 The cavalry soon scented their opposite numbers and started to line up for some action. Although the French (with me commanding them) are overall outnumbered in horse, they have a local superiority here. The British, however, show no fear. Elsewhere I have seized the bridge, and raised my standard in the village. 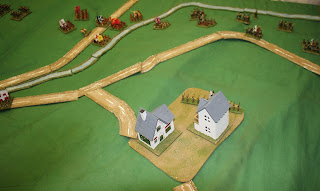 Chris was a bit nervous about what to do about the village, - his force had no artillery - and he moved forwards stealthily, remaining in column. 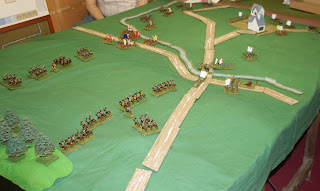 I got my horse into battle formation first, but was unable to catch the British before they deployed. 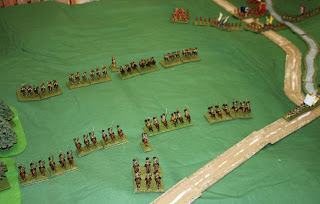 From this position, however, I was able to close up and give him a good round of pistol fire. Mostly to no effect. 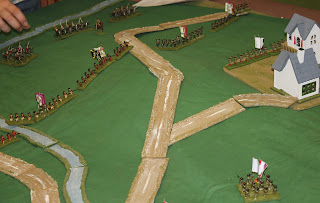 Meanwhile, over by the village Chris has deployed his infantry, and is closing in. 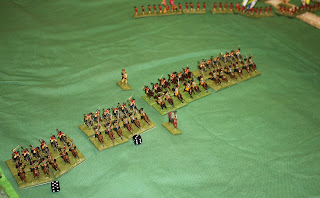 In the cavalry action I mixed it up a bit. The two units with dice behind them are standing their ground to deliver another pistol volley, whilst the other two are counter charging. 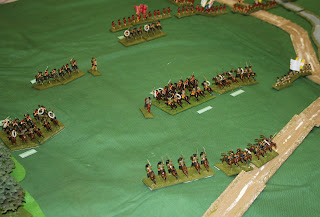 Fortunes are mixed. My left hand unit delivers a miracle, inflicting several hits from shooting, and then holding its own in the melee. Next to them, not so good. The pistols fail to hit their targets, and the unit breaks whilst trying to perform a break off move. The British do not pursue, due to my reserve line. Moving along again my fellows do remarkably well, and hold their ground too. On their right their compatriots win the melee and the British perform a successful retirement, which I decide not to pursue. 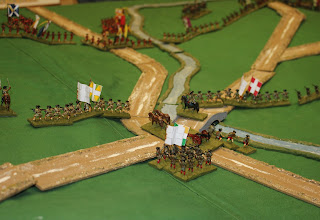 It's been a long hard road but the French artillery is finally being hauled into position to defend the river crossing. 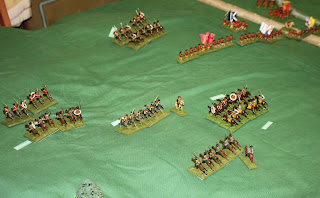 It's all looking rather good on the left, relatively speaking. Okay, so I've lost a unit (off picture, being pursued) but I've broken two British units, on the left and on the right. First time for the French in any of these games, I think. And, well, that inner right melee isn't going my way, but I've got a fresh unit lined up to take on those British cavalry centre left. 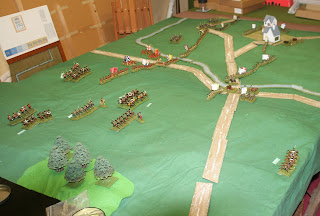 A wider view shows the overall position. The Anglo Dutch have finally got their battle line sorted, and I've got the French set up to defend the objectives. 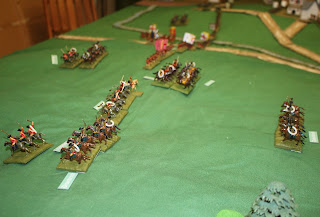 The cavalry melee develops further. The sharper eyed of you will note that the British cavalry that was routed have now lost a base each. The rules move both of the units in the routers' Cavalry Action Phase, and take off a base in the pursuer's. On the inner right I won the melee and pushed the British back. The other fight was a draw, and both units had to drop back. This was a disappointment as it was my best chance to defeat the British, as my unit was completely fresh and the British had fought already. 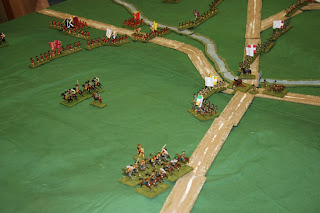 Next turn was a mixed bag. I lost the re-engaged combat that was drawn last turn, but beat back the other cavalry. Alas they now had infantry supports to rally behind. 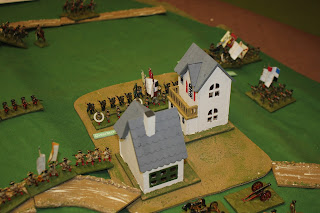 The Dutch finally get it together and storm into the town. Might need to increase the factors for defending buildings. 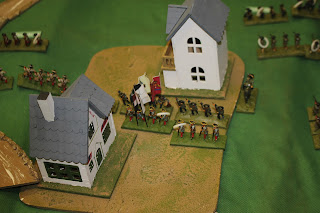 Yes. One volley and a steady advance to contact and my guys are running for the base line. Hmmm. 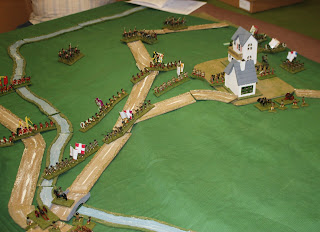 The interesting point in this picture is the Dutch cavalry, still in column, being rapidly moved to the Anglo Dutch right flank where my cavalry are gaining the upper hand. 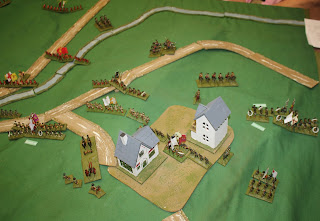 The action round the village is hotting up. Luckily on the right I have a unit in reserve. Unluckily I make a complete mess of deploying it. 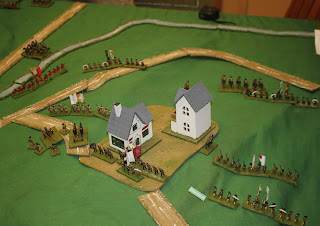 You see, one turn too late, allowing Phil to break the infantry in front with a cavalry charge, and then retire before I could swap them out for a fresh unit. 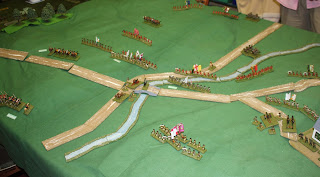 And it's getting late, so we finish there. Another Anglo-Dutch win, but I take comfort from the much better French performance in the face of greater odds. Got some good ideas for the command rules, too, which are rudimentary at best at the moment.