And so May rolls around and it is time for Campaign in the shopping centre at Milton Keynes.

I love this show. I have written before as to why I think it is such an important show for the hobby. To put it simply, - it is free to get in and it is run in a shopping mall. Members of the public who know nothing about wargaming can, and do, just chance upon it and learn about our wonderful hobby. There isn't another show like it, and it really deserves our support.

Our local group (well, mostly me and Phil) wear many hats at this show, - Northamptonshire Battlefields Society, Naseby Project, Battlefields Trust and the Society of Ancients. 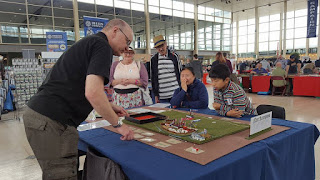 This is me, running the Battle of Northampton game on the Sunday. The young lad playing the game and his mother were just there for a bit of shopping in John Lewis'. The young lad got really into this, and badgered his Mum to buy a copy. Who knows, - perhaps he'll go on to become a "proper wargamer". The older couple in the background  live around Northampton, and knew nothing about the battle. You can see from this picture exactly why I think this show is important. (If you look closely you can see they also got medals for bombing the dam.....of which more later). 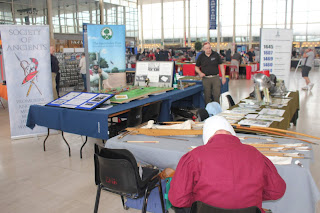 On the Sunday we were joined by some other NBS committee members, notably Peter, who is a medieval re-enactor, and a fletcher. We had quite a big stand this year, as you can see, so it is good to have a few more bodies to caver the floor space. 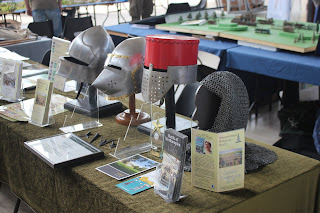 Our display of armour and equipment always garners attention, and we had a good selection of young people having their photos taken in one or other of the helmets. Someone even insisted on trying on the mail coif. 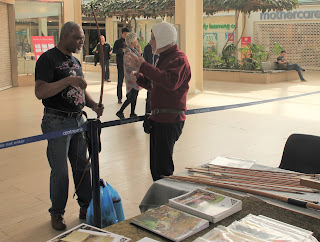 This gentleman summed up some of the reasons why we go to these things. He had hundreds of questions about bows, longbows, arrows, armour and anything to do with medieval warfare. He spent at least an hour talking to Peter, and then another 20 minutes talking to me. Hopefully he has gone away much better informed and will spread his enthusiasm to others. 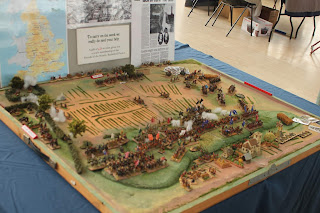 For the Battlefields Trust & the Naseby Project we had Phil's Naseby model in 15mm. The model uses an array of older figures, but they still look good. The flags are by "Fluttering Flags" 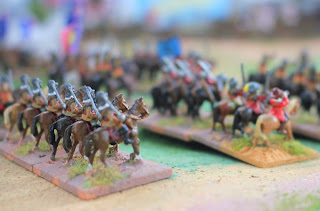 Here are some eye-candy shots of the figures, starting with Cromwell's Ironsides. 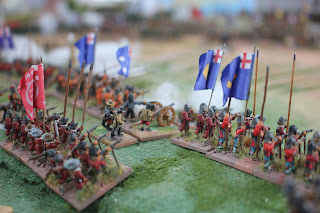 This picture, and the next one, are taken of the Parliamentarian Battle line. 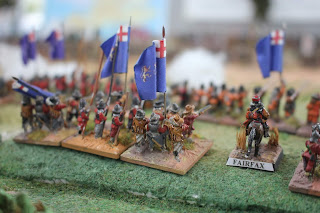 The model always provokes interest, and provides a talking point. Always a pleasure to work with it at a show.

For the Society of Ancients display Phil brought along his flat collection. Or should that be "collection of flats"? 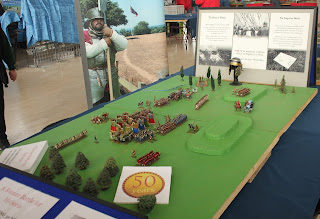 The flats are from the collections of Tony Bath, Phil Barker and Deryck Guyler. They are the ones used in the ancient game in Don Featherstone's book "Wargames". Phil has gone for a retro look, with the table being simple boards with emulsion paint, and block hills. 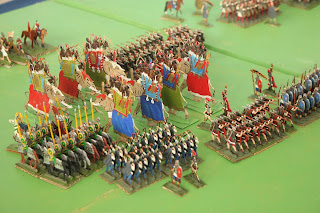 As these were Tony Bath's there's lots of elephants. Phil Barker's figures were mounted on multi figure bases made of corrugated cardboard. Tony B's were originally individual figures, pushed into ad hoc sabots. Phil S has rebased them onto corrugated card. 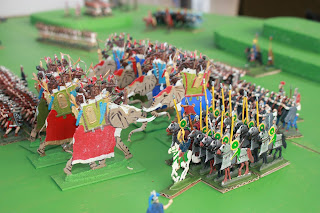 I'm not a fan of flats, but these are a piece of history and do look great. From side on. 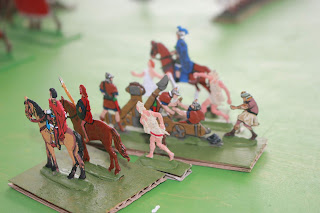 There's even a catapult and some general figures.

The number of traders isn't anything like Partizan or Salute, but you can get a good range of wargaming/gaming products. 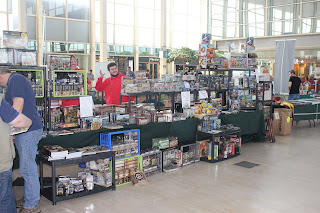 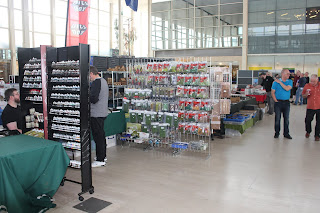 For a show with allegedly few trade stands I spent a lot of money. Mostly with Dave Lanchester.

There was an interesting array of demo/participation games. Some were eye catching, some were interesting and some were just lots of figures with people playing commercial rules. The latter aren't my favourites. 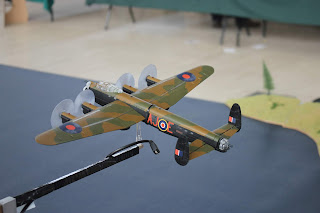 The Peterborough boys' Dambusters game is a peach. 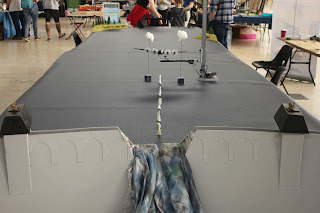 Apparently it was difficult to sight the towers at times because the light was so bright. No problems on this bombing run. 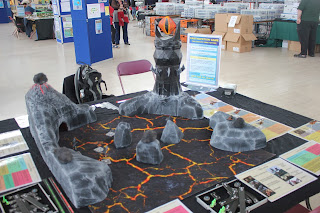 This game postulated the idea that the Fellowship of the Ring flew to Mordor on eagles and encountered Ringwraiths in aerial battles as they tried to destroy the Ring. 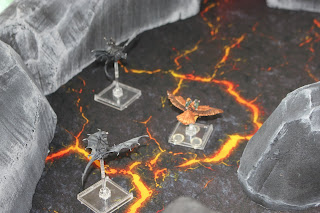 Interestingly Tolkien rejected the first film treatment sent to him  partly because the Fellowship use eagles to fly everywhere. Draw your own conclusions from that. 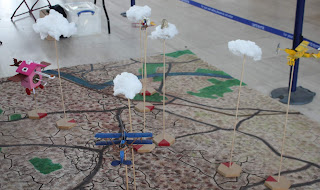 The Dastardly and Muttley "Stop the Pigeon" game was there. 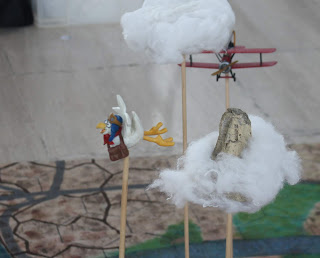 It seemed to be busy most of the weekend. I have no idea if the subject is a complete mystery to young people, or if the cartoons are on repeat on some digital channel. 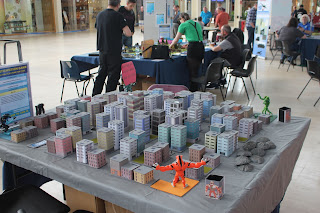 Kids seemed to be having a good time at the Monsters-Smash-Up-A-City game. Good to get people involved. 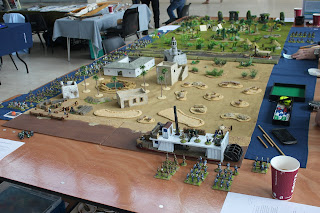 Near to us were a couple of tables using "CONGO" and some nice figures. I'm not sure what this was about, as it looked to  to just be a lot of club members having a good time. Didn't see a lot of the public involved, which if it is true is a shame.

So a good weekend all round, although it is hard on the feet. Off to Partizan next weekend. Maybe see you there?
Posted by Trebian at 19:59