So I read Nosworthy, and it set me to thinking. He doesn't exactly disagree with Chandler, but then he doesn't exactly agree with him either. It did clarify my thinking a bit about the tactical philosophies used by the opposing armies and how it might be embedded in the rules even more than now. 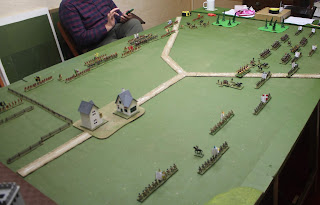 So as I was sitting waiting for my Monday Night opponent to arrive I started to  make a few adjustments, focusing on whether troops were trained to rely on musketry or cold steel. I was only part way done when Phil arrived, but by the end of our evening's session my ideas were well enough formed for the rewrite I put together afterwards.

I threw together some bits and pieces for a simple encounter battle. French to the right, British to the left. 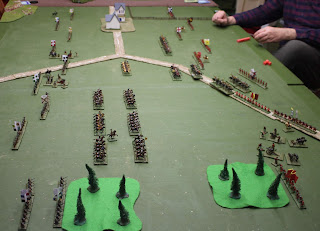 I'd set the armies up a bit off set. No one was in column, so we advanced towards each other in line. 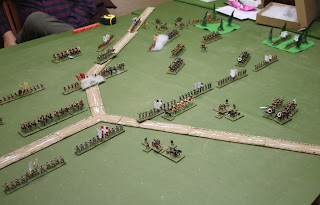 My cavalry in the centre got the worst of a volley from Phil's foot, and retired behind my infantry line. One other of my cavalry units came unstuck and were soon being pursued off the table. 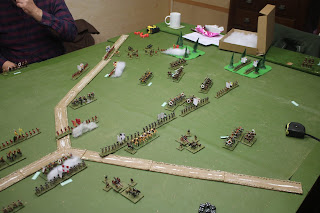 Bottom left Phil tries a frontal attack on my infantry, only to be held at bay by a combination of musketry and hard fighting. 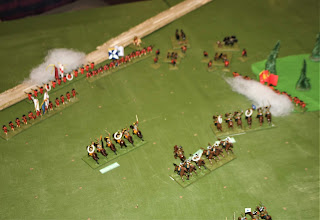 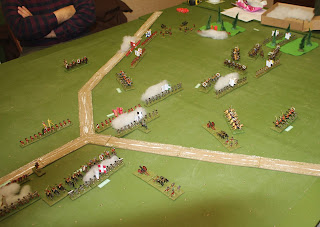 Bottom left Phil throws in some more cavalry to try and deal with my recalcitrant foot. Elsewhere volleys are exchanged. 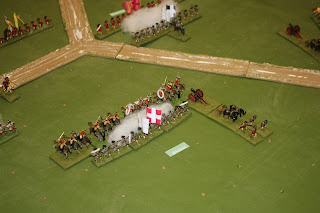 The extra horse do the trick and my line stumbles backwards.

Elsewhere we have a stalemate favouring the British, so we called it a night. We'd been speaking of other things, and so only got in 4 or 5 moves. None the less I got a lot out of the game from the point of view of game mechanics, so an evening well spent.
Posted by Trebian at 20:16