Well, we finally got round to this game. The Society of Ancients Battle Day for 2018 was Parataikene, the monumental draw between Antigonus and Eumenes. I was intending to do the game with Basic Impetus, and I also got a load of figures painted so I could swap out the interlopers from previous games. No Assyrians or Gauls lurking in the background for this one.

Then, of course, Mrs T and I booked our epic holiday to New Zealand, which happened to clash with the Games Day. That meant that rather than run it on the actual day I would need to put aside some Shedquarters time to do it.

The obvious choice was 19th May, well away from TV shows and street parties commemorating the Royal Wedding. My protagonists were Chris A and Phil. Alas Will was unwell, so we thought there would only be three of us. Luckily MNG irregular Graham S phoned Chris part way through and unveiled his availability (well, he was looking for someone to play a board game with actually), so he joined us - of which more anon. 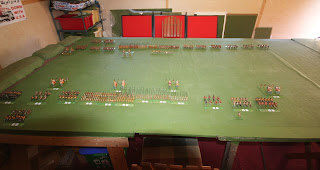 Eumenes is this side, Antigonus opposite. Phil and I ran Eumenes, and Chris took Antigonus along with Graham S when he arrived. 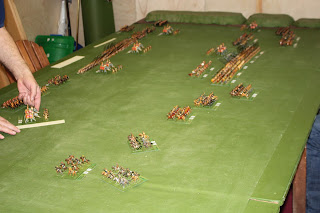 Taking the advice of the Battle Day organiser I made a big open space on the Eumenid right wing. This meant that the Antigonid light horse could pull out wide and occupy the Eumenid heavies. As you can see from the picture players never like the historical set up, and Phil is moving his right wing elephants across sharpish. 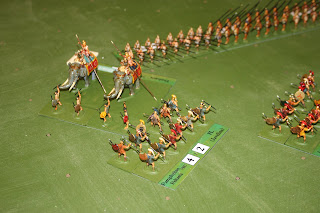 Chris' peltasts take on one of Phil's elephants. Note that the elephant is a modified BI unit, - I've added light infantry bases and changed the factors. I also put in a rule about horse not being able to charge them. This gave a better result compared to the base rules, but still isn't perfect. However unlike some of the early play throughs elephants weren't the battle winning weapon, which is more authentic. 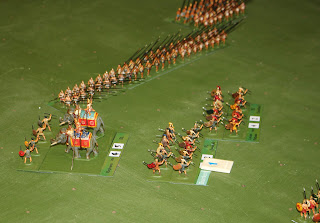 In fact, the peltasts did for the elephants pretty quickly. 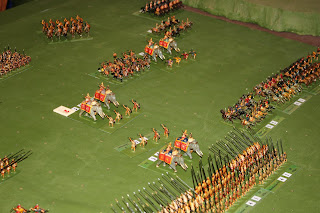 Out on the other wing it was a bit more crowded and cagey. 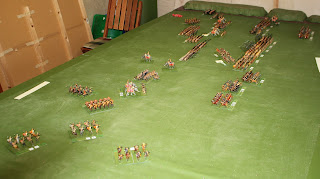 In the centre the Antigonid peltasts were lining up to have a go at the Eumenid phalanx. 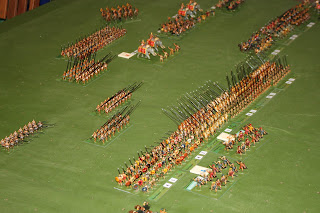 This didn't go well for them, and they soon retired behind their own phalanx. BTW I up-gunned the Silver Shield/Hypaspist factors for this game, as those in the base rules don't allow them to perform as well as they did historically. 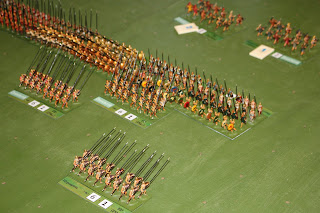 The peltasts had broken up the neatness of the Eumenid line, but they got stuck in anyway. 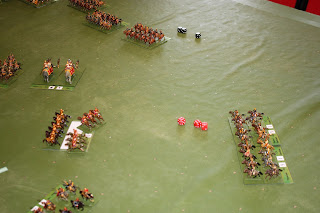 Graham S turned up, and his first action was to roll three sixes which caused my Companions to break and flee. BI has a form of catastrophe mechanism which, on reflection, turns the game into a bit of a crap shoot. 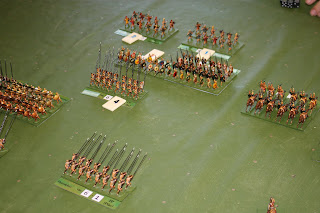 The Silver Shields are starting to have an effect. That should be a two unit deep block on their left, and they've driven the whole lot back, including their neighbours, killing a unit in the process. 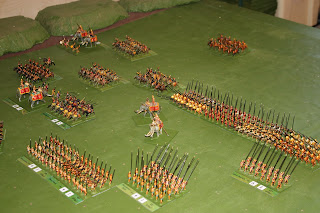 Elsewhere in the middle another elephant unit comes unstuck... 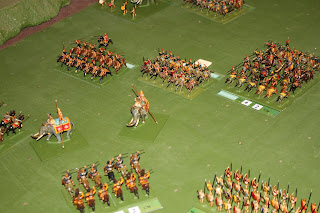 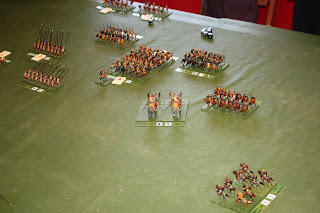 Over on the right I'm doing my best to compensate for the shock loss of my Companions by covering my cavalry's flank with a elephant, to scare off those pesky light horse. 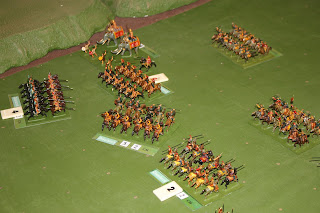 The left has turned into a maelstrom of whirling cavalry actions. 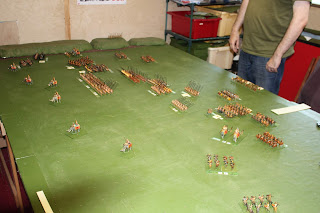 The elephants are a busted flush, but the veterans in Eumenes line are performing as expected. 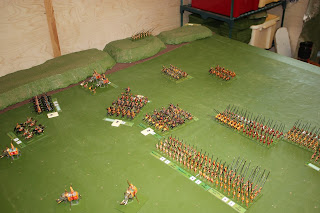 The left wing is opening up, but some outrageous dice rolling is throwing up some odd outcomes and what our DBA friends might call "quick kills". 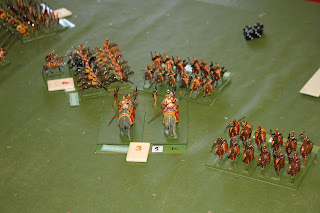 On the other flank a dual attack on a cavalry unit with elephants and flanking cavalry fails to break them. Repeatedly. What is going on here?? (Phil was kind enough to say that my decision here may have cost us the battle.) 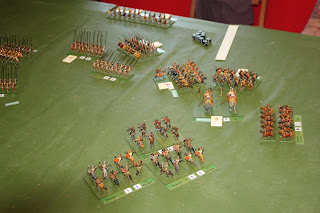 Look. They still won't die, and that light horse is coming round our rear. 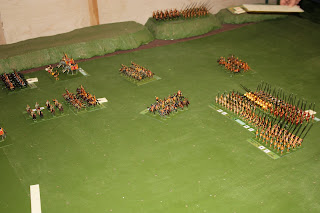 The Antigonids have finally unlocked their right flank, and are bursting out to attack our infatry. 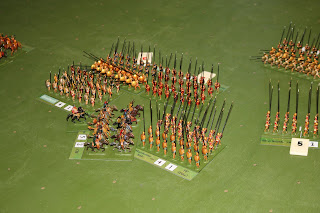 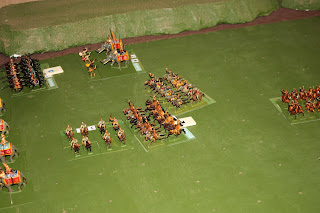 And then the left wing fell away.

The Antigonids posted a win but the Silver Shields/Hypaspists survived to fight another day.

I'm aiming for a proper write up for Slingshot, with full army lists, rule amendments and critique. In summary we had a good game but whether it was Successor Warfare or not is a moot point. That may not matter to many (after all I've just downloaded Pike & Shotte for free from Warlord games and reading through confirms what I thought, - that's got nothing to do with renaissance warfare, but people love them any way), but I think it means that this experiment has now been closed down as far as the Monday Night Group is concerned.
Posted by Trebian at 12:03