Countdown to COW for Corporal John

Yes, only 3 more game evenings before "Va t'en guerre" is unleashed upon the wargaming public at this year's COW, so some playtesting opportunities still to be taken. 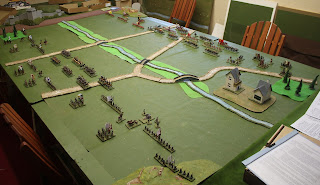 Following on from the last game, when I'd started to change things round a bit to accommodate more of Nosworthy's views, I'd had a more coherent re-write covering Platoon Fire and the French "a prest" tactics. I've also added extra benefits for fighting in line and allowing a place for the cavalry to re-group. For this game the French are to the left, with the Anglo-Dutch to the right. 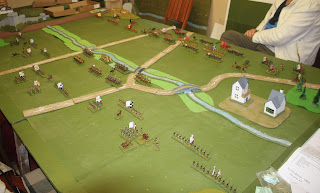 I start by winning the initiative, and press forward to cross the stream and boggy ground. Phil, who is running the Anglo-Dutch has been playing "Shako" over the weekend, so he had some helpful comments to make. 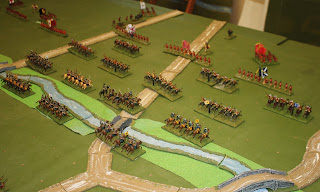 Because it's a Marlborough game you have to have a big cavalry melee in the centre, don't you? I don't have enough space toys or time to do a proper battle refight at COW, so I'm aiming to do a sort of extract of the centre at Blenheim. Here we are, surging towards each other. 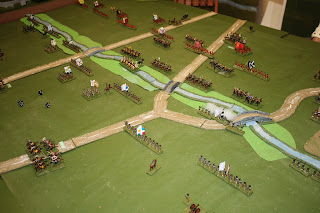 Mixed results all along the line, but happy with how the rule changes are shaping up. I've had two units routed, but I broke one of Phil's and have fought him to a standstill elsewhere. 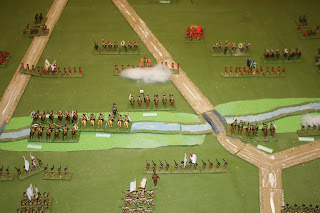 Alas I have run into Phil's infantry support, and one of my cavalry units receives a full volley, disrupting it badly. I have a slight concern that musketry is too effective but I want the game to move along and not get bogged down. Plus this'll teach me not stand in front of fully formed infantry with loaded muskets. 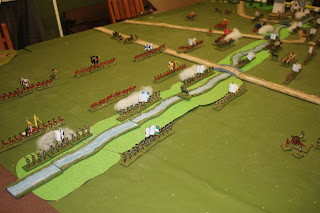 On the left flank I emerged from the marsh and delivered my volleys. Alas I failed to inflict damage all along the line, so some of my units fell into disorder. 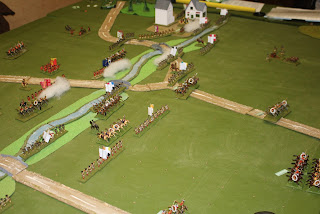 I've rather been driven back in the centre. Hmmm. 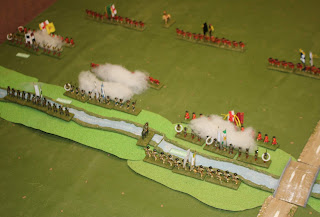 On the left we start to close. Shouting "Vive le roi" my men storm across the marshy ground, ignoring the rippling stream of lead from the Anglo Dutch Platoon Fire. It's a mixed outcome, with some being driven back by defensive fire, whilst on the left victory is nearly ours. 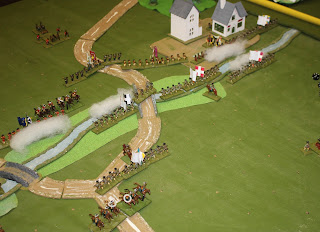 Over on the right we're finally getting into action, with musket fire being exchanged. 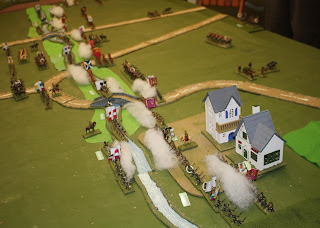 The battlefield is now wreathed in smoke. I'm just about holding my own, but Phil is gaining the upper hand. 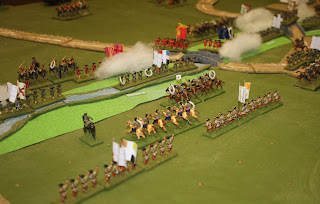 In the centre I've been able to push my infantry forward to allow my cavalry to reform in relative safety. 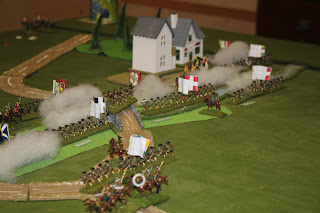 We ended when the battle for the village was just hotting up and I had reformed my horse sufficiently to guard against Phil's returning marauding cavalry.

Phil remarked at the end that what I'm good at is getting period detail into a game, but what I'm less good at is laying out how you win a battle, - what sort of thing makes a brigade/division/army break and flee. I think that's fair comment. I usually put in a paragraph about army break levels and then just ignore it on the grounds that it should be obvious who has won. This can lead to a bit of "last man standing" gaming at its worst.

Still, something to think about, but otherwise progress is good, - and it looks like 18th century linear warfare, so that's positive.
Posted by Trebian at 10:08