Barely a week after we packed up a Milton Keynes we were unpacking again this time at Newark, for the first Partizan on the year. We were positioned in the "History Zone". I'm not a fan of this idea as it puts all the similar organisations in a ghetto together. It is better for us to be amongst the traders/participation games as we offer all of that as well as the historical stuff. Plus the area was blighted by a no-show from the Pike & Shot Society. You can see the big empty table on the right of the picture. 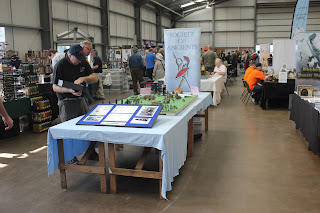 Here's Phil putting out his flats which again attracted a lot of interest. 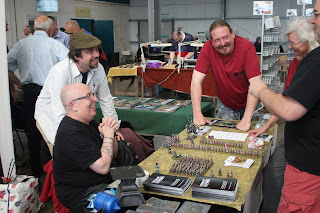 The Waterloo Uncovered project was just round the corner from us. They are promoting the Waterloo Replayed event which is happening in Glasgow next June. It is aiming to put on the biggest 28mm figure game. They are using "Black Powder". It's not the way I would have done it, but best of luck to them. The chap in the cap is Prof Tony Pollard, who was one of the Two Men in a Trench.

There was a good range of participation/demonstration games. Well, there were a lot of games amongst which there were some that looked a bit different. 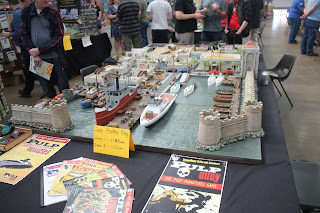 There is a tendency for people putting on big scenery games, like the above. 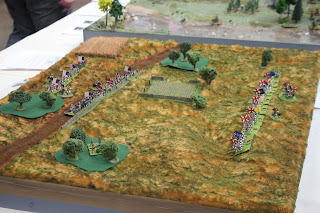 This lot were putting on two linked games, I think, but I didn't have time to follow up with questions. 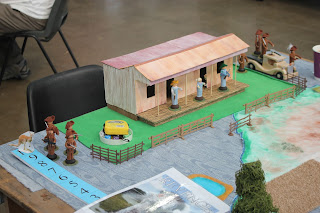 This was an ostrich hunting game using Playmobil figures. Well, it's different and eye catching. 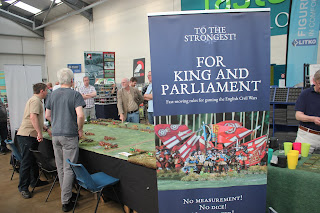 Simon Miller was there with his ECW modification of his square based "To The Strongest" system. 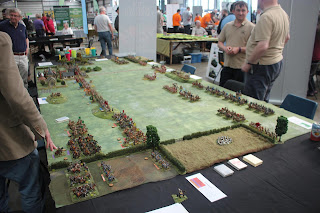 This has a lot of things going on in it that appeal to me. Squares & playing cards being two of them. I picked up the rule book but couldn't get the sense of them from a quick flick through. They suffer like most modern rules from the matey style of writing that needs you to commit to reading the whole lot to get an idea of what is happening. At £20 they're in the normal price range, so I might be tempted in the future. Be nice to have a game first. 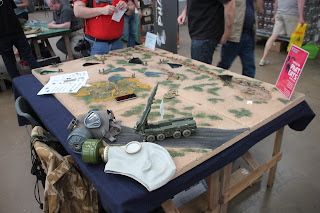 I liked the look of the SCUD hunting game..... 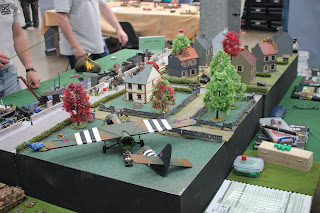 .... and kudos to anyone who puts a glider on the table too. 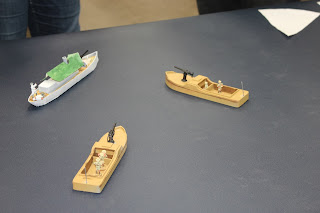 The Peterborough boys who do the Dambusters Game were there with Mimi and Toutou. On another very long table. 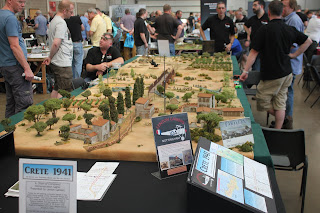 Interesting subject and another long table with lots of stuff and some bi-planes. 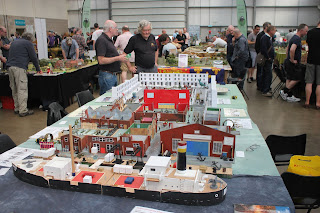 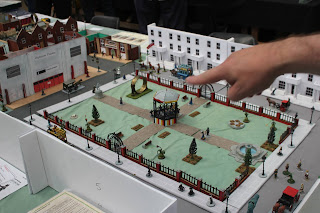 Here some top pointing draws my attention to detail that is significant if you're from Great Yarmouth. 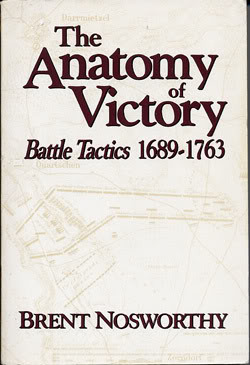 We had a decent day, and chatted to a good few people. I got in a few purchases and even picked up a bargain from Dave Ryan (yes, I know, not very likely but true).

Brent Nosworthy's book is a bit of the Holy Grail for WSS wargamers. Alas it is usually only available from the USA and the postage pushes the sale price up to £50-£60.

Dave had one at £30 and seems to have not picked up the on-line price has to have postage added. Anyway it was soon in my swag bag, along with some other odds and ends.