A (board) game in Spain

A few weeks back my chum Tony H sent me this link on Facebook: link. Yes. It's a game about the battle of the Ebro during the Spanish Civil War, published in Poland.

The company "Tatyka i strategia" publish quite a few games, and have a core WW2 era set of rules they then use as a base for a rabge of games.

The query was whether there were rules in English (answer yes), and then whether the price was a good 'un. I mean, I'm not poverty stricken but there's only so much I'll pay for a board game.

I checked out the company's website, and they were quoting 69 PLN (that's zloty to you and me) plus postage. That's under £15 + postage. I was interested at that point.

However....the FB page was quoting €41 + postage, (£37+ postage) which was certainly more than I wanted to pay. I sent a PM via face book to Wojciech Zalewski, the bloke who owns "TiS" and asked him what was going on. He pointed out that this was the price he had to charge because of PayPal's predatory fx pricing (my words not his). I worked out where the problem was from our end, and negotiated a price in GBP, which came in at c£25 as I got two copies, one for me and one for Tony.

I don't really buy hex grid games these days unless there's a special reason (eg "Manchu"), but as I am now regularly playing this type of game with new friend Gary, and I'm interested in the Spanish Civil War, I thought it was time to add to my collection.

The game arrived within a week of publication day, so that was good. Production is good, box is sturdy, pieces and map are nice. All the counters got shaken out of the frame en-route, which is shade irritating as I then needed to do a counter count to check I'd got all the bits.You get rules in Polish, Spanish and English. The English translation is okay, but it wouldn't have hurt to have an English proof reader give them the once over. Luckily if you PM "TiS" via FB they will respond fairly quickly. You get three scenarios in the English game. There's a fourth in the Polish rules, which will be receiving the attentions of Mr Google Translate at some point. 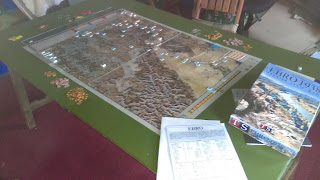 There are some interesting rule mechanisms that mean it isn't just an SPI clone. The Out of Supply rules have a surrender mechanism, and the way units can dig in is quite interesting too. I set the game up the day before we were due to play, and decided I'd better take the Republicans. It all looked fairly horrible. They key decision in turn one is where to put out your bridges to build a platform to encircle/capture Gandesa, which is the Republican "automatic victory" condition. Like the historic battle you start the game with a lot of chunky units, but that isn't the issue. The CRT is fairly bloodless, and the ability of units to dig in (and everyone starts in Field Fortifications) means that even at maximum odds you might only get a retreat result, and the "speed bump" just gets bumped up the road a bit. 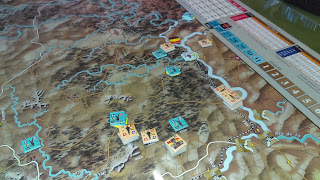 This is an issue as the terrain is hilly/rocky/woody and moving off the roads is very very, slow. So even a really weak unit can cost you a turn's approach march. Second turn in and I've managed to get across the Ebro successfully, and in the north capture Fayon (under the Republic's flag), which is one of the secondary victory point items for Republicans. You'll see XV corps is trying to force the road at the bottom of the picture, to get at Gandesa on the extreme left. 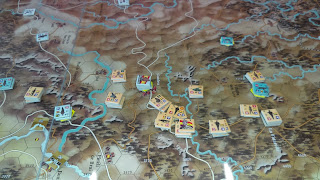 A few more turns in, and I've manged to push my way up the centre, and Gary has withdrawn as many units as he can back into Gandesa. Gary's reinforcements are starting to rush down the board from the top, so the clock is ticking. 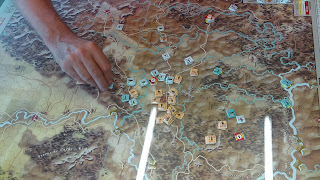 Nearing the end of the game, and Gandesa is nearly surrounded. The hex is empty as Gary has taken the stack of Nationalists out to make it easier to count them. My challenge is to close the pocket at the top, which I need to do to win. Otherwise Gary is going to get a VP win by holding back reinforcement points (he gets 1VP for every 8 Strength Points he doesn't use). 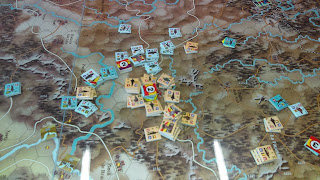 Last but one turn, and I've done it. I manage to bounce a unit from an attack into the last gap taking step losses in the process, but so what? I've encircled and captured the city.

Interesting game, where both of us were convinced we were going to lose. If I hadn't sealed the pocket off Gary would have had a comfortable VP win, as I couldn't occupy any of the other cities, having gambled on taking Gandesa. All in all it took about 4 1/2 hours to play, not including set up.

Good game. We'll play again. Pieces are nice and clear, map is easy to follow. Rules could do with improvement, but we can live with that for now.

Very pleased with my purchase. Thanks for bringing to my attention, Mr H.
Posted by Trebian at 17:49