It comes round so quickly, sometimes. COW is here again, the highlight of my wargaming year. A whole weekend of games and talking about wargaming with old friends, and some new ones too.

Usually there is a pre-COW visit of some type. This year we did the Battle of Northampton. We did it a few years ago when knowledge was not what it is now, so it was time to revisit the location, especially so as both Phil and I have now walked it many times. 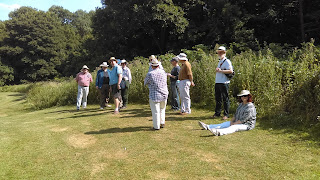 It was a beautiful day. The only real issue we had was that traffic issues caused a lot of people to arrive in dribs and drabs so we were about an hour behind on our overall schedule, but not to worry. The picture is of the group surveying the battlefield from the Eleanor Cross viewpoint on the corner of the battlefield.

All of this meant I got to Knuston a little later than usual, but not so late that I couldn't enjoy a pint of beer by the croquet lawn with some old friends before dinner.

We had no plenary game this year, but went straight into After Dinner Games. My first game was "Halberdiers". This was probably not what you think. It was brought along by Jim Roche, a close friend of the late, legendary Paddy Griffith. It is what Paddy called "a dice game", based upon Evelyn Waugh's "Sword of Honour" trilogy, a tale of well educated young men and their careers during WW2  . I remember it from an earlier COW, with the equally legendary John Davis wandering around with a big crate marked "Apthorpe's Thunderbox". I hadn't realised that playthrough was in  1984.

It is in many ways typical of a Paddy "entertainment". It is put together to capture the essence of its subject, - which it will do - but without regard for the total player experience. What happens is there are a series of turns, during which die rolls and playing cards determine what happens to each individual. Players make notes on a biographical log, whilst acquiring medals and rising through the ranks. Because both the game and the book are a satire the "best war" is had by those who don't do any actual fighting but hang around on the staff, and end up with masses of chest ornaments and gold on their collars. MNG'r Chris A luckily followed that path and ended the war with a row of medals about 12" long and such an elevated status in terms of his rank it's a wonder he didn't get a nosebleed. I, on the other hand, got sent to Norway in 1940, spent half a dozen or more dreary turns in a POW camp, before escaping. On return to England I was drafted into the commandos, sent to Egypt and was captured during the raid on Rommel. After several more turns as a POW I died trying to escape. Returning as a younger scion of the family I was sent to the Far East where I ended up having a nervous breakdown.

It could have been more fun. It has a similar issue to what's become known as the "man in a cupboard" problem that afflicted a number of Paddy's games, where a role involved a player being on their own in a room, and if dice rolls or the game went a certain way they would possibly see one umpire or another player once in a day's play. Paddy would defend this as being realistic. I'd then point out I'd driven half the length of the country to take part.

After that another sort of nostalgia. Tom Mouat was putting on a "Traveller" game. Although I often do Tom's RPGs I was inclined to pass this year as I couldn't see the value in revisiting a commercial RPG from the 1970s/80s. A brief chat with Tom revealed he was actually just using the universe and the technological background, but had simplified/re-written the rules and it would simply be a "Footfall" game in space. 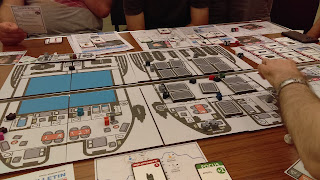 So it would have been rude not to join in. Tom does nice playing aids, - like the equipment cards and the playing boards. The scenario was just a tale of every day space faring folk being attacked by space pirates whilst on a ship carrying illegal cloning experiments.

Uncannily in this game it wasn't necessary to shoot a colleague or chuck them out of an airlock.

This ran til after midnight, so a lot in common with RPGs I played in the 70s/80s, and we had a successful outcome.

I still had time enough to set up my game for the following day: 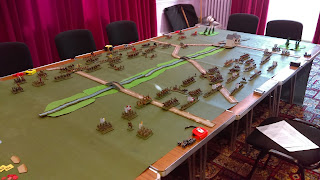 It was then off to fall into bed about 1am to get in a few hours shuteye before Saturday's excitement.
Posted by Trebian at 13:34