Up bright and early to put the finishing touches to my game for the morning and to make sure I'm at the head of the queue for breakfast. This is the culmination of moves of game development, so I need to be fortified for what is ahead. 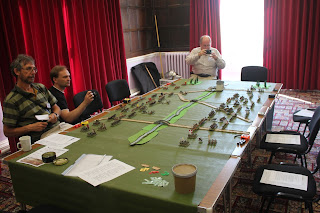 Some players turned up early to get their eye candy shots before everyone else musses the table up. As you can see I didn't put enough river sections in the scenery box, but I have been able to leave a small margin at either side to keep dice and measures off the green cloth. 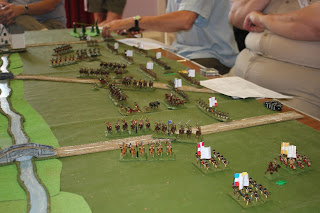 The French started by ignoring how I'd set the toys up and sent their cavalry off to the flanks. Phil S was on hand to dispense tactical advice and suggested that I might have put them in the iddle for a reason. 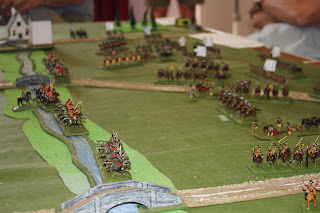 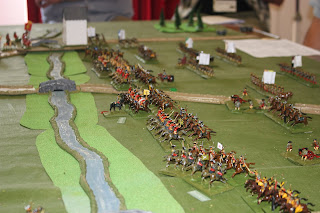 ....and got separated from their infantry supports, which proved to be less than clever. 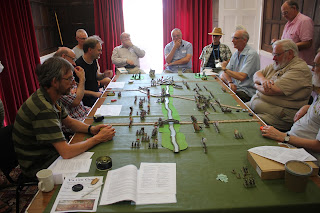 I had a good turn out. Not only did the sign up sheet fill up quickly (sorry Tony) but I also had an audience who sat through the game for the entire two hour session. 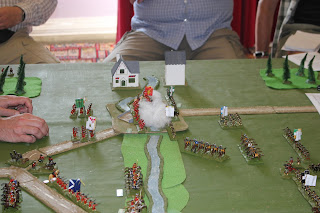 The infantry started to grapple with each other in the village. Smoke was deployed. 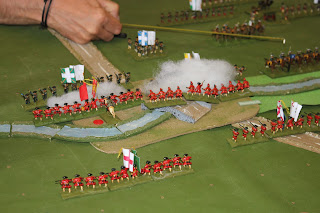 The centre started to hot up too. 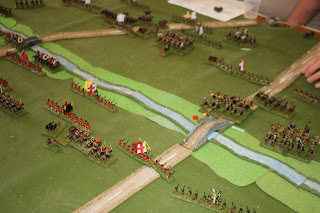 After the initial cavalry clash, everyone has fallen back to reform whilst the infantry advances to cover them. 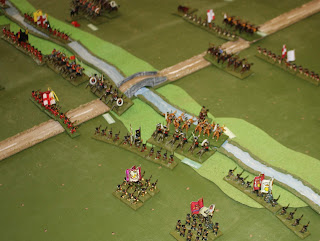 Then we were back for more mounted mayhem. 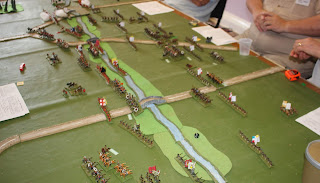 The game was in full swing when I had to call a halt to it all. Unusually I only had a half morning  2 hour slot, and I usually do a double session, allowing 3-4 hours for explanations and play. I should probably have queried the timetable, but it did mean I could play something else.

Overall the feedback was very good, and it was good to see that the system held up with a complete batch of players who had not played the system before, - although Phil's help there was invaluable to guide them in the correct direction. The game did not slow down with more players, which is unusual. Ian Drury, who is a wargamer and game designer who I respect a lot, was kind enough to say it was a cracking set of rules.

And everyone loves the Airfix.