Phil had been talking about taking his flats to COW and playing Tony Bath's rules from Don Featherstone's "Wargames".

So that's what he did. There was a slot on Saturday morning right after my game, so it fitted in there. I agreed to help out, and had put together a QRS from the rules in the book before hand. It was an interesting experience. 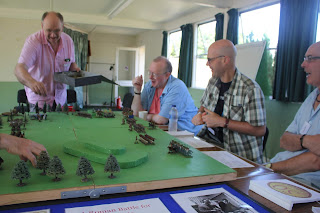 I have to say watching Phil put the toys out in front of the players was like watching kids at a birthday party as the jelly is being served and they are trying to be on their best behaviour. 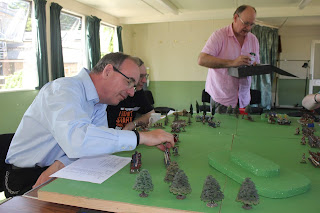 Eventually someone has to touch the figures of course. 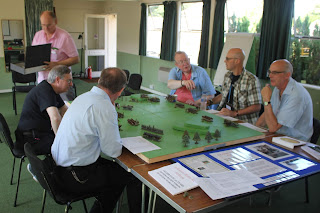 The scenario was Romans in Hyboria. That enables us to use Romans, and elephants and chariots. 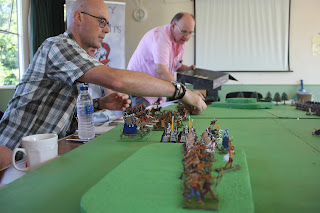 They do look nice from the side. 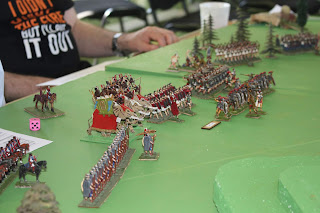 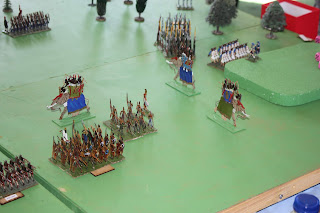 Tony Bath loved elephants, and generally the rules are elephant friendly. However here we see them stampeding after a shooting hit. I'm not sure we were playing the rules right. 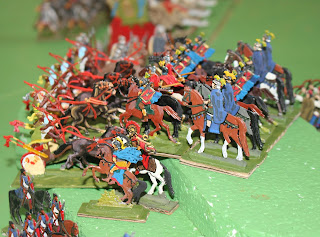 We had a chariot v cavalry melee half way up a hill. I think I got this right, but who can tell? 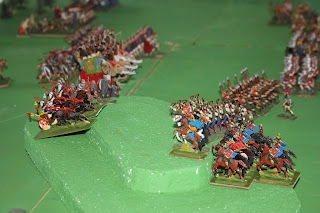 Both sides failed morale tests and withdrew. The morale rules are, frankly, a bit bizarre and truly random in the correct use of the word. 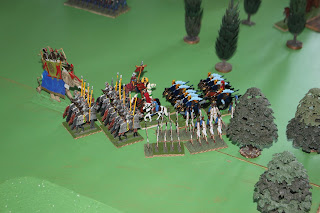 A real higgledy-piggledy melee with all sorts of units involved. I am almost certain we didn't get the flank attack stuff right. 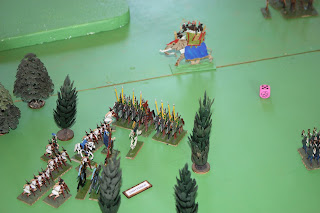 More melee fun and games as an elephant looks for a unit to stampede into.

We didn't finish the game, - we played about 4 moves in 1 1/2 hours (the game in "Wargames" lasts for 5 turns, before one commander gives up). Even with my QRS and a copy of the rules to hand it wasn't as easy as you might hope. My excuse is that I'd come straight from running "Va t'en guerre" and I find it hard to have two sets of rules in my head at the same time that I have to umpire from. We probably needed more than one copy of the rule book, but alas John Curry of the "History of Wargaming Project" didn't bring any copies with him this year.

The rules are fairly straight forward, but there are odd bits and pieces left lying around as I think it is accepted that they were under constant change and re-writes didn't always remove the odd bits not needed when Tony Bath shifted from individual figure v figure combat to his points based system. The account of the battle in the book is helpful, but in places does actually contradict the rules.

What we never really got going was the discussion I think Phil wanted about what Tony B actually meant and whether or not Don F understood what he had put in his book. We needed much more time to play this in reflective mood and, as I indicated, everyone really needed a set of the rules.

Having said all of that this was a really interesting attempt at some practical wargaming archaeology. It was remarked by someone else that they had looked again at Brigadier Young's "Charge" rules and wondered how a game was ever played with them, taken home straight from the library and without anyone to explain them.We are in a different world and we are used to a more systematic approach to the writing of rules. I think it is also true that Tony Bath didn't know much about how ancient warfare was actually fought, - but then perhaps no one did back then, and we all now live in an environment when so much is known and understood (elephants are much better at fighting light infantry in these rules than heavy infantry, for example, which today would be regarded as laughable).

And I think everyone who played wouldn't have missed this chance to put their hands on some history for the world.