After lunch it was time to play in a game, rather than run one.

Tom Mouat was there with his professional Matrix Game Construction Kit, which was produced at the request of DSTL to enable matrix games to be played by a variety of Government departments. The box contains a few scenarios, some maps and a whole host of coloured chips and stickers and counters and lots of other stuff to enable you to design and play matrix games. It'll cost you just shy of $300 apparently, as it is a print on demand type thing. And it has a lot of bits in it.

We played "Reckoning of Vultures" which is a game based upon the machinations around the impending death of an absolute dictator in a third world country. It comes with the kit, although Tom didn't write it. I have run several games like this in my fictional country of Zambola, so I was interested to see how the professionals might deal with it.

Everyone plays a different faction, - armed, secret service, police, oligarchs, workers - and manoeuvres to get influence in key locations and stitch up everyone else. We had one complete novice in the room who did really well. 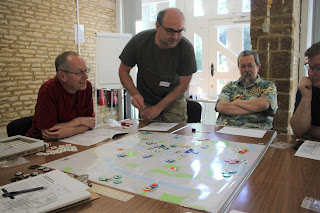 I've not run any matrix games for a while, and the professional style has veered away from what was the accepted recreational approach. Professionals want to be able to argue why an argument might fail, rather than just allow an umpire to judge. This is useful as it enables the subject matter being evaluated to be thoroughly examined. This works well - but at the cost of slowing the game down and disrupting the narrative badly in place. Of course, this could be sour grapes. I'm good at the former style of game, and struggled to adapt to the changes. 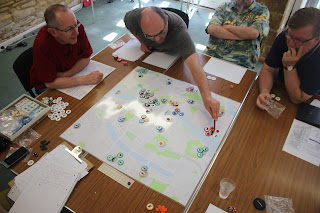 The scenario has some issues in how things are resolved, - the final turn influence+2d6 die roll to determine the winner is out of kilter given the number of factions and the influence points available. However, I don't know why I'm moaning, - I came a comfortable second and nearly won it.

I also had some some issues with misunderstanding what I was being told. Saying a counter is "equal strength" isn't the same as saying it is equally effective, and I suppose I should have expected my groups of thugs to have come unstuck when confronted by special forces. And you will always have the issue that a poor set of dice rolls can get you stuck in a hole it is hard to get out of.

Even with all these caveats the matrix game is still a really powerful tool and the wargaming experience is unique and at its best, incomparable. Tom peppered the session with discrete anecdotes from his professional experiences with matrix games, and it is clear they are having a real effect on determining options for policy makers. Absolutely invaluable session.

Although I won't be changing the way I run games.
Posted by Trebian at 09:54