After Dinner it was time for more games. I was quite excited to see an Indian Mutiny game on the list of sessions, even though it wasn't using my rules (which, admittedly, need a revision).

This was a siege relief game, using a variation on "Muskets & Tomahawks". I haven't played M&T but people whose views I respect have and like them a lot, so that's good. On the other hand there is a tendency in a lot (most?) wargamers to find a set of rules we like and then adapt them for everything regardless of suitability. The original "AK47 Republic" rules would be the prime example of this. 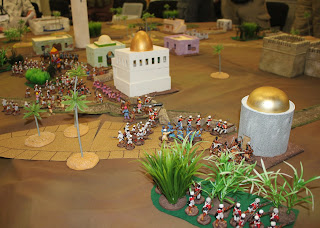 Peter Grizzell, who put the game on, has a lot of IM figures. Like, really a lot. And he tried to get all of them on the table, as far as I could see. Kudos to the man. I was surprised to see all the figures individually based with no movement trays in sight. 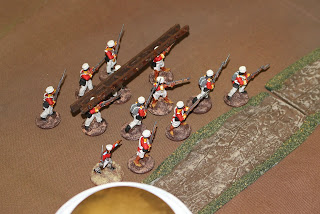 Of course the lack of movement trays does mean does mean you can set your figures up like this. I  was a mutineer leader, and these are my brave chaps rushing the wall with a scaling ladder. Ian Drury got quite excited about this as he says the original M&T author wanted rules that would give games that looked like a movie. 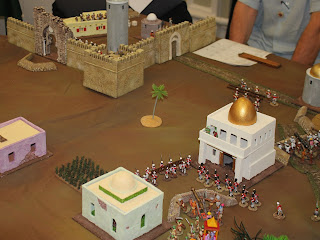 The system has a card based movement process, where troops of the same type get one or two actions. That means that it is hard to get a co-ordinated attack going, and you have to do things when you can, so in a storm situation you have some units exposed in the open whilst others stay in their trenches. 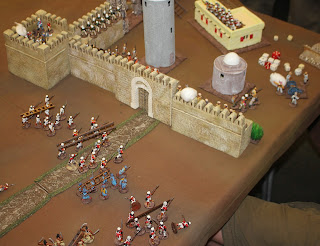 I did finally get all my chaps rushing forwards. It looked spectacular. I was asked why we attacked the closed gate rather than the big, open one the other side. Well, because the open ground we had to cover was much shorter, and the British had deployed all their best stuff to defend it. And we had ladders. 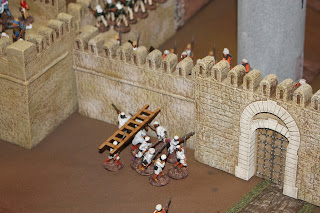 At last a party got to the walls. 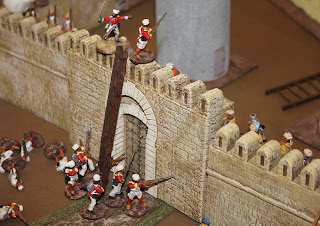 Due to a lack of activation cards thereafter the Brits got in a round or two of shooting, and that first team all got killed, pretty much. But then my brave mutineers had a double action move and ran up the ladder to engage the defenders. 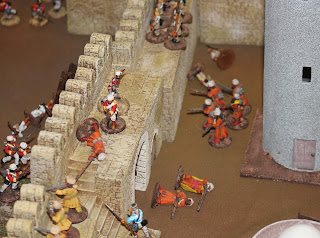 We swept them off the walls and then sort of stopped, because we had no more activation cards until the deck was reshuffled. So we did what all successful stormers of walls do, we stood in the open and strutted up and down whilst the defenders shot at us. 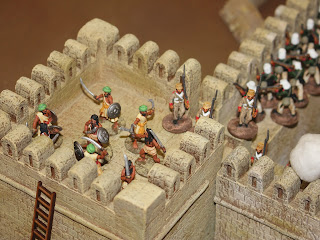 But then my colleague got in over the corner tower after it had been swept clear by artillery, and we were truly on top. 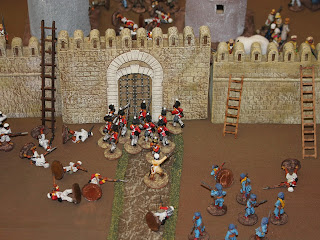 You can't see here, but my leader has now jumped down inside and opened the gates. My chaps are about to pour through. We also got another unit up and over the wall, so as the game ended we had three units inside, the requirement to take the city under our victory conditions (one defender meanwhile was bleating "But I've still got more figures left than them", - well, the victory conditions were clear. Take it on the chin. No one likes a whiny loser). We didn't prevent the relief breaking through our lines, so possibly a protracted and messy follow on game is required to truly award the bragging rights.

We were actively umpired in the game by three umpires, and it all ran fairly well once we'd had a couple of turns. I'm not seeing anything clever in the mechanisms - they have a common sort of thread with many modern skirmish type rules, with "To hit" scores and so on by unit type. What makes it work is the need for players to have personal victory conditions and a scenario that gets everyone involved. I don't know if the rules are particularly cinematic; I think that element comes from priming the players properly and having a scenario that encourages it.

After that another individual figure skirmish game. Well COW is about trying things you don't do normally. This was a much smaller scale, - Mike Elliott's "Buckle My Swash" - guess what period it covers?

Well, we have the Four Musketeers, some other Musketeers, the Cardinal and his Guard and some stuff with diamonds. 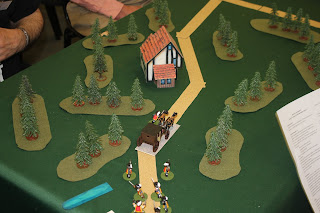 It's a small table, but there were enough roles for four of us. I got the Cardinal's Guard. 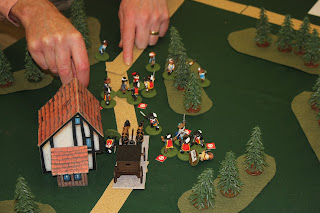 Soon we were all out flashing our blades, not entirely sure why. It all became clear in the debrief. The rules were simple - basically an opposed die roll with simple modifiers. They allowed the game to carry on at a brisk pace. I think we won. Mike had a "special actions" rule, which enabled you to say you were doing something not in the rules, then roll 2d6 for an outcome. I used it once. Planchett (Roy Kinnear in the movies) crept up behind me to brain me with a bottle. I said I'd duck and he'd hit my opponent instead. A double 6 later, and that's what happened. Highlight of my evening.

In the post game discussion Mike said he wanted to get some sort of cinematic element. I suggested a turn by turn VP system, where you get points for duelling, wounding an opponent, surviving wounds, doing spectacular stuff and so on.

I'm sure it'll be back. Next time maybe Tom Mouat will even get out of the coach.