Sunday morning can often have a bit of a morning-after-the-night-before feel to it. I didn't actually play any games, but attended one workshop, listened to a talk and then gave a talk myself.

I regret that I missed Andrew "Rumblestrip" Rolph's game on the Western Desert, but programming meant I had to be somewhere else for the first session and by the second it was so well underway I didn't feel me joining in would help.

The workshop was a discussion about multi-centre wargames. This was brought about following the game we played in Shedquarters in February where games were simultaneously being run in London, Sheffield and Stirling and Shedquarters. The debrief after that game prompted the organiser to have a get together at COW to discuss how we could improve things. This was a useful session, particularly aided by Jim Wallman of "Megagame Makers" being present. Jim has organised a game with simultaneous locations in London, Cambridge, Southampton, Montreal, New York and Austin, Texas, so he had quite a lot of insight, although he has access to greater resources and time , - the idea of running practice games in the six months prior to the actual game day isn't going to fly with this group, I fear. However, we did thrash out some issues we had encountered and the next effort will be even better. We all hope.

After that I grabbed a cup of tea and a biscuit and headed off to look at Wuestenkregkartenblockenspiel. This was Andrew's game, referred to above. Andrew ran Rattenkrieg last year, which I really enjoyed and this seemed stuffed full of good ideas too. Everyone playing it was very positive.

Then off to hear Bob Cordery of Wargames Miscellany talk about his forays into self publishing with some does and don'ts and pitfalls. A useful session, and very informative. Although I've done a bit of self publishing - for example with "Northampton 1460" - I haven't used any of the print on demand companies like "Lulu". Bob's advice there will probably prove to be helpful, - even though I don't agree on his preference for sans serif fonts.

After lunch it was me, talking about the Battle of Edgcote. Phil S and I did a joint presentation on our researches so far to the Northamptonshire Battlefields Society in May. That took us about 90 minutes + questions, so I just did the middle bit on analysing the sources and army sizes as the slot was just an hour.

I don't have any pictures of this, and I haven't found any posted anywhere else, so here's one of me doing the talk for the NBS: 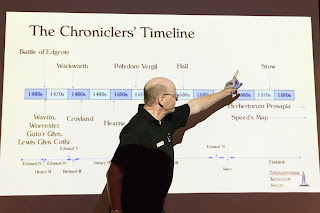 This slide was in the COW presentation, and sort of sums up part of my thesis, - that not all primary sources are contemporary, and some might not even be primary. I had about 20 in the room, which is nearly half the conference, and had some well informed people in the audience too, who, I think, bought the general thesis and were surprised at how easy it was to over turn some of their preconceptions. I also do something on the comparative sizes of armies at various battles to help us try to work out how many people were actually at Edgcote, and that went down well too.

I was very pleased with how it went. If you are interested and want to know more, keep your eyes open. Next year NBS will be organising a one day study day on the battle in Northampton and I will be re-doing this, with the added advantage of another 12 months' research and reflection.

And then it was time for the AGM and good byes until next year. What another terrific weekend.