Rebased at Tel-el-Kebir. Sort of.

Needed to get my rebased units out on the table so I needed a big game for British and Egyptian forces.

Thoughts turned to the 1882 campaign, and the Battle of Tel El Kebir, partly as it is the biggest battle of this type and also because my Great Grandfather was there, as a L/Cpl in the Duke of Cornwall's Light Infantry.

I went back to my card-driven "Redcoats in the Sudan", last seen four years ago in this post, for the game

Now TEK is a big battle, And with 200 yards per square the 6" squares couldn't hack it, even with a table the size of mine. So, back to my Chile play mat and hills, 3" squares it is, now my troops are based small enough to fit, as long as they're in two ranks. That gives me enough real estate to get a good crack at the set up. 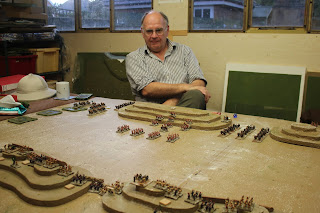 My source for the battle was Featherstone's Osprey book. We also had Pith Helmets.I had a Fez. Phil & Chris K showed up, and as the Egyptians are fairly static, I took them as a plumpire (Phil's idea), and he and CK split the Brits.

I had some scenario specific rules, - wheeled transport for the Brits doesn't move on a black card on their right flank, due to soft sand, and the Egyptians can only react if they have a red card until they are attacked, because it is a night/day break attack, and they might be asleep 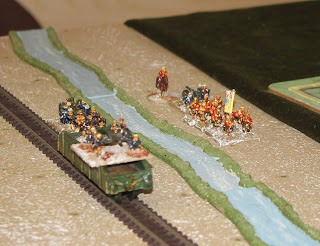 The Brits had a Krupp gun on a railway carriage, which they used to advance alongside the canal. The canal is fordable with difficulty as the Egyptians had dammed it further up. 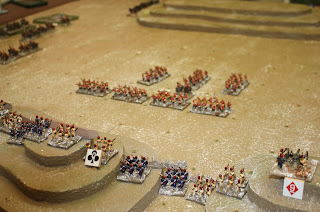 The British advanced confidently. On the left you can see the Cavalry surging forwards, whilst the artillery limber gets stuck in the sand. 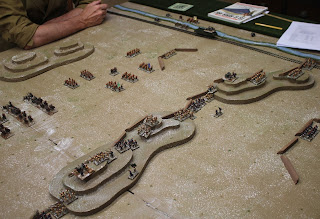 The artillery brigade in the middle had a tentative approach, as did CK's Highlanders. 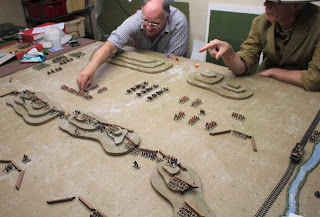 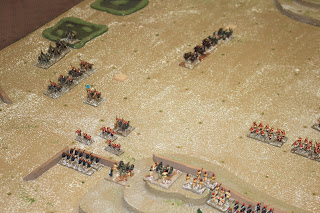 I think the Household Cavalry were a bit surprised at being asked to dismount and approach the defences in skirmish order. 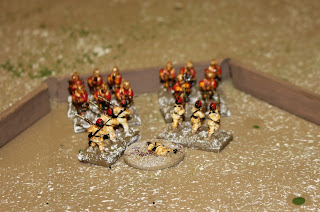 Meanwhile the first attack went in with the bayonet, as the Highland Light Infantry delivered a quick volley on the forward bastion, then rushed the position. 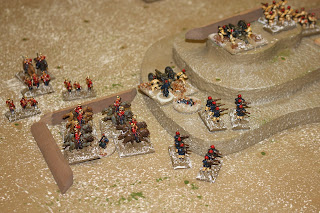 On the Egyptian left the cavalry flanked the position, and spooked the defenders, who routed without firing a shot. 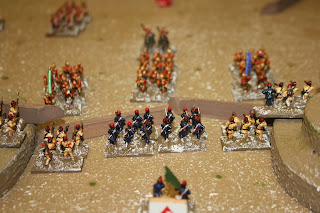 The rest of the Highland Brigade advanced resolutely on the defensive line, keeping to march column to maintain flexibility. 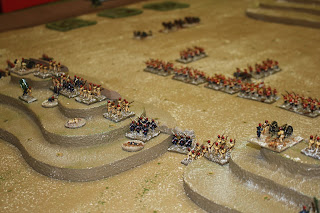 The English regiments shook out into line, before continuing their steady advance. 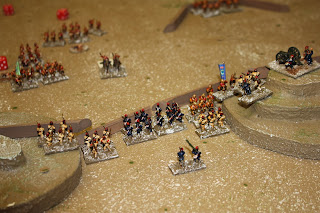 The Highlanders got a rude awakening when they tried to go over the barricades. Surprise was insufficient, and they were driven back (which is quite close to what happened on the actual battle). 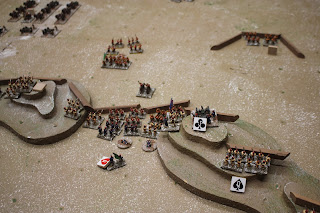 A second wave, now including the DCLI went in, this time gaining a foot hold. 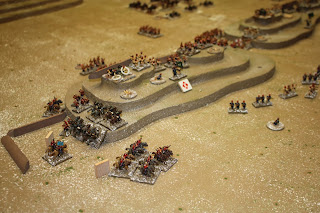 The Egyptian left has started to crumble. Pinned from the front by the infantry attack, the cavalry got amongst the fellahin. 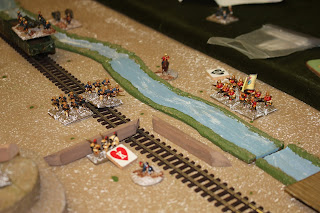 Almost forgotten on the right, the Naval Brigade, supported by the Krupp Railway Gun  and the Seaforths destroy most of the troops defending the barricade and canal dam. 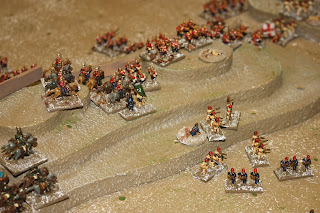 The cavalry are well amongst them now. 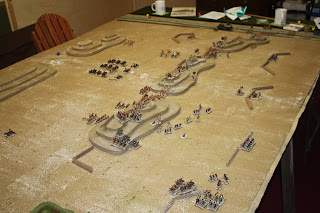 And we end with most of the Egyptian army fleeing.

Well, it provided an evening's entertainment, and was reasonably accurate. I was rusty with the rules, and it was clear they need a bit of work for this type of game.

It occurred to me at the time that perhaps I should be looking at a variant of "Taiping Era" or "It's Getting a Bit Chile". Hmmm. Some thoughts for the future.
Posted by Trebian at 20:56