So, yes, after several hours slogging at one another in the Low Countries we headed off to a nondescript piece of sea probably off Japan for some turn of the century naval action (that's 19th to 20th, not 20th to 21st).

We were using Dave Manley's Ironclad rules based on DBA which he wrote to enable you to fight the Russo-Japanese Naval War in a day. Or something similar. You used to be able to download them for free I think, but I couldn't find a workable link when I was writing this blog. The ships were hand built wooden models made by Chris A, similar in style to those that Bob Cordery has pioneered. 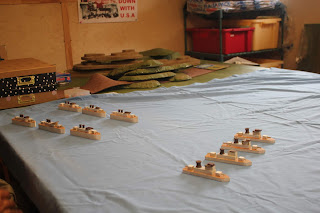 Phil and I had three flotillas, two each of three modern battleships, and one of armoured cruisers. 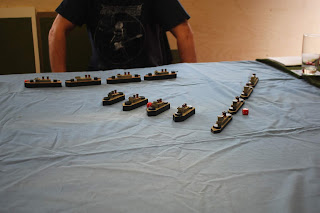 Richard and Gary also had three flotillas, all of four ships. One, the farthest from the camera, consisted of modern battleships, like ours. In the middle they had four obsolete battleships and then four armoured cruisers.

You roll pips for each flotilla then decide who is moving first. Pips make little difference until you get damage you need to repair. It is the worst example of trying to crowbar a Naval game into the DBA pips/attack factor/defence factor system in the rules. Upfront I have to say that although it gave a lively game the whole logic of it was at times odd and I think we can do better. 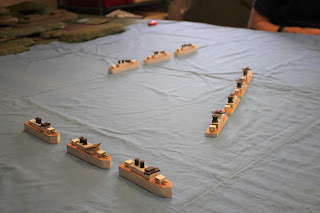 We started to manoeuvre out to the wings, whilst holding the centre with our cruisers. 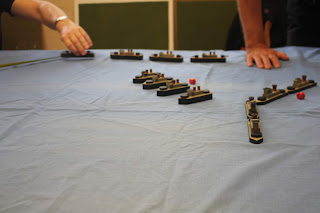 They reacted to us by mirroring our tactics. The only problem for us was that we had matched our armoured cruisers up against the obsolete battleships. Obsolete they may be, but they're still battleships. 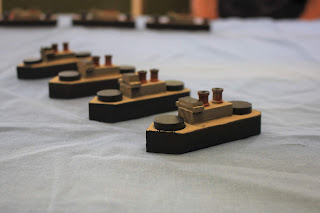 Here's a close up of the obsolete battleships. I think the paint might still have been wet. Almost. 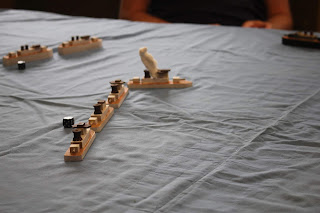 First blood to Richard and Gary, as one of our cruisers sustains a hit. The rules have the shoot & support model in DBA. It also requires you to alternate attacks between opposing flotillas, but you can draw support from other flotillas that haven't fired yet. It sort of works, but honestly, it's a bit of a muddle. 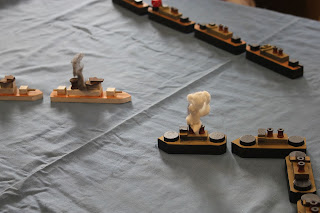 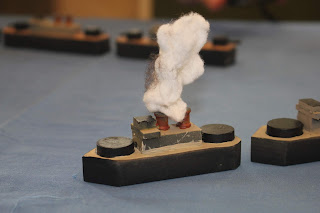 The aim is to have smoke on wire or paper clips to drop down the funnels. 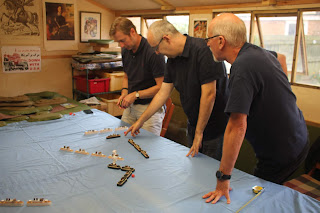 An admiral's conference with the umpire (centre). The turning and exact positioning of ships was open to question. Phil reckoned this would all be fixed by putting the ships on bases. 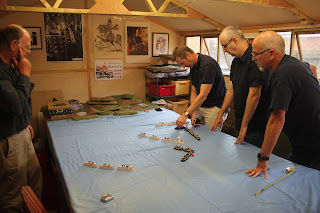 As the conference continues, Phil looks on unconvinced. 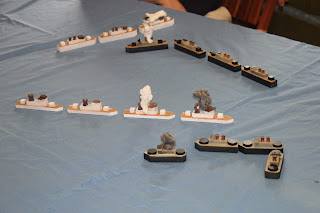 Our cruisers are starting to suffer. Richard is adopting an edge of the world strategy. This was thwarted by simply pulling the cloth across the table a bit, as we had a fair bit of overhang. 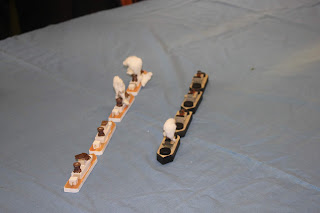 Our damage control teams have got our grey smoke under control. The two flotillas exchange broadsides. 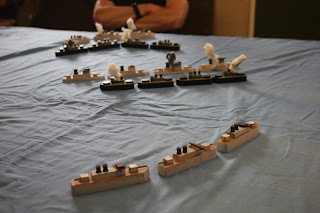 There's hard pounding out on the table edge. I'm trying to bring the enemies armoured cruisers to battle. They have proved elusive. 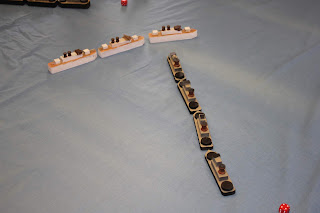 I finally cross the "T" of the cruisers. Alas my fire isn't that effective (hey, it's DBA, isn't it?), but I have got control of the sea space and am able to dictate where he can go. 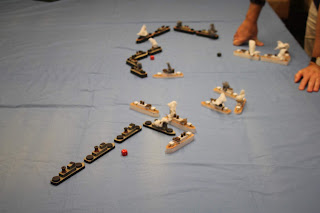 As you can see I am forcing the enemies armoured cruisers back on themselves, and am able to concentrate fire on specific ships. Be nice if I could hit something properly. 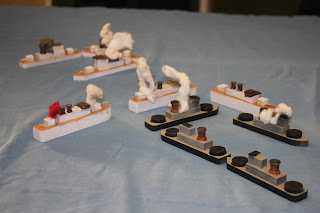 The fire system has a critical hit on a 6:1 result. So it isn't bad enough that you get hit when you really shouldn't, you also end up catching fire (red smoke). Or blowing up.

We broke at this point and went down the pub for some dinner and refreshment. When we got back it was sufficiently late that we packed up so those travelling distance could get home at a reasonable time.

Whatever, - everyone pronounced themselves happy with the day, and we have another booked, in theory, in under a month's time, due to the way calendars have worked out for all of us. We need to work at how we get more games in during the day, but that criticism is minor. What is better than a day's wargaming with a group of jolly good chaps, anyway? Hard to think of anything else I'd rather be doing.

Sometimes I don't realise how lucky I am.