Four years ago, to the day, we had a day of gaming in Shedquarters with a friend, Richard L,  from the West Country. We've met up in the intervening years, alternating with Shedquarters West, and it was my turn to host again in the original Shedquarters.

This time we were joined by Phil, Chris A and Gary. We started off with a big game of "Va t'en guerre" as Richard is a bit of a Marlburian buff, and has been commenting on the earlier drafts.

I had made a few changes post-COW. These were mainly to alter the ability of the French to rally back with their cavalry, and also to reduce the Anglo-Dutch power in cavalry melees. These turned out not to be entirely successful as ideas, and some of then will be unwound. It was also the first time the command rules got a thorough work out, and they proved to be too effective, so probably changes there.

The game was sort of Ramillies. The French are to the left. I've got every painted figure I own for the period out here, with only one artillery piece in the box. The sparsity of the second line indicates to me that I need to get on and paint some more figures. 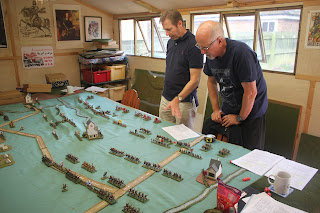 I teamed up Gary and Richard. Gary isn't really a figure gamer, but I can rely upon him to read the rules. He quite likes working collaboratively, as does Richard. 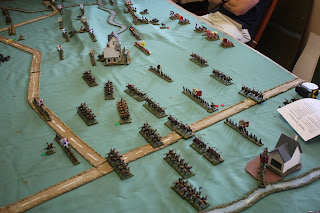 The game opened with the massed cavalry facing up to each other. We would have a big cavalry melee on this flank. 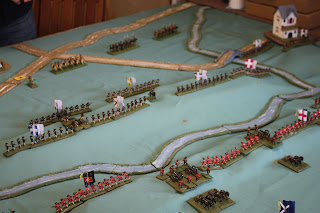 In order to pin the French in position, the Anglo-Dutch moved forward, preparatory to attempting to storm the opposing ridge line. There's a scratch unit of grenadiers to spearhead the attack. 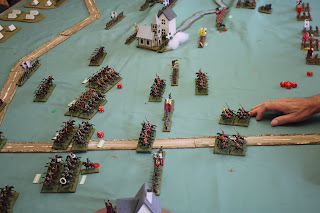 The cavalry fight starts. The Anglo-Dutch have brought their slightly more numerous infantry up in support. 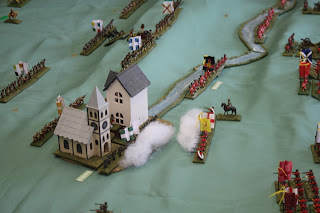 The attack on Ramillies begins. To keep the Anglo-Dutch infantry in place, Marlborough has joined them, to keep removing the Disorder status and otherwise ensure they continue to perform. This can be a risk... 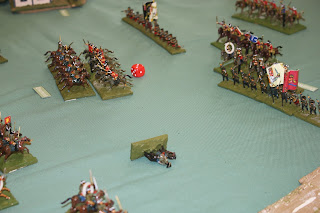 ...as the French find out. Down goes one of their Generals who was attached to a unit which has  routed (off picture to the left). The responsible unit of Dutch horse has rallied back and reformed behind their infantry as the line presses forwards. 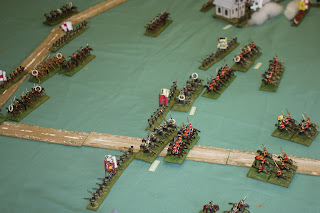 The allies are well formed up and are pressing the French hard. 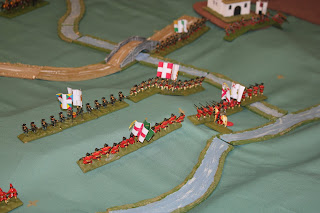 The Anglo Dutch cross the stream and start to scale the heights opposite. 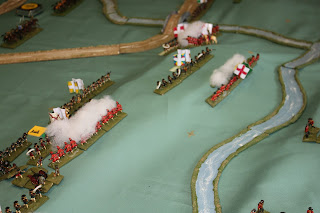 Volleys start to be exchanged. In the distance the Anglo Dutch battalion has disordered their opponents and then advanced to bayonet point, forcing them backwards. 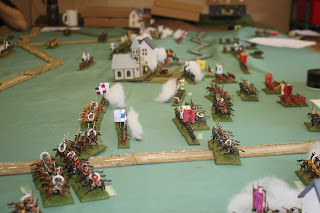 The Anglo Dutch launch further charges on their left flank. 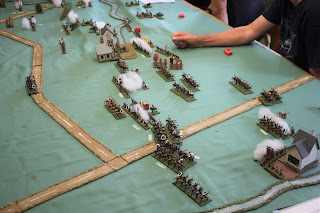 Infantry volleys are exchanged as everyone starts to get involved, and the Anglo Dutch try to turn the flank of the French army. 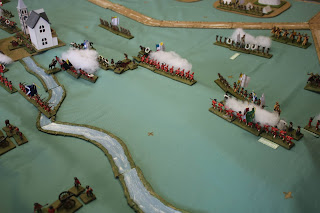 On the other side of the table the attack on the ridge by the grenadiers is bearing fruit, as they punch a hole in the centre of the line. However, as they push forwards they can see the rest of the French infantry deployed on the plain below them. 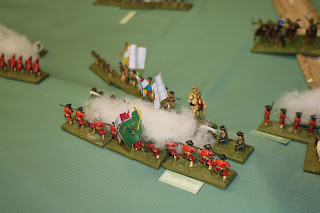 On the grenadiers' right volleys are exchanged, but the French infantry hold firm. 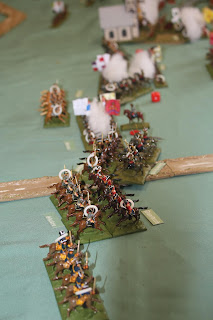 A large cavalry melee develops on the French right.

The Anglo Dutch infantry finally force their way into Ramillies. As the centre opens up they push forward some infantry in column to exploit the gap. 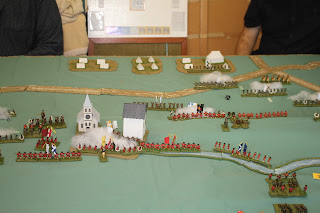 The French throw in a last ditch cavalry charge, push back the infantry in front of them and rout one of the march columns. To the right of Ramillies the Anglo Dutch infantry is breaking through with a remorseless advance. 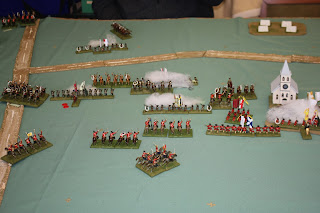 Too little, too late, however. The French declare they can't see how they are going to win, and don't want to experience a death by a thousand cuts. We call the game over as an Anglo Dutch win.

Not a bad outcome all round. Probably I was a bit harsh on the French in some areas, - I downgraded all of their commanders relative to the Anglo Dutch, which might have been excessive. I will go back and make a few changes based on experiences here.

I'm not sure where to go with the rules now, otherwise. They deserve further play testing and development, but my usual design cycle finishes with presenting the game at COW. By this point we'll have been at the rules most weeks for over 6 months, and that's a bit more than I can ask of anyone.

Perhaps as I've got some rebasing to do still I'll just take a short break from the WSS and revisit in the autumn when I've painted some more units.

And now, on to the next game, a bit of ironclad naval using a DBA variant.