An evening at Issus

MNG newbie Steve said he hadn't done any ancient wargaming, last time we met, so that needed to be rectified.

I settled on using AMW quickly as that's easily learned. I then chose Macedonians and Persians fairly quickly too as I think the phalangites look stunning. I was going to do just a "pick up" battle, but re-reading AMW I flicked through the Issus refight, and thought that might work quite well. So the table was quickly set up and doubling the number of units to 16 a side looked quite spiffing, so that was settled. For this game we used the General dice re-roll house rule we've used before, and also a single base in melee combat has to take a morale roll every turn to stop melees going on forever.. 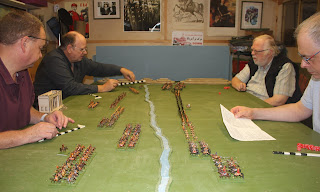 Will took the Macedonians ("Because they're going to be the winning side"), and Richard joined him. Phil and Steve took the Persians.

For this game I fiddled with the army stats a bit. I upgraded all heavy units to having medium armour, and I raised the quality of the Kardaces/Heavy Archers from Levy to Average. The Heavy Archers have a tough enough job as it is, without running away at the drop of a hat. 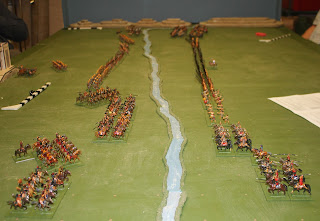 The set up was broadly speaking historical. Both armies had their heavy cavalry on their right, faced by javelin armed light horse. Will started off aggressively with the intent of crossing the river with Alexander and then going through the Persians like a knife through the proverbial. Phil told Steve to do the same - get out wide and get round the Macedonian flank as quickly as possible. 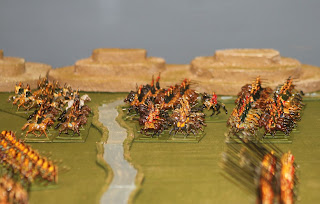 Phil appeared to be disputing the crossing, but in fact he was drawing Will in so he could use his javelins, supported by the bows of the Kardaces. Phil is the local master of light horse, so Will had no easy task. 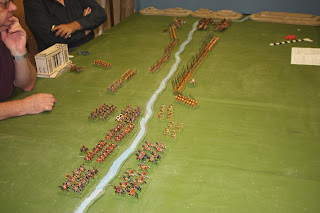 Steve is trying to do something clever with his horse to produce two waves. This is probably not a good choice as it takes up time and lets Richard get his troops into position to refuse the flank better. Soon the hanging around is causing a problem as Richard's archers inflict a couple of hits. 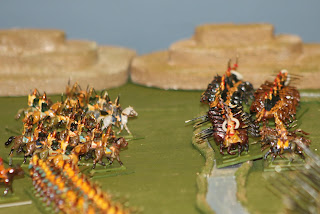 The Companions splash into the river, lead by Alexander. The Persian javelins are starting to take their toll (BTW how do you feel about the new back drop doing? I think it is making things clearer). 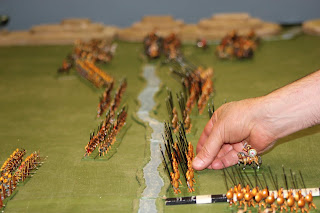 After some cajoling from his colleague Richard moves up to the river with his phalangites. Steven has halted his Kardaces so he can shoot at them as they cross. 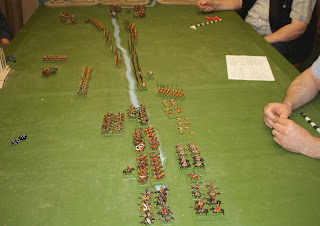 And the Persian heavy cavalry is into the river, taking a couple of hits in the process. Up at the top of the picture the inner most of the front Companions takes some withering fire from the Kardaces, and lose a couple of bases. That's a surprise. 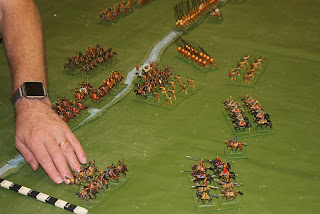 The various missile units on the Macedonian left have inflicted enough hits to take bases off three units. Richard had his light archers stand their ground to get another round of shooting in. He is hoping to hold the cavalry in place then take them in the flank with his phalangites. 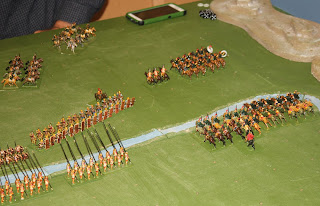 At the far end of the table it is carnage amongst the Macedonian cavalry from the hail of missiles. One unit down to a single base, and another carrying three hits. 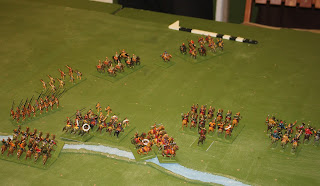 The Persian right flank is all a bit laboured, but Steve is getting there. Another cavalry unit into the river discourages the phalangites from attacking the open flank, and the others are fanning out to force the light horse back and open up the rear of the Macedonian centre. 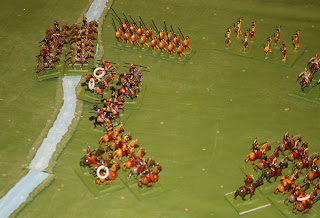 Without support the light archers are overwhelmed. Steve just now needs to work out how to unlock this end of the line properly. 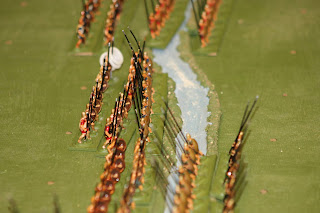 In the centre of the battlefield the Persians' mercenary hoplites strike lucky as their opponents fail saving rolls and a morale test to be reduced to half strength. There are muted Macedonian recriminations as to whether trying to cross the river was a good idea. 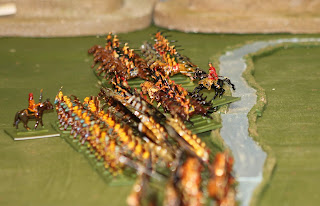 With no cavalry opponents to get his hands on Alexander leads a unit of Companions head on into some Kardaces. 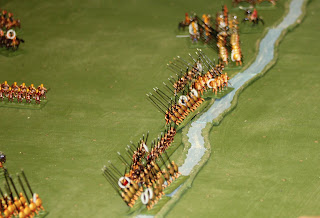 The melee now rages along the line of the river. Up top Alexander has taken quite a few hits, and the infantry aren't broken. 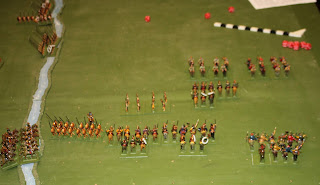 The Persian heavy cavalry has turned the position successfully, and are lining up to get as many units as they can to attack that beleaguered phalangite unit whilst keeping the light horse and javelins out of the way. Alas for them most of the targets they want to attack, - the Macedonian heavy infantry - are now on the other side of the river. 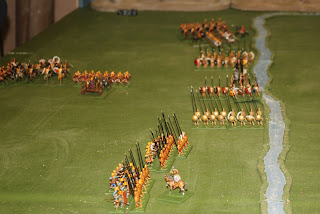 The game has moved on elsewhere. The Kardaces on the right of the Persian line held their position and didn't defend the river, to maximise the amount of shooting. They have now been caught by the opposing phalangites, lead by one of Alexander's subordinates. To the centre left the severely weakened Companions have been allowed to catch up with the light horse in an attempt to wipe them out quickly. At the top Alexander has killed one Kardaces unit, but it is taking too long. In the centre the line has become fragmented, and units of phalangites and hoplites are manoeuvring to line up opponents. 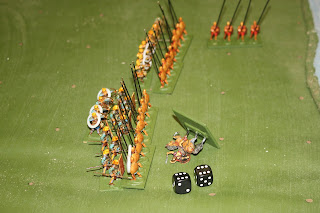 Following some dreadful attack dice rolling the Macedonian General commanding the centre intervenes personally to great affect causing 4 hits by using his re-roll attribute. Alas he dies in the attempt as well. 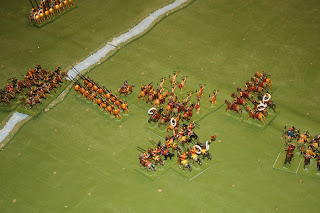 On the Persian right the cavalry are concentrating on clearing up the light infantry. The phalangites are rooted to the spot, awaiting the inevitable. 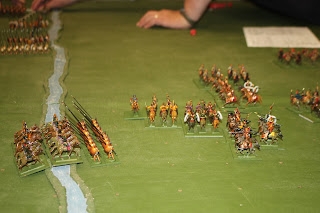 Finally Richard's nerve cracks, and he swings round to attack the horse on the river bank. He needs a quick win here, as the Persian horse won't be tied up killing the skirmishers for too long. 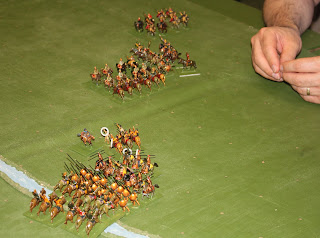 The skirmishers actually strike gold. They inflict a hit, which knocks off a base, and the unit fails its morale test and so loses another. The other Persian horse piles into the rear of the phalangites. At the top of the picture two units of Persian horse have finally pinned one of the Macedonian light horse units in melee. 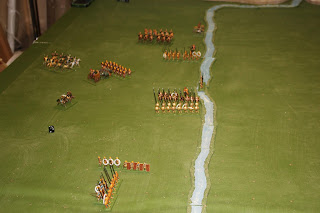 Units are disappearing fast now. One of the Kardaces units under Steven's command lucks out and kills its phalangite opponents. 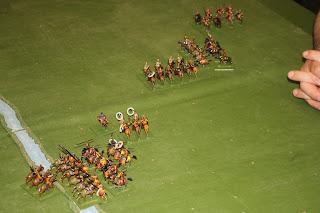 The phalangites on the river kill an opposing base, but are soon reduced to half numbers. The skirmishers are still holding on miraculously. The Macedonian phalanx is down to half numbers 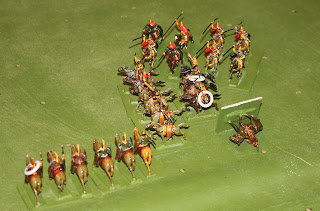 The other Macedonian light horse charge in to try to extricate their colleagues, but fail. However, the Persian right flank General does die in the attack. 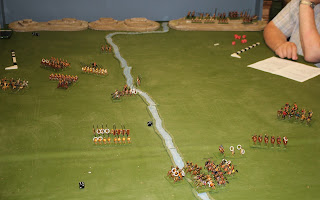 The centre is bit empty now. The Hypaspists and Apple Bearers line each other up, each with their C-in-C behind them. Could this be the climactic battle? 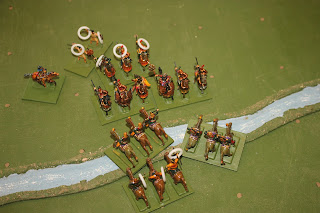 The phalangites finally keel over and die. It has been a hard slog.

As it was nearly midnight we stopped it there. It had been a gripping game, and I reckoned a marginal Persian victory. 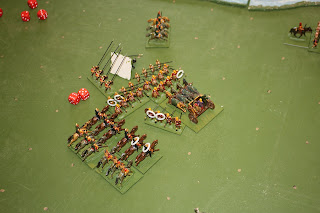 When I went back into Shedquarters this morning to tidy up I couldn't resist running through a final few moves to see what happens. The Apple Bearers and Hypaspists hit one another and traded base losses quickly which works in favour of the Persians. Alexander was killed just as his last full Companion unit ran into the flank of the Apple Bearers. 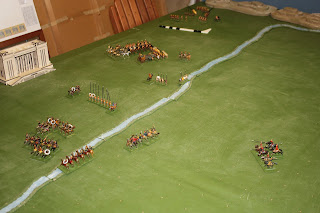 The surviving Persian cavalry was now flooding back across the river to mop up the loose Macedonian infantry remnants. The Persian light horse at the top charged the Companions in the rear to even things up. 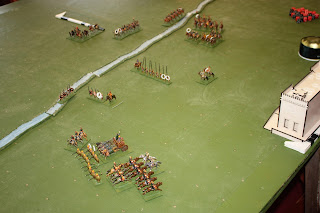 The Hypaspists die to the last man, and with some other bits and pieces the Macedonian army is now at break point, so it was a Persian win after all.

It was an engaging and intense game. I don't think anyone realised how long we had been playing (about 3 hours), and fortune swung both ways. The light horse had real impact on the game, being evasive and also effective with their javelins. The really did a number on their heavier opponents.

On reflection the armies were probably too big for an evening game, but with two a side we needed enough to keep everyone occupied. Adjusting the factors as described above kept the Persians in the game longer than normal and extended most of the combats.

So, all in all very satisfactory.
Posted by Trebian at 20:55