I grew up in Rugby in Warwickshire. Someone has to. I suppose everyone has a downer on their home town. Rugby has never been cool. We didn't even have a cinema when I was a teenager.

I don't suppose we realised how lucky we were in some ways. We had several good local model shops, and a really good book shop too, because of the proximity of the Public School in the town.

The book shop was George Over's. It was a big shop, with a model and arts supply department too. I could spend most of a Saturday morning in there, and then go up and leaf through the hobby section of the book department, poring over Don Featherstone's latest book, hoping no one would buy it for another week, please. They were also a printers, and did the big Lord of the Rings posters before we had all the movie stuff*. Due to town centre development they moved from their Clock Tower location to a smaller unit in the High Street, but still had good model and book departments. Due to the internet or whatever they went bust or closed sometime after I moved away.

But we were lucky to have a model/hardware shop that did kits and things like "dope" and balsa aeroplanes and all that stuff. Sort of like the Model Shop we still have in Northampton that I wrote about last year. This was known as "Moore's" and was virtually opposite one of the town's secondary schools. You had to go upstairs to the modelling department and that climb up the narrow stairs was full of anticipation. That's now a shop with wheelchairs and aids for the old and infirm. I have no idea when that went, although in my later years in Rugby the quality and quantity of stock was declining. The oddity was Wilson's of Bilton which was a newsagent in a nearby village, within a short cycle ride. That had a whole wall of Airfix kits. Everything you could imagine from bags to blisters to boxes. I used to love riding out there during the summer holidays with my pocket money. That's gone now. I think the shop has even been knocked down. Again, however, by the time I was a sixth former the quality and stock was declining. 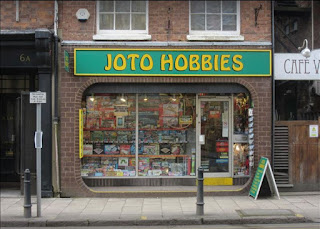 And then Joto Hobbies opened. It was set up by a couple of railway modellers, but it had a full range of kits and modelling supplies too. The guys who ran it knew their stuff and were so helpful too.

I would regularly pick up paint and modelling supplies from it. I was buying metal figures by this stage anyway, and cycling out (and then driving) to Bedworth Art Supplies, who stocked Minifigs (and then from the New Model Soldier Shop in Sheffield when at University). But I did buy my first acrylic paints from Joto, - Humbrol's "Badger" range.

And it survived. Nearly 40 years. Every time we go back to Rugby to see family I try to nip in and have a look. If they've got any boxes of figures I have half an interest in I buy them, just to support the shop. If you don't support them, then they'll be gone.

But alas a few days ago we got a call from my wife's step mother saying that they'd got a closing down sale on. Hobbycraft has opened up on the big out of town retail park up near the M6 and they just can't compete. I guess that the upstairs area with the needlepoint and all the other non-modelling stuff was key to their profitability, and they just can't compete with a bigger shop with parking right outside.

* Actually my memory has played me false here. I woke up in the night and remembered it was actually Jolly & Barbers.
Posted by Trebian at 22:17