Chewing the fat at Partizan with Mr Baccus

My, my. Partizan comes round quickly, doesn't it? We were back with the Northamptonshire Battlefields Society and Society of Ancients double act. Phil was at least double booked, so he only made the morning, bringing the display materials and helping setting up. I covered the stand all day, with some support from Will, Paul M (from NBS) and Matthew Hartley, editor of WD's magazine, "The Nugget". Matt had promised to turn up with a crate of old Airfix figures which included some Washington's Army figures. He did, and we all had a good rummage. 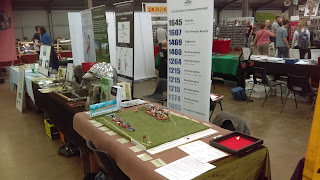 Even with reduced display materials we still put on a pretty good show. We weren't rushed off our feet. We played 1460 twice with two Lancastrian wins (very rare!). The low footfall gives time for deeper, longer, conversations which can be more enjoyable, but there was also a lot of standing around. We had one person who sneeringly wasn't interested in what we had to say as he "didn't do board games". I did point out that 1460 started out as a figure game, and that none other than Harry Sidebottom was rebasing his WOTR toys to play it with figures, but the current absence of any 28mm steroid fuelled masterpieces damned the whole thing forever in his eyes.

Luckily I was able to hit the trade stands early on and picked up a number of books (I miscalculated on my running spend total, and over spent by about £30, but mainly because I had a list of books I was interested in and oddly pretty much all of them were in stock) and a packet of figures from Red Box's Jacobite Rebellion range. I'm looking to sweat the usage of my WSS figures. A man in a tricorn is a man in a tricorn. 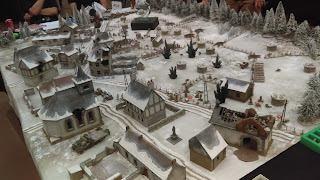 Lots of good looking eye candy about. This winter game won an award, although what the criteria was for giving it I can't say. 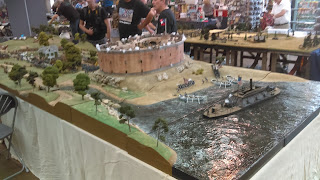 This 40mm ACW combined naval/land game caught my eye. It looks impressive, but it isn't the sort of thing I'd knock up for a Monday Night. 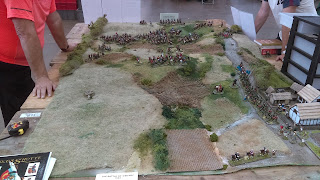 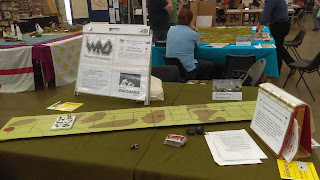 WD had "Cliches of the Great Patriotic War" which is a lot of fun if you get a chance to play. 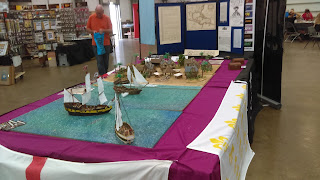 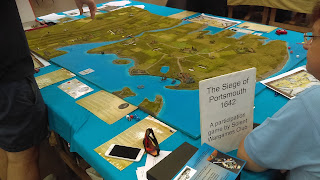 And I'd have liked more time to discuss this game with the people concerned, as it looked like an interesting approach to gaming the problem. Plus my daughter lives down that way.

Then it was time to pack up and come home. I wonder whether Partizan twice a year is too much, but in the absence of Derby I wasn't going to drop another show in 2018. Next up we're at Hereward in Peterborough, and then probably Recon, up in the North..
Posted by Trebian at 20:37