For this month's dose of SPI-style board gaming fun Gary pulled out "Fighting Sail" from 1981. He was inspired by playing the Ironclad Naval game at the last gathering we had at Shedquarters, when we did the wooden ironclad DBA game.

"Fighting Sail" is basically a game for Napoleonic period frigate actions. As it is a game produced by Americans it has a lot of early US Naval actions, including the War of 1812. The biggest ship in the counter mix is HMS Victorious, a 74 gun 3rd rate ship of the line (by contrast HMS Victory, a first rate, carried 104 guns), and the largest action in the scenario list has 11 Royal Navy ships v 8 French. Typically the scenarios are single ship of two/three ship actions. I suspect because of the way the game works that the big scenario would be pushing the system to the edge.

The game has some oddities about it for an SPI game. The board consists of squares, not hexes, and the ship counters are oblongs not squares. 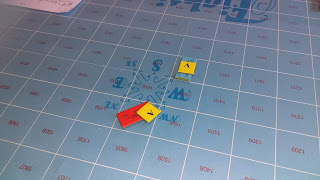 The non-use of hexes seems odd for a naval game, as they are often used. The squares, however, fit with the compass rose better and the movement point system in theory deals with the normal diagonal movement problems. The game uses 2 points for orthogonal movement and 3 for diagonal (on a 2 "unit" sided square the diagonal is 2.82 units, so close enough to 3 for all intents and purposes, - I use this in "Redcoats and the Sudan, which you can find above).

The firing mechanism is quite ingenious too, using 2d6 as tens and units. Hits are adjusted by size of ship as well as all the other normal variables like range, and there's no knocking off of hull points, just a simple hull hit/critical hit mechanism. The clever initiative mechanism gives choice of who moves the next ship to the fleet with the weather gauge, which is determined by which ship gets the most movement points in a turn.

Neither of us had played the game before, but in about 5 hours or so we played 5 of the scenarios. Victory often went to the more manoeuvrable ships (see what I said earlier - this is a game for frigate actions not hard pounding). I succeeded in winning the Hornblower Lydia v Natividad scenario without taking a single hit, for example, by keeping the wind gauge and stern raking the Natividad repeatedly. C S Forester would have been proud of me. 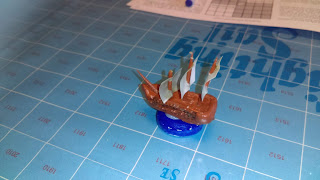 Of course the game cries out to have model ships used with it. Gary had been busy with some oven clay and turned out some examples. 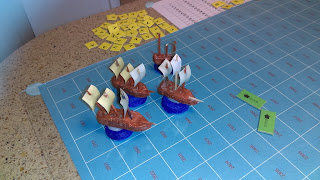 He's having issues with making the masts removable, and I suggested he should really look at waterline models, but otherwise very commendable efforts.

We both really enjoyed it. Russell, my SPI guru, says "Ah, one of my very favourite SPI games.... Beats all opposition hands down, and I've played all of the scenarios more than once". I agree with him that it is a very good naval game, and would urge anyone who has interest in naval wargames to seek it out. You can find a scan of it here.

And as far as I can tell there's no errata for it either, s well done on the design and playtesting.

All I need to do now is put all of the ship stats into a spreadsheet and see if I can crack how they calculated the game values.

Then we can have dome proper big ships on the board.