One Hour Wargame in the West

Finally we resorted to Neil Thomas' "One Hour Wargames" as we had about an hour before heading off for dinner. Someone shouted out a number at random ("21!") so we did the Dual Objectives scenario. We then established Richard had some 7 Years War figures that hadn't been on the table yet, so that sorted the armies and the period. We had to cheat on the random armies as the cavalry isn't finished yet, so we had an infantry & artillery battle, Austrians attacking, French defending.

We doubled the size of table, ranges and moves as these are big figures and units. There was a need for general chivvying along as we needed to get this in before going down the pub, plus, in my view, if you take too much time over OHW you rather defeat the point of it. It has to come and go quickly without over thinking anything. 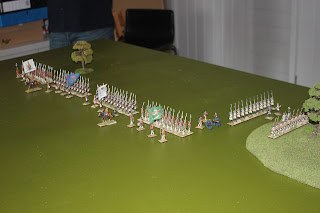 Here's the Austrians in their deployment area. The have to capture the hill... 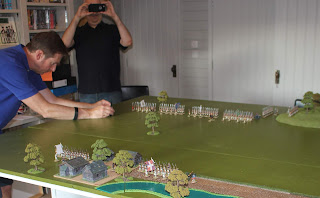 ...and also the town near the camera. Don't pay too much attention to the buildings; they're my old RCW buildings, and they're covered in political posters. Anyway, having put everything out we stopped to take pictures. Chris took the Austrians and Richard and Phil, the French. I umpired in order to keep the game moving. 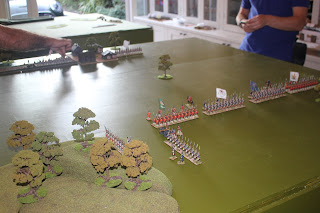 The French put light infantry in the wood, which Chris attacked with his own light infantry and artillery. His regular foot then started their steady march to take the town. 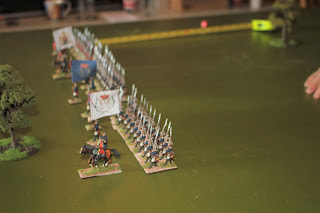 They did march steadily, so far unaffected by some 1 rolling artillery. 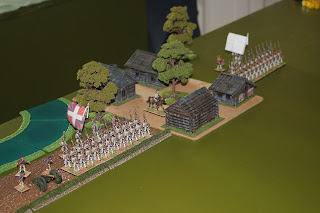 The French chose to defend the town from either side of it, rather than make it a strong point. 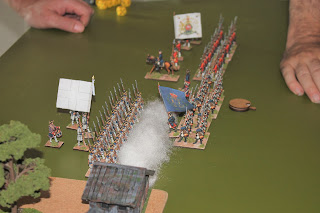 The French got in the first volley, which is often telling in OHW, but they were now pinned in place whilst their left flank was turned. 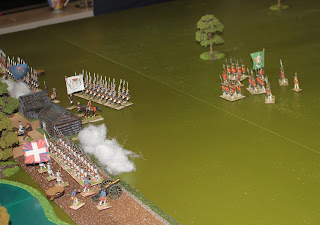 Heavy musket and artillery fire broke one of the Austrian infantry units... 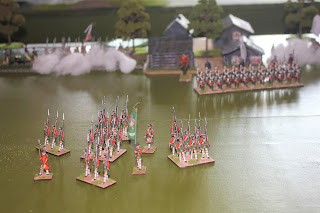 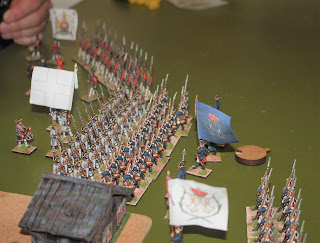 Meanwhile on the French left bayonets were being crossed. 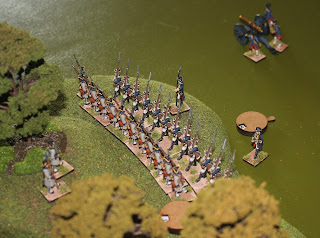 Having inflicted some damage Chris charged into the woods. In truth he was losing out on the fire exchange as the French were in cover, so it was this or death by a thousand cuts. 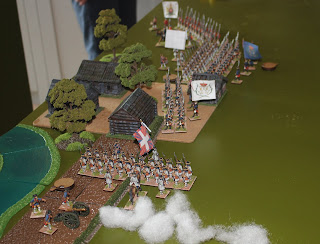 The Austrians have marched into the town, and the French are now counter attacking. 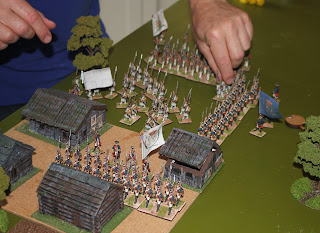 With 2 on to 1 the French left flank soon folds (NB  I think I might have played this wrong. I thought the rules allowed for an attack on each facing of a unit. I think what they say is only one unit can melee another in any turn.) 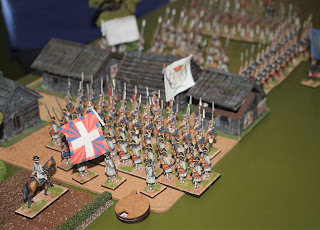 The epic struggle for the town begins. 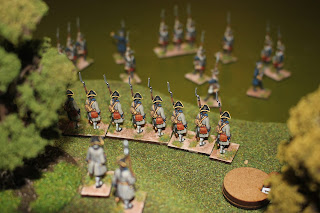 At the other side of the table the French clear the Austrians out of the wood and off the hill. 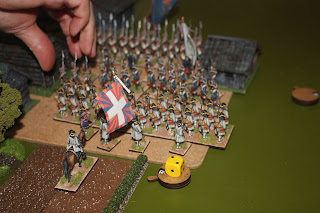 The French are getting the worst of it in the town. The die on the top of the counter indicates they have taken 14 hits (the counter only goes up to 12) and they break on 15. 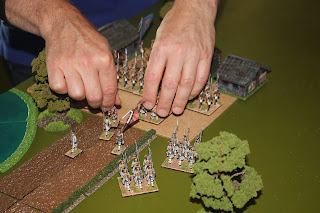 Soon enough they have gone.

In the woods the French light infantry have retreated to a corner to make it hard for the Austrians to dig them out, but alas with another 7 or 8 game turns left we reckoned the Austrians would soon bring overwhelming force to bear, so we said it was an Austrian win and went down the pub.

And that rounded off our day's gaming. Neil Thomas' scenarios always provide some fun, but I think it is important not to dwell on these things too long, as the rules don't always stand up to detailed scrutiny. It is important to get on with it and move on to the next game if you can.

Alas with it taking a fair while for food to be delivered in the hostelry it was time to head for home, pretty much, when we were finished eating, so no after dinner game. Still, an excellent day out with much fun had by all.

Even me, who didn't win a game of any sort.