Plastic Fantastic and Not

I managed to squeeze in a couple of painting sessions over the last few days, so I started on the figures I picked up last time I visited the model shop in Rugby that I wrote about which is closing down.

These are Hat Italian Allied Cavalry from their Punic wars range. I have put off buying any of these for close on 10 years now (just checked - actually 15 years) as I finished my Republican Romans and Carthaginians and had enough figures for all the options in the Army Lists for the rules I was using at the time. I had added units from the Infantry Allies box, but I never went fully into making pairs of legions with one Roman and one Allies. With the Society of Ancients Battle Day next year being the Battle of Telemon I thought I should have a look at my Republican Romans and Celts. I need to beef up the Romans and paint some of the Celts I have been accumulating over the last decade.

So when I saw a box each of the Italian Ally Cavalry and Infantry in Jotos I picked them up with the closing down sale discount. I need a box or two more probably (and maybe some rebasing...) but it is good to get a start .

As it is a Hat box, so to speak, you don't get lots of variety in the cavalry with 4 poses and three sprues. The poses aren't anything clever, but are understandable for soft plastic figures.  They mostly have ring hands for javelins, with one figure needing the plastic javelin removing and replacing with a pin, as usual.

The horses have all got body armour, which is probably excessive but looks nice. Same with the feathers. I suppose I could take the feathers off, but what the heck, they look nice. 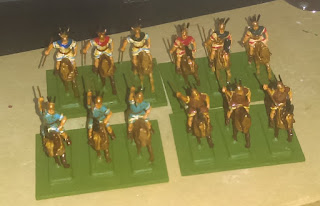 I think another box will do me, for now. I'm at Hereward in Perterborough this Sunday, so I might get some there.

So, some nice looking figures that have painted up quite nicely with my normal technique. The depth of the carving on the figures isn't excessive but is just enough to take the tinted varnish.

So that's the Fantastic Plastic. Now for the less so.

As I reported in my blog about my visit to the Other Partizan I was the recipient of some very old Airfix figures including some Washington's Army and some others from a WD wargaming friend.

The Washington's Army have been separated out and bagged up in battalion sized units ready for painting. When I was doing this one of the figures snapped of its base, which was annoying but not a problem as I had some spares.

I then turned to the Waterloo Highlanders. The aim with these is to take off their packs and feather bonnets and turn them into Highland units for the '15 & '45 risings both Jacobite and Loyalist.

Alas this didn't go well. Firstly the muskets started to break off when I picked them up. Then as I carved them they started to powder away... 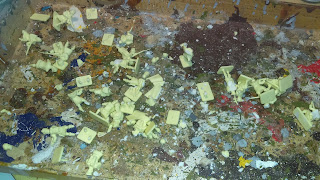 ...and simply snap off their bases, and then arms and heads just came away. I have never seen plastic figures become so friable. I've heard about it as a problem, but I have figures of this vintage and never had problems like this. 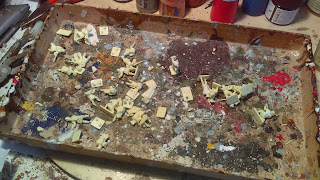 I then thought I'd just need to sort the figures and find the ones that are good, but none of them are good. The ones that might just make it are losing the ends of muskets, and I'm now worried that even those that feel solid will come apart when I use them. I resolved that if the musket won't flex back when you bend it then the figure has to go.

So far I've got none that have passed that test.

And I've got a tray full of Ancient Britons from the same source that seem a bit fragile too.