A few years ago I won some figures at a Society of Ancients battleday (2006, in fact, but who's counting?). The prize was some 28mm Gripping Beast Crusaders and Seljuks. Enough to make up a few Retinues to use with the rules of the same name that I bought back in the 1980s.

I painted a lot of them shortly after I got them and have painted the rest on and off over the last decade. But on looking at Retinue again I realised they were horribly complicated by modern standards and close to unplayable without a lot of effort.

However, I have a lot of fond memories of playing a scissors/paper/stone based set of medieval rules when I was top end primary/lower secondary school we got out of a Featherstone book - "Solo Wargaming" I think - that were written by Gerard de Gre, I couldn't find a full set on the interweb, but I got enough clues to enable me to reassemble them, near enough, and plug the holes in a suitable simple fashion. 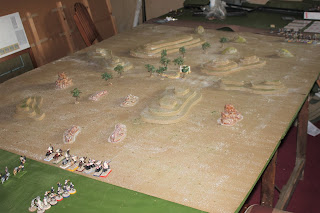 As I'd been wargaming all the previous day, and out all the weekend, I threw a few ideas together quickly and pushed some terrain around the table until it looked right.

The Crusaders have to cross the table with their baggage train loaded with valuables and relics, stopping to water them at the oasis in the middle of the table. The Muslims were in ambush. Their forces were placed on the 8 large playing cards you can see top right. They then had 8 chits numbered 1-8 they placed face down on the table where they wanted their forces to be hidden. Their aim was to cut up the Crusaders and escape with the valuables and the baggage animals. For this game I was joined by Phil (Crusaders) and Chris K and MNG newbie Steve (Muslims) 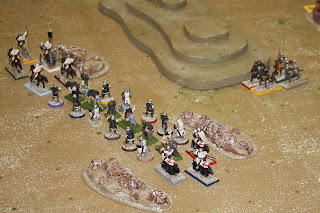 The Crusader column observed good march discipline at first. Unable to wait, the first ambushers emerged, shooting at the column. 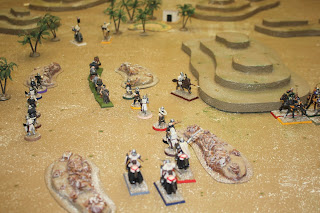 More ambushers appeared off left, causing the defensive line around the baggage to expand. The Muslim archery hit a foot man (signified by a white ring). Knights/armoured figures can absorb 3 hits before dying. 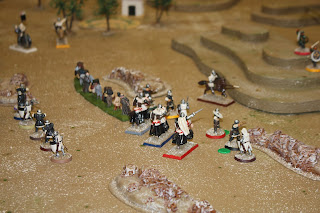 The crossbowmen start to return fire. The green markers indicate if they are loading. 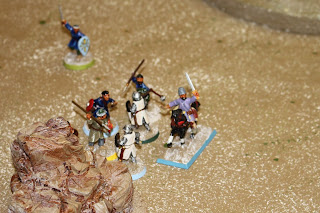 A fierce melee ensues off to the left. Outnumbered and surrounded two knights have lost their horses (basically the horses take the first hit if unarmoured, or two if armoured). 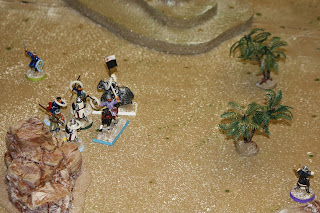 Another Knight charges in, inflicting hits on the more lightly armoured Muslims. 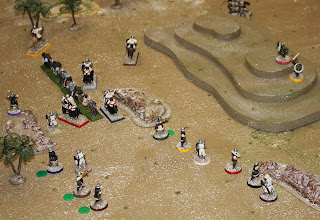 The Crusaders are keeping they marauders at bay, as the baggage plods onwards. 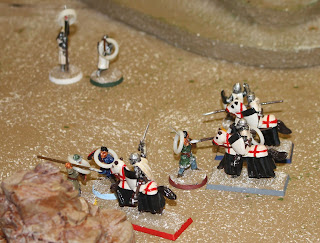 The little melee out on the left drags in more participants. 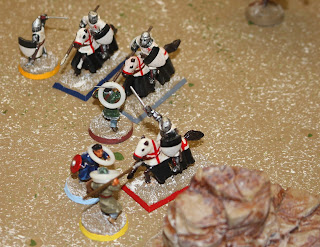 The Crusade have the upper hand at last. 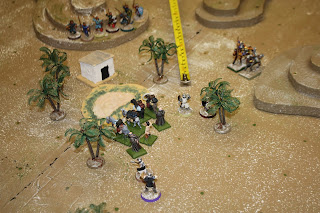 As the baggage animals get a well earned drink, more ambushers emerge from cover. 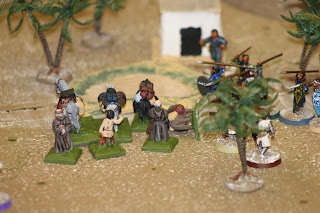 For some inexplicable reason Chris has interpreted "capture the animals and make off with them" as "stab and kill anything with a load on its back". Cue question "Can we eat dead mules? Are they Halal?". I thought not. 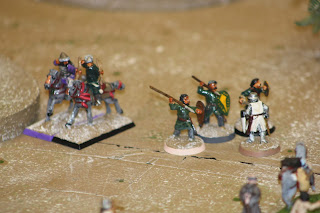 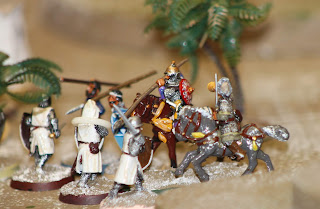 A fierce tussle breaks out round the waterhole, as the Knights counter attack. They steadily gain the upper hand 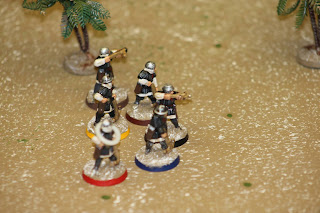 Meanwhile, at the rear of the column the massed crossbowmen prepare to shoot up the next group of Muslims they see.

So we ended with a Crusader win, as the Muslims were forced to withdraw with heavy casualties. Alas for the Crusaders many of them are walking the last bit of their journey, due to heavy equine casualties.

The rules provided us with an enjoyable few hours but aren't anything clever. The joy is in the scenario puzzle and pushing the lead about. Phil reckoned I need to look at Andy Gittin's "Gladiolus" which was originally published by the Society of Ancients, and uses a modified scissors/paper/stone combat system.

Could be just the thing.
Posted by Trebian at 09:59