Following our initial trial a couple of weeks back I thought it would be good to give Hexblitz a go in the Spanish Civil War, using my offset squares. Hence "SCW-are Blitz". Geddit? It's like "Squareblitz", only I've spelt square with an SCW, for "Spanish Civil War". 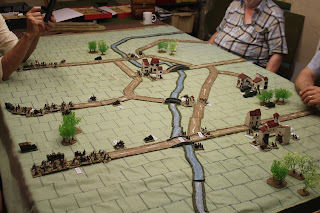 I put this together in  a bit of a hurry, and it showed. I worked through the unit strength points and got Bob Cordery to check them. After the last blog he sent me a set of rules to work on for this variant.  As many of you may know, Bob is an SCW buff of the first order. So I went through Hexblitz and amended what I thought I'd need to change in order to make them a bit more Iberian. I was going to do a refight, as that sorts out terrain and orbats, and is usually a doddle if you have a gridded playing area. That's because I scan maps from books then size them to scale using a drawing package and drop the offset grid on the top. You can then just lay the terrain out as close as you can get. As none of the maps I had to hand had a scale on them that went out of the window. Then the number of likely players went from 2-3 to 4-5, so I needed something big with several commands aside.

In the end I used the tried and tested method of just putting bits of terrain on the table until it looked nice. I then decided the Republicans should defend with two Divisions, and the Nationalists attack with three, including some SFL. In the picture above the Republicans are to the right.

The river has four crossing points but is otherwise impassable. The Nationalists have an engineering unit with bridging capacity. I expected to play a couple of days, so there are lorries with LOG units about the place, which are represented by having white pins stuck in them. The Nationalists have several major roads specifically put out to enable them to close the distance quickly.

Units don't have strength point markers on them. I have a schedule of unit strengths, and intended to mark reductions in my normal way.

Phil & Chris, who were playing the Nationalists, hatched a plan that might have been more complicated than it needed to be. Will and returning MNG'r Richard were lumbered with a poor set up because I did it. 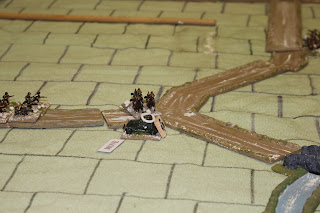 The first combat was when Recce squadrons encountered each other. The Republicans got shot up and had to retire. 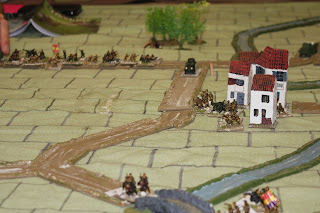 The Nationalist recce then headed off to inspect the stone bridge to ascertain the strength of the defenders. The role of recce in the game was much discussed. 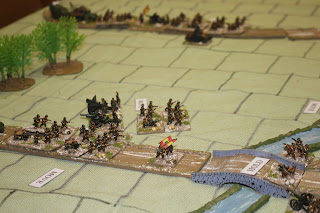 On the right the Nationalists pressed forwards, their flag waving Divisional HQ leading the way. Guns, including a Heavy Artillery Grupo, are being pushed out a little wider to provide supporting fire for the inevitable assault on the bridge. 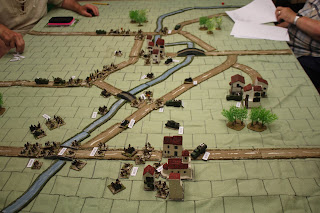 For Hexblitz players, Move = Move, Form = Stationary, Hold = Defend. The Divisions are being reconfigured in an ad hoc fashion to force all the crossings and defensive points at once. The bridging unit is moving forwards, keeping the defenders guessing where it is to be deployed. The Condor Legion's tanks are pressing on the central bridge, threatening the defenders. 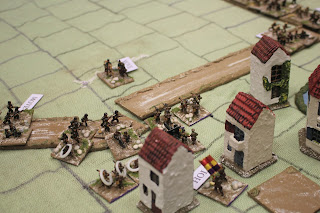 The first attack goes in on the town on the Nationalist side of the river. Combats are a bit of slug fest if people are dug in. 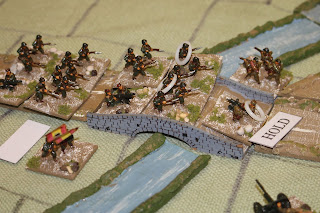 The attack on the right flank bridge goes in. The defenders hang on, whilst the Divisional commander rushes up reserves. 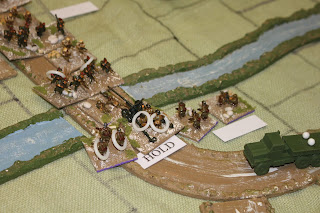 Over on the left the SFL go in with a couple of Banderas and a Tabor. The defenders are heard to say "They have how many strength points??". I think the attackers were surprised too (although I did say...), and might have been a bit more aggressive if they'd realised exactly how good the Legion are. 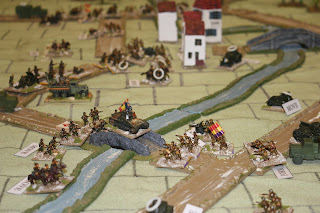 The Condor Legion's Panzer 1s leads the charge over the bridge 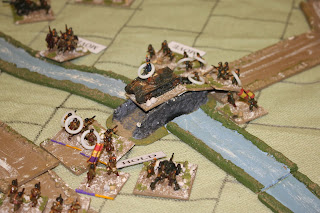 The fisrt round of combat is quite bloody... 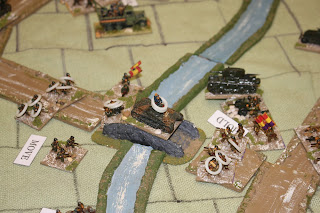 ...but then the T-26 Regiment adds its weigh in a fire support role. The first round of firing is devastating. 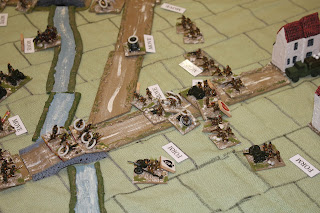 The Nationalists seized the right hand bridge at last. 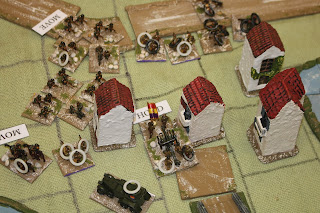 And in the centre a two brigade assault yields dividends. 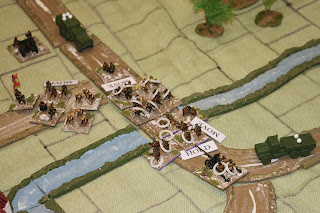 The attack on the left stalls a bit, but the defenders are one turn away from having to withdraw. 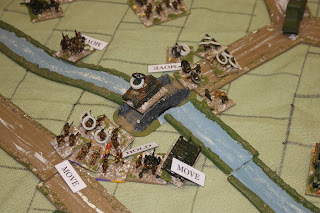 The Nationalists bring up reserves in the centre, but the fighting is so fierce I've run out of white rings. 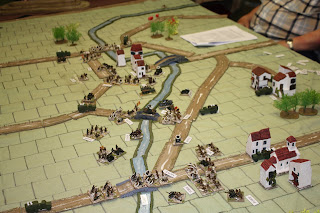 When people had to go home, - after about two hours of game play - the Nationalists were winning everywhere, but it was proving very hard for them to make a breakthrough. We'd played about 6 turns, - 12 hours of the first day.

Reflections? Well, Hexblitz has its origins in a set of rules for solo play for fairly small sized encounters. With four players and a three Divisions almost a side it might be we're pushing the limits of what Hexblitz is good for. Some felt that the card/move status combination slowed the whole thing down too much. I think we will get faster once we're more familiar with how it works, and I'm more confident running it all.

As I said I have started to make the odd modification for SCW purposes. Units in towns don't use LOG, for example. However, the SCW armies were more flexible in many ways and forcing Divisions to have units close together might not be appropriate.

I have a choice or two to make. I want an operational SCW set of rules. I've looked at Op14, but fear it is stretching it too far. It might also be the case with Hexblitz. Megablitz might be the answer, or a re-working of NQM. I'm just not sure which way to go yet.