Richard said he wanted a Sudan game next, and who am I to disappoint? We played this with my 15mm Peter Pig miniatures and "Redcoats and the Sudan" rules. Richard, who is mostly a "big figure" kind of guy really liked the figures, but he has his heart set on some Peter Guilder 28mm stuff. I think he needs to come round to the idea that if you are wargaming armies wandering around in large empty spaces, - which is basically what happens in the Sudan - then you need to use smaller figures, really. 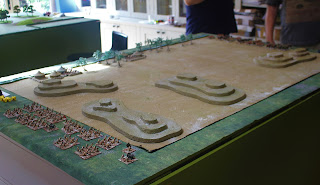 The scenario was two British brigades with a mounted column were trying to find and destroy some Mahdist forces hiding in some hills and villages. This is loosely based on the Battle of Ginnis, supposedly the last battle where the British army wore redcoats. It's also one of the rare battles with combined Egyptian/British brigades. 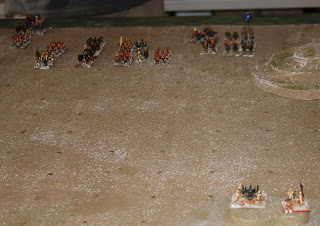 Richard took the mounted column, Chris got the brigade with the Egyptians near the river, and Phil took the centre. I ran the Mahdists as the umpire. I had a clever hidden movement/concealment mechanism as I thought we were going to have another player join us but in the end it was quicker and easier for me to wing it as the umpire.

The British moved forwards steadily. The mounted column were supposed to be recce-ing out front, but lagged behind due to some poor die rolling. 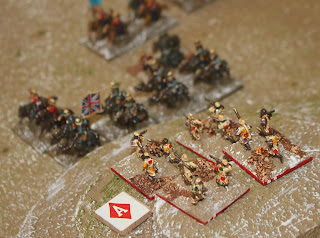 They were also fairly careless about where they were marching, and moved in a bit close to one of the lines of hills. Soon a small force of Ansar emerged on the ridge line. 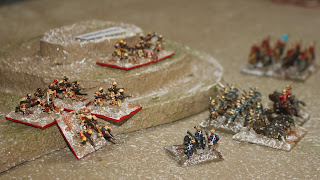 A rapid dismount and some volleys from the Camel Corps and the screw gun battery soon halted them but another rub of believers emerged immediately and surged down the hillside... 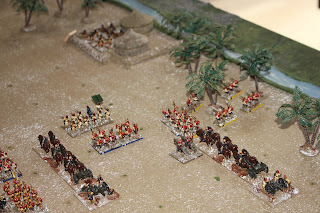 Meanwhile over by the river Chris tried reconnaissance by marching through terrain with his brigade. 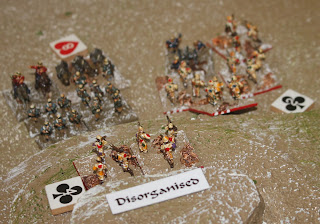 By virtue of drawing lower cards the Mahdists on the ridge overwhelm the screw guns. 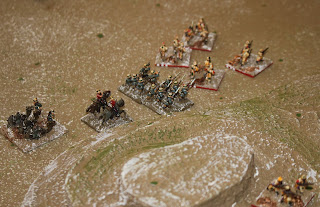 Having seen off their opposition, the Camel Corps turn a sharp left and break the Mahdists with disciplined volleys. Alas too late to save their Artillery colleagues. 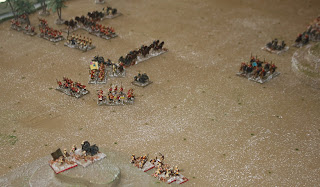 With the cavalry scouts still proving laggardly Phil adopts an arrowhead formation to prevent his troops from being surprised. 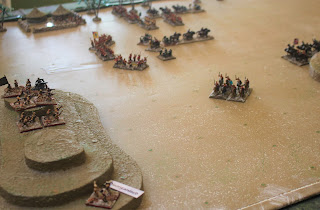 The first Mahdists emerge from the dense rage of hills at the Umpire's end of the table. The cavalry is finally getting to where it needs to be. 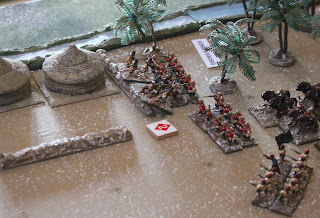 The tussle for the first village begins. A ragged volley from the Mahdists inflicts some Disorder, so they storm out of the village screaming their fearsome battle cries. 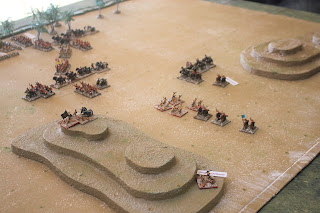 Richard has finally got his cavalry out into a reconnaissance screen, and is able to evade the onrushing fanatics. 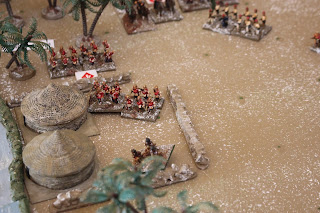 The Redcoats win the melee and force their way into the village. 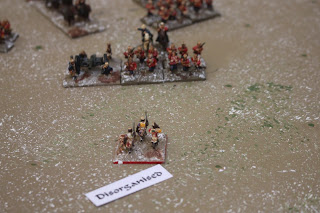 In the centre a rub of Mahdists is severely reduced in numbers by rifle fire supported by artillery. 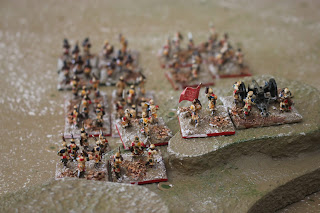 The trap is now sprung, as hordes of Ansar stream over the hills. It might be a bit early for them. 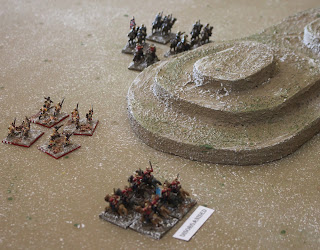 The Camel Corps are caught mounted by a Mahdist rub, and retire quickly towards their baseline, whilst their cavalry colleagues line up for a charge. 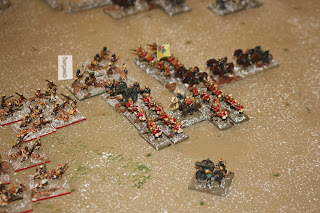 The Mahdists rush the Thin Red Line. They are held at bay by sustained firepower. The Gardner gun is particularly effective. 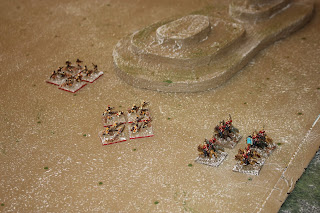 Richard, meanwhile, is dancing around with his cavalry to keep two units of Mahdists from overwhelming his Camel Corps as they reform. 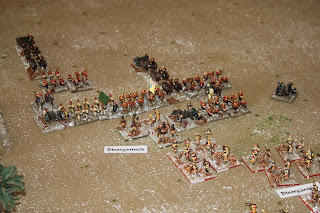 Chris' Egyptian move up into line, adding to the Mahdists' discomfort. 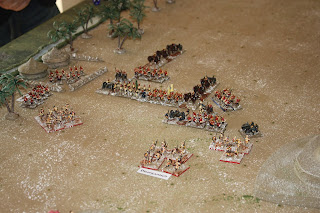 The British finish clearing the village, and are now in a strong position in the centre. 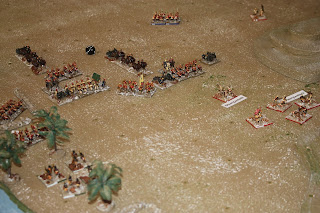 More rifle fire disperses the remaining Mahdists, leaving the forces of the Empire masters of the field.

Everyone proclaimed themselves to be very happy with the game, which had a nice rhythm and narrative. It was Richard's first exposure to these rules, and he enjoyed them. There are issues with them and I was going to rip them up and start over, but a conversation in the car coming home and a subsequent period of thinking has convinced me I can iron out the things that don't work so well in them.

But I'm on a two game losing streak now.