Time for my monthly boardgaming day. Only today we did some table top wargaming instead. Gary is getting quite keen on naval games, so I put on some ACW Riverine action.

I have always loved this iteration of HI. I have played the new version on the hex mat, and it is a good game. However I love the cardboard hexagons and the slightly rough and ready feel to it all.

As a learning game we started with the classic Hampton Roads scenario. I got the Monitor (far end) and Gary got the Merrimac/Virginia. 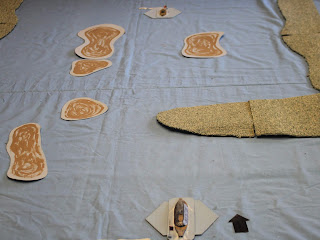 Bit lighter on the sand banks than the scenario suggests, so I popped in a promontory to close the river up a bit. 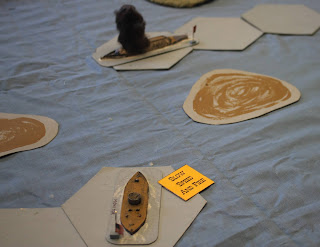 After a bit of nifty manoeuvring I got in the first shot, and caused a fire on the Virginia. My main concern here was that this meant I was going to get a full broadside from the Reb Ironclad in the near future.

This duly happened and I took some damage. Luckily I survived a critical hit on the turret. 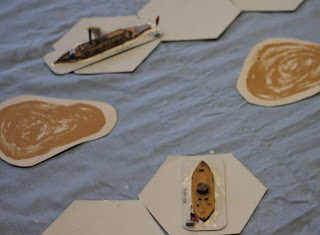 The Rebs quickly put the fire out. But the next time I fired I got another critical hit, and succeeded in knocking out the Virignia's engine room, marooning her mid-river, at the mercy of the river flow washing her down on to a river bank.

Having got the basics of play sorted, we moved up a gear. We tried the scenario where a fleet of mixed Union ships has to sail up river, and fight its way past a Reb blockade so they can support a land action. 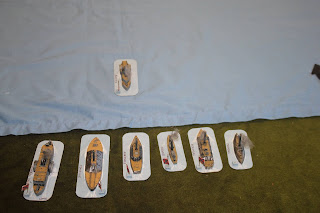 I got the Rebs this time. Here's my fleet. 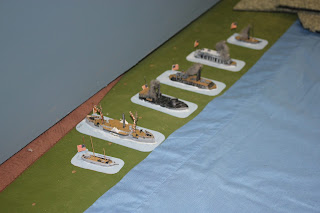 Gary has a bit of a mixed bag. Those Yankee ironclads with full broadsides use up a lot of points. 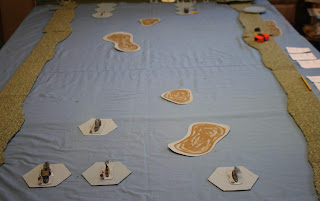 After turn one I've got 4 ships on, to Gary's two. My aim is to fight him as far up the table as I can, to stop anyone breaking past me and dashing off my table edge. 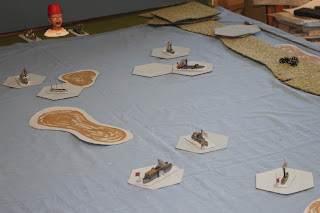 Having feinted to the left I'm now switching to the right to try and get several ships on the Sandusky, as she's a nasty looking monitor. I've had some new arrivals to cover my left, slowly steaming up the table. 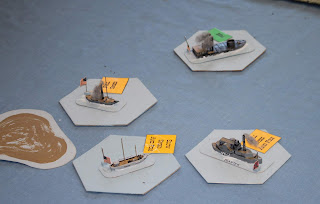 I mis-estimate the movement distances, and it allows Gary to get local superiority on the Planter. The Dunwich has a heft punch at the front with one Heavy and one Medium gun. 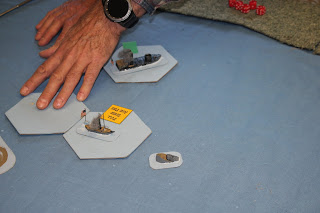 The Planter succumbs. I think she was even rammed by the Dunwich, which all came as a bit of a surprise as it sank her outright and the Dunwich got away pretty much scot free. 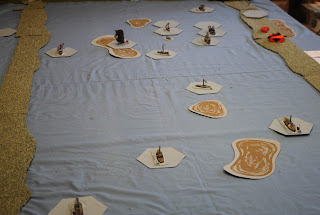 I did succeed in hitting the Dunwich as she veered off across the sand bank, and got her to catch fire. Elsewhere my three ironclad rams start their slow, steady progress downstream, line abreast across the river. 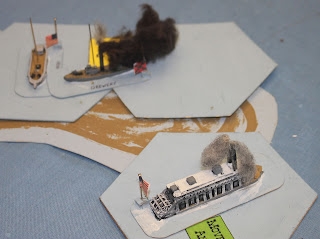 The Dunwich put her fire out, as I was closing on her with the Drewery. Alas for me I got caught in a cross fire from the Signal, and I now caught fire. 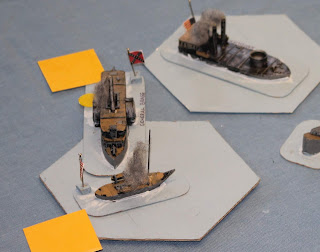 The General Bragg had got a bit mixed up. Because she is a long ship she is difficult to turn, so I ended up ramming one of Gary's tiddlers by mistake. The self inflicted damage knocked out my engines (note yellow counter), so I was stuck there. Luckily for me in the overall picture Gary was rolling poorly to get his extra ships on. 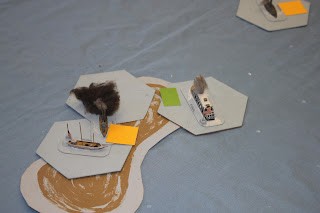 Meanwhile on the sandbank the Drewery was blazing away nicely. Alas that's because she was on fire, not because of her gunnery. 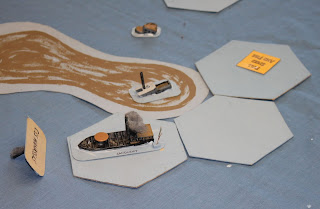 The Manasas had done a lot of damage on the left side of the board, and finished off the Dunwich with a ram. As she backed water she was caught amidships by the Sandusky. She had been reduced to ramming as her gun turret had seized up and her guns were out of action (note brown counter). She turned out to be a better ram ship that monitor, and sunk the Manasas with a straight hit 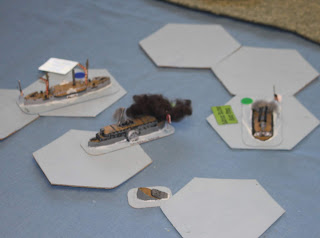 On the other side the late arriving Yankee reinforcements were circling the General Bragg, who was hanging on, and inflicting surprising amounts of damage with her armaments. She has reduced the Cairo to one hex movement (note green counter) and the Sassacus can now only steer to the left (note blue counter). Okay, so she is on fire, but that just makes it all the more heroic.

As Gary's mission was to get 4 ships off my end of the table, and he was reduced now to 3, one of which could only go in circles, I won that one too.

As I said above, I do love this version of HI, and the model ships continue to be a delight. They are lovely little models and just the right size for this type of game. The rules can be a bit random, as young people would say, but that just adds to the fun of it all.

One of my all time favourites.