For the third session in a row Shedquarters hosted a SEG*. This was Chris Kemp's long in the planning, 2nd Alamein anniversary game. Due to size constraints we ended up only playing the Southern sector.

Even so it was a massive game, involving 7 players and an umpire, and a table groaning with units. I was proud to have provided two divisions for the table, made up from my SCW Italians. For this part of the battle the Axis forces were mostly Italians. Chris has given the orbats over on his blog "Not Quite Mechanised". 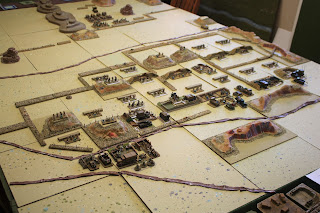 Here's a picture of the Axis defensive position, pre-attack. 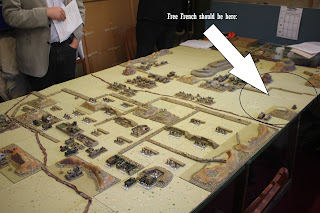 Alas I don't have a similar one of the Allies, as they weren't all on the table when the game started due to the tardiness of one of the figure suppliers. This is the best I can do.

Not all of the players - in fact four out of five - were experienced NQM players. 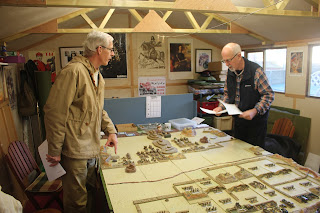 Here's Chris explaining to Gary how the rules that he has downloaded and read might not tie up with what was going to happen on the day. 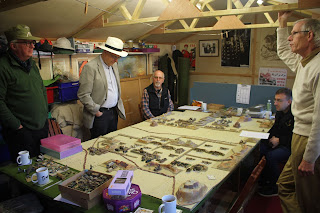 We were lucky to be joined by Commandate von Gow, all the way from Sheffield. He brought hats, Axis air support and mince pies. Other snacks were available as well. 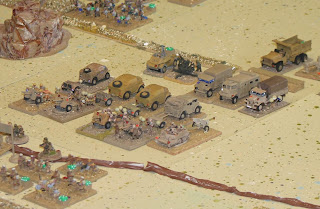 The Allies had a lot of artillery. 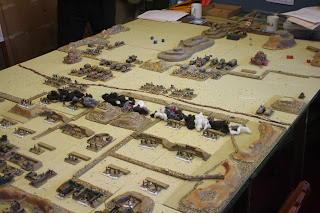 Soon the Axis front line was enveloped in smoke as the opening barrage thundered out. 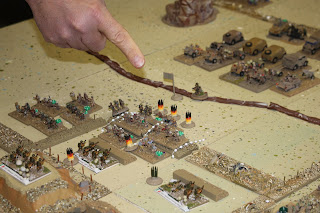 The attack begins. The white markers are lanes cut through the minefields. NB These were only an obstacle to vehicles, - infantry just stormed right through them. 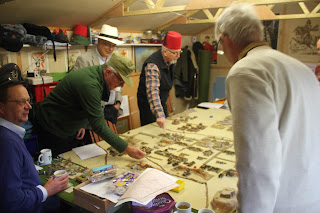 We were soon in need of some serious pointing. 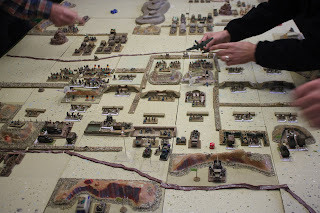 Then the air attacks started. At this stage the Axis forces had aircraft to oppose the bombings, but Chris allowed us single use of all of our models, whilst the Allies were able to recycle theirs. Something about supplies or some such nonsense. 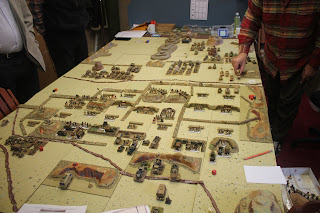 You can now see the combined might of the allied attack, storming towards us. The Free French only attacked during the day, so their officers could skulk off for coffee and Gitanes in the evening in some ersatz pavement cafe. 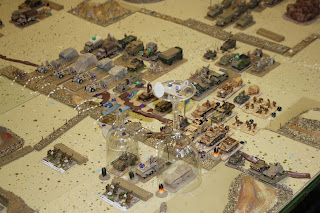 The bombing started in earnest now, as our defensive air power waned. There was a danger I might run out of wine glasses. 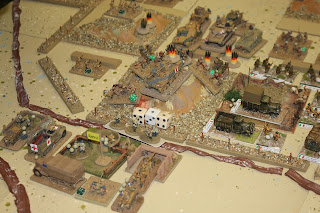 Gary's thrust with 50th Div's armour support made a deep penetration. The ruling that you can get everything in a square that fits is a bit distorted by having steep sided terrain that doubles the ground area. The counter attack by the elite assault engineers is a spectacular failure. You can't call it "Snakes Eyes" with three dice, although there is a reptile called the Tuatara in New Zealand with three eyes. 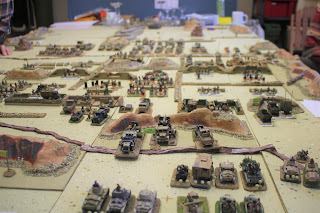 As the allied attack gains in intensity, my Italians fall back steadily, drawing the enemy deep into the defensive position, so I can counter attack with the Ariete armoured division, as soon as they are released by von Gow. 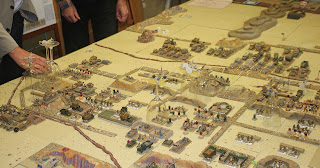 Wave after wave of allied bombers sweep in pounding the desert. 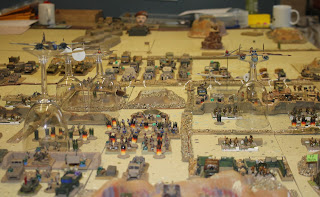 The sand is a sea of bomb flashes. In the distance Monty oversees the attack (hand made bust by Gary). 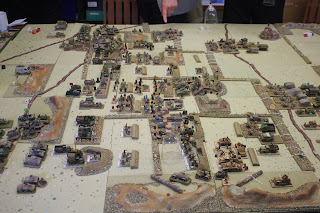 Folgore in the centre have now been virtually obliterated by artillery and bombing. They had so many hits delivered in one turn that there was no way to reorganise to extend their life, as the normal halving of hits when converting to strength point losses would have resulted in them being taken off completely. It was better to leave them there and at least force the allies to close assault, and so delay them by a turn.

A similar fate was being dealt to Pavia in the south, who were being pushed back, despite rarely losing a fire fight. Not to worry, Ariete is waiting in reserve to turn the tide. 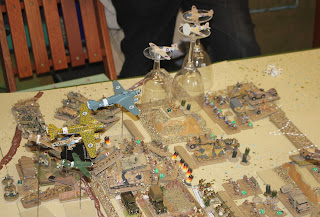 Which is good, as all of our air support was being used in the North of the table, to prevent 50th Div breaking through. 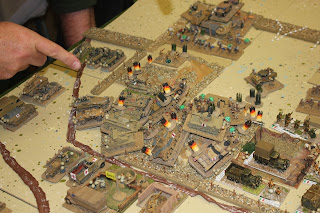 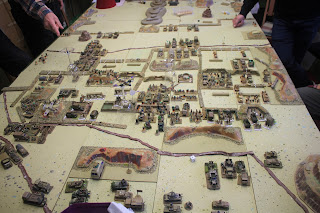 ... and bundled the allies back about 10km (a square is 3km, and there are four small squares to each tile).

However the crisis in the North is deemed so serious, that Ariete is ordered out of reserve in the South, and told to drive North. Oh flippity flip.Time to write battlefield wills and a note to the wife at home if you are in Pavia. Abandoned by your colleagues and pounded from the air, all the French have to do is advance over the bodies. 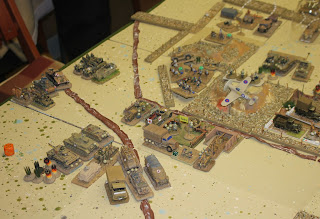 In the North of our sector, British forces who have broken through in the south of the North sector (ie in the bit of the battle we aren't doing) arrive to threaten Commandante von Gow's troops. Hence the panic recall of Ariete.** 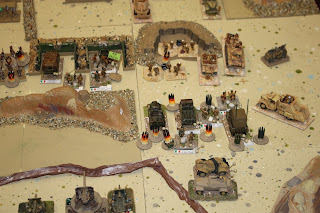 Pavia's HQ is finally surrounded, as the game draws to a close. We played six hours from 10am - 4pm with an half hour break for lunch. At c30 minutes a day we got in everything Chris wanted to do. 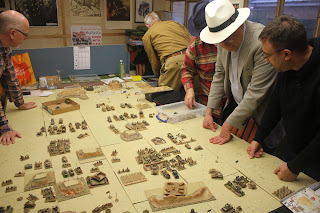 And then it was time for a group effort to put it all away... 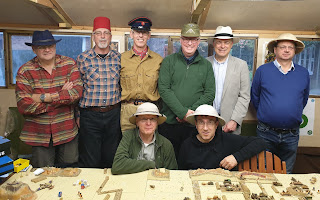 Yes. An excellent way to spend a Saturday in October.

*Someone Else's Game
** I'm being unfair, it was programmed into the game. Apparently.
Posted by Trebian at 11:06