What a busy Tuesday, but can't complain as I spent most of it playing wargames.

I started off by driving up to see Gary in Leicestershire for what I thought was a game of the Decision Games' Fire & Movement module "Golan Heights", only to find that he had been making progress on his boardgame-to-model version of "Fighting Sail". 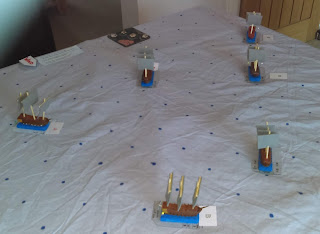 And he has made a lot of progress. The ships are on clear plastic bases with most of the info on them, and he has modified the sails and produced playing aids.

So we set up the scenario which had two Royal Navy ships taking on four Frenchies, and set to it. 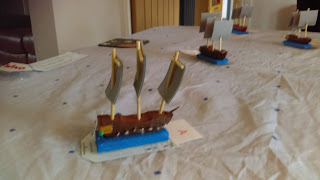 The picture is a bit blurry, but you can see the removable sails and wheel and the first fire marker. 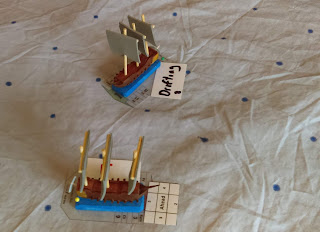 My first broadside from HMS Victorious has shot away the wheel on the Rivoli (yet to be taken off) and she is drifting. Note the see through bases on the ships. Gary has printed on to tracing paper and then laminated them. Clever - probably a trick I shall be using at some point. 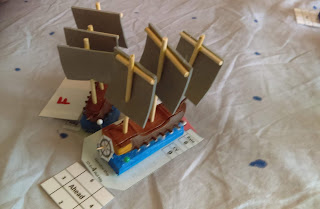 HMS Weasel engages the Mercure up close (this is called "Fouling" in the rules). A point-blank broadside is followed by some boarding action. 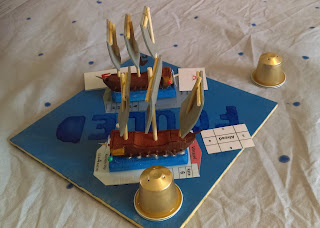 As you can have up to four ship in a square Gary has this neat little square thing you put the ships on, whilst marking the location with a shiny gold used coffee capsule, colour coded to the base.

Of course, being the RN, I completely overwhelmed the cheese eating etc, etc, and took her as a prize. Huzzah!

I don't have any more pictures, but it was a hard fought action where the RN eventually came out on top, as happened historically. The Victorious got amongst the French and did massive amounts of damage, having inflicted an early critical hit on the Rivoli. I was careless with the Weasel, and she took a heavy broadside that did quite a bit of damage. I therefore kept her out of the way, and used her to ensure I had the weather gauge, which is really important in "Fighting Sail".

We learned a bit more from this game, ahead of a big game in November. We're going to make a few rules tweaks, but otherwise the system holds up really well. And the home made ships have real charm.

Back to Shedquarters for the evening's game, which was provided by Phil. Phil has 10mm Romans and Carthaginians based for DBA, which he originally put together to do a refight of Zama. 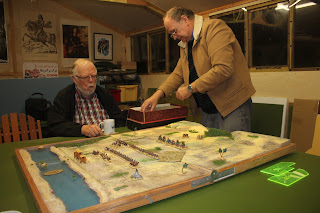 Don't be mislead by the board - this will be Zama although this is the battle field built for Pharsalus. 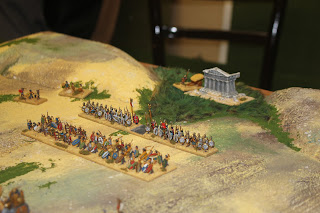 The way Phil did this scenario is that he has two DBA armies for each side, one in front of the other. The first two fight, then when one of them is beaten they are both removed and the other two then fight. You can bring up elements from the rear army to help out, and the winner of the first fight get to carry forward 4 elements to the second fight. This picture is of the Carthaginian rear army. The gap in the centre rear is where Hannibal will eventually appear. 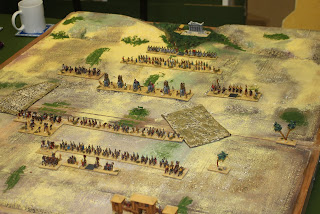 You can see both sides set up now, awaiting their commanders. The Carthaginians have a lot of elephants. The Roman front line is alternating Blades & Psiloi, which will create the lanes for the elephants to run through when combat starts. 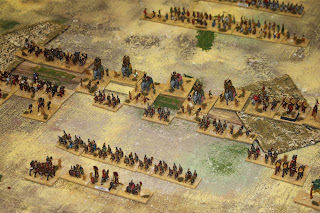 Will had Hannibal's lads, and Richard L shared the Romans with me. Will suffered from low PIP rolls initially, which is even worse with an elephant army. We did a bit better with our PIP rolls, and pulled up a couple of elements from the rear army to stop us being outflanked. We have a particular issue on our left, where we have Light Horse facing Cavalry (this isn't obvious, as Phil has been flexible with the number of figures on the bases) and need to have support and flanking elements to keep in the battle.

We took advantage of a 6 PIP roll to push our Psiloi forward to break up the line of elephants. By starting the combats early and losing most of them, we got driven back, and the elephant follow up makes it much more difficult for the Carthaginians to move their other elephants, as they now need ot be moved individually at 2 PIPs a go. 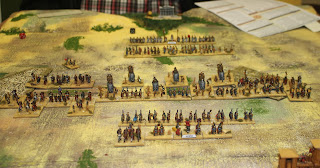 After a couple of turns fighting we've been thoroughly pushed back all along the line but a PIP famine has stopped the two wings from developing properly. 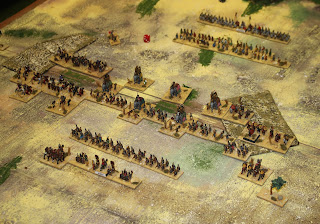 The elephants are still pushing the Psiloi back, and you can see the lanes stating to develop. 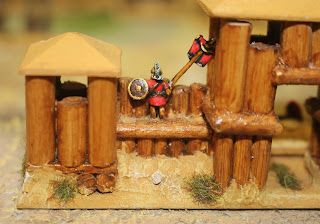 Interlude: One for the Hendrix fans amongst you, from behind the Roman camp. 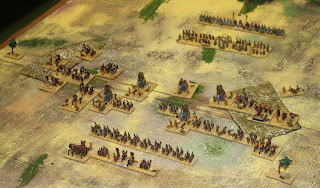 We have struck lucky and succeeded in killing an elephant in the centre. We've also developed our left wing a bit, and have taken a Cavalry element. 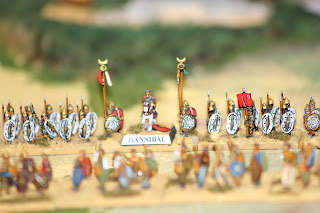 Hannibal, meanwhile, waits at the rear with his Carthaginian veterans. Unphotographed we have a really successful turn and kill three more elements, including one from the rear army... 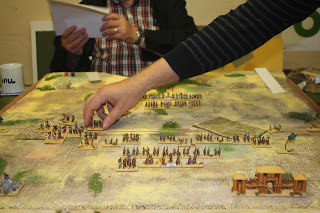 ...leading to phase 1 ending, and the removal of the two starting armies. We choose to hold on to the Light Horse on our left. 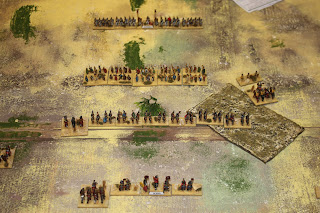 The core of the two armies face up to each other. A PIP shortage means we can only push forward our centre. The Light Horse to the left, just off picture, are stranded. 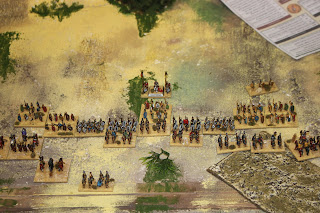 Will has a 6 on the PIPs, and his double depth auxilia part left and right to cover his flanks, whilst the spears advance to fill the gap. However, Will has left one group of auxilia to cover his general.

This slightly non-plussed us, and thwarted our attempt to get round the ends, as we needed more PIPs to move the Light Horse individually. 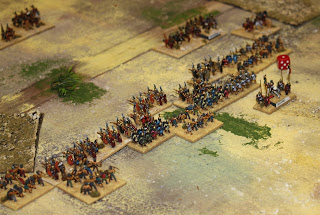 Regardless our brave legionnaries pressed on, driving the Carthaginians back. It was a right royal struggle. The challenge for us was to choose when and where to fight, as we needed to keep the Spears staggered as much as we could to prevent them getting the bonus for flank support. We finally are able to creep our extra units out to the flanks. Having only one PIP dice for 16 elements (12 + the 4 we brought forward from the front army) means the army is unwieldy if you don't keep it in blocks. which I didn't. 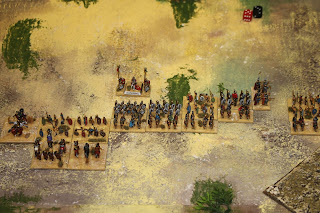 Then, at last, we finally managed to get units on the end of each line, one just inside the right flank. 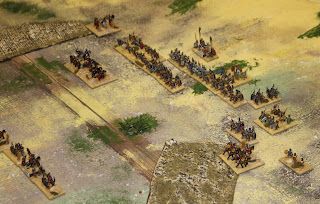 And sure enough we manage to get a couple of kills, so that makes up our four for a win. 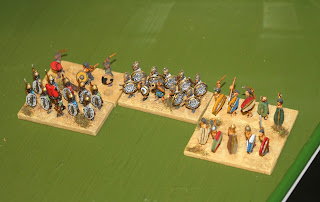 And here's the dead pile as evidence. That's actually 5 elements as the double depth auxilia count as two.

That was the first time Phil had run the game with DBA 3.0, and we had no problems with it. It must be very frustrating using those elephants against the Psiloi, and both sides need an element of luck to prevail. The centre becomes a bit of a meat grinder, but that's typical with Romans. BTW for this game the camps are for decorative purposes only.

It gave us an enjoyable evening, and we thought we'd have another go next week, so check in next week for Pharsalus.