So Pharsalus, So Good

We carried on with the 10mm Romans this week so here is another attempt to describe a DBA 3 game without being too misleading.

This was a refight of Pharsalus put on by Phil, using DBA 3 as the core mechanism, but fiddling around with the army sizes. As with Zama there are two armies on each side. The first set in front fight until one is broken. These are then both removed and the differential in number of destroyed elements is allowed to be carried forward to the second half of the game. Then the other two armies fight to determine who wins the total battle. Although you are allowed to use elements from the rear army in the first phase. 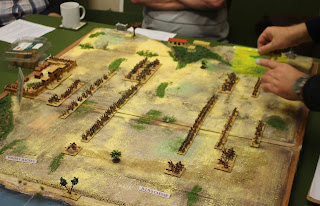 So this is Pharsalus, where Caesar displays his tactical genius to defeat Pompey the Great. Naturally I got to play Caesar. We had six (!) players. Will, Tim & Steve got Pompey, Scipio and Labienus, Richard, Chris K and I got Caesar and Mark Antony. Pompey's army is to the left of the picture, in front of his camp. 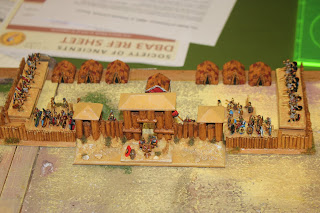 And a very nice camp it is too. 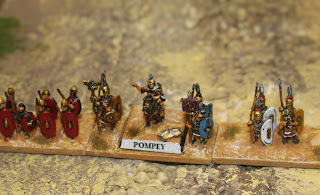 And here is Pompey in front of it... 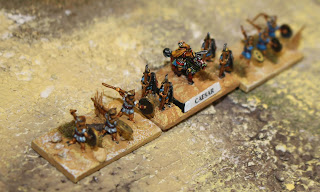 .. and here is Caesar, plotting his brilliant tactics.

In the scenario Caesar's legions are allowed a double move in turn one, to close the gap. As we rolled 1 & 2 for our PIPs we didn't really move at all, except... 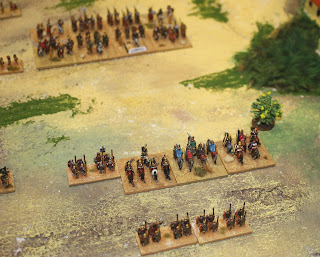 ...like Caesar before us we had a problem on our right wing, where we our mounted arm was heavily outnumbered by Pompey's cavalry. We brought up some legionaries from the main army to extend our frontage, to stop the overlap advantage. 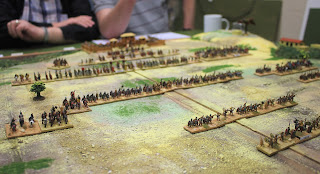 And we were in danger of being flanked on our left as well, so we brought up some reserve cavalry to help out Mark Antony. 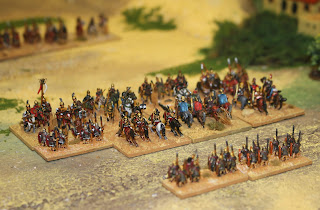 The Pompeians* charged our right flank. They killed our extreme right cavalry unit and drove everything else back. It was not a good round of combat for us. 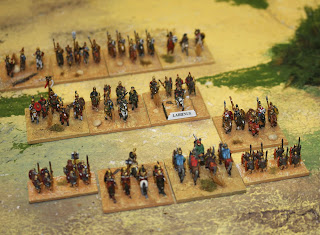 We had to bring up more legionaries to bolster the wing. 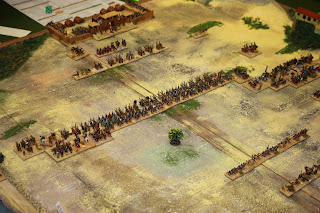 The main lines then clashed, and there was little we could do to stop being overlapped by some of Pompey's reserve cavalry on our left, and completely flanked by some elite cavalry, masquerading as Knights on our right. Luckily the opponents to our front here are some foot bow. 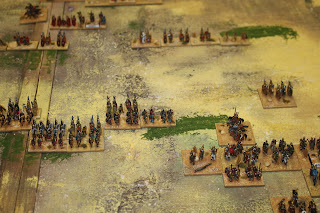 But just when it looks really bleak, DBA throws up one of those freak results and our legionaries on the right of our centre line destroy the bowmen, and bounce the cavalry.  Elsewhere on this wing we hold on by virtue of a rule that says that as we are veteran legionaries, Pompey's men have to kill us twice to remove us from the board. 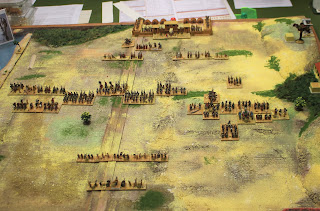 We got fairly comprehensively bounced on the left, but the fights in the middle were more mixed, and we have broken up Pompey's line, making it hard for him to make his extra numbers count as he won't have enough PIPs to go round. Hopefully.. 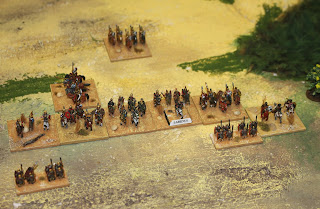 Then we have a nightmare turn on our right, and not only lose but are doubled in three out of four combats. Our front army is teetering on the point of breaking. Can Caesar pull something out of the bag? 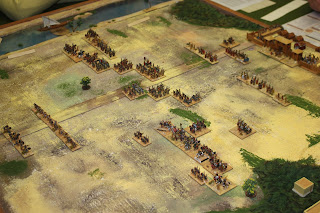 Well, yes he can. The destruction of the bowmen mentioned above enabled us to gamble on flanking the end legionary unit opposite us, despite exposing the rear of the flanking element to a potential attack next turn. Not a problem if we win this turn, which we do, enabling us to start to roll up the line 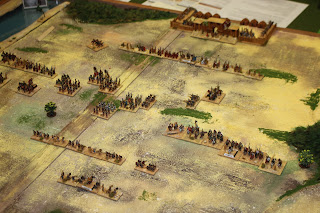 Pompey is held up by a PIP famine, in his turn (although he finishes off most of our right wing), but a death or glory charge into the "Knights" results in a tied outcome, which quick kills them when fighting blades (yes, - an apparently odd rule, but one based on probabilities). 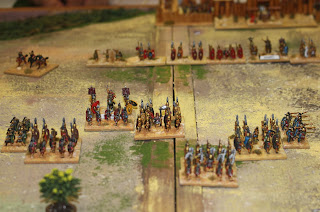 The centre is still swaying backwards and forwards, we get another kill, but so does Pompey. 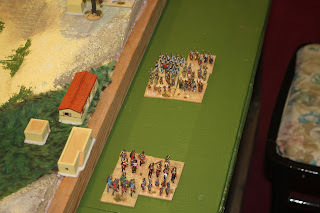 Both front armies are now at their break point, so next kill wins this stage. 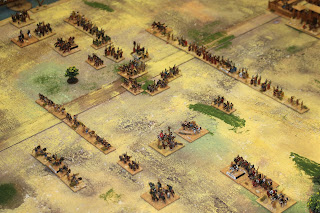 Which is us, as we trash Pompey's centre, and drive back his cavalry wing on our left. Take that, Scipio. Not so hot as your great-great-great-whatever granddad are you? 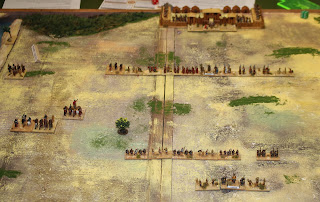 So the remnants of the frontal armies are removed, but we get to bring forward an element. We choose Mark Antony and his cavalry over on our left. The main worry for us, however, is that we've already lost two elements from the army that is now about to fight, with a 5 element break point. 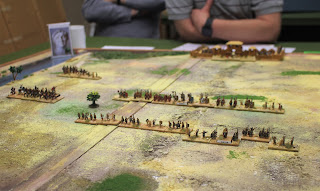 Pompey's men start off this phase of the battle, and try to rush our line before it is fully formed. 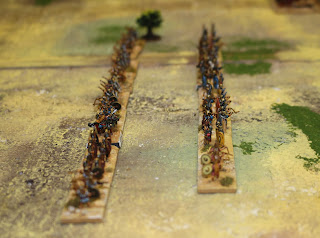 To late! We got everyone in line...shame some of them are psiloi. Still, they are Caesar's psiloi, so clearly going to be super. 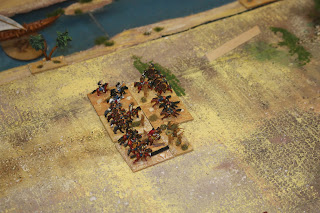 Out on the left wing we risk a one on one encounter... 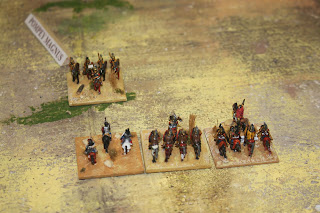 Chris K was ON FIRE for this round of combat, winning all of them, and killing two bases in the process. IN YOUR FACE, POMPEY THE SO CALLED GREAT!!! 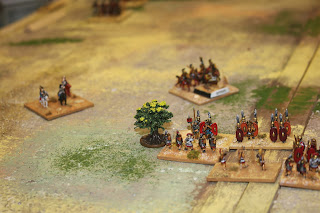 This freed up Mark Antony and our light horse to threaten the enemy's rear. 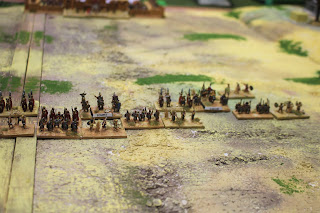 Everyone is stuck in now as the battle heads for its climax. That's a slightly fuzzy Caesar out there on the right, in the thick of the action. 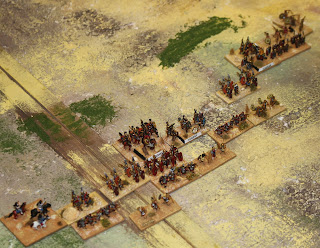 Mark Antony delivers on the charge to the rear, and his light horse head into the end of their line. Victory is within our grasp. 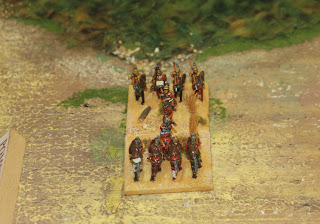 We even have their cavalry pinned up against a marsh 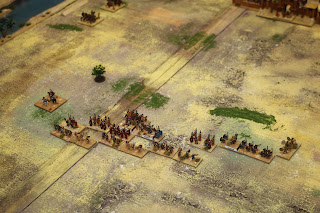 Okay, so it doesn't all go to plan, and we get bounced pretty much everywhere. Curses. 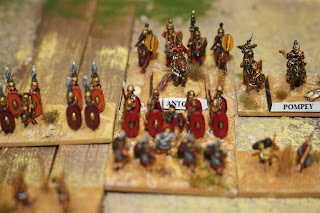 Not to worry, - the next turn pays for us, and we run out winners by a margin of two or three elements.

A thoroughly enjoyable scenario that kept us occupied for longer than it should have done, mainly due to the convivial atmosphere and the good-natured joshing between the players that did not try the umpire's patience one jot. Honest.

A super scenario and game, that worked really well. Excellent work from Phil.

And I'm not at all biased because we won.

* That is, followers of Pompey, not people from Pompei.
Posted by Trebian at 13:38