Back in April we did a re-fight of the Civil War battle of St Fagan's (pronounced Fag-Annes, I was told last night, not Fay-Gan, as I usually say it), using a set of rules written by someone several of us know through WD.

The game was a mixed success, and resulted in me writing a fairly detailed critique of what we didn't like for the pages of WD's "Nugget".

Undaunted, Mike Elliott was back for some more, and sent me a re-written version, taking into account our criticisms, and asking if we'd care to give it another go as he's short of playtesters. As I'm not currently working on anything I thought it might do for a Tuesday evening.

The rules are intended for smaller refights, - say up to 5-6,000 a side tops. A flick through my bookshelf came up with the Battle of Braddock Down, 19th January 1643. This was a thorough victory for Sir Ralph Hopton & Sir Bevil Grenville's Cornishmen over the Parliamentarian forces under General Ruthven. By all accounts it was a fairly one-sided affair, but you never know with these things.

The Parliamentarians amounted to about 1,000 horse and 3,000 foot, so on a scale of 1 base = 100 men, that gave me four cavalry regiments, and five foot. The Royalists have about 500 horse and 4,500 foot, so I went for two cavalry regiments and eight foot. I gave both sides a Galloper gun. The Parliamentarian forces are mostly raw, the Royalists have some average horse, four veteran Cornish foot regiments (the front rank with flags in the pictures) and four raw militia units. 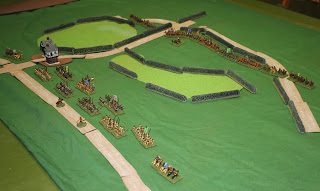 The site of the battle is disputed, but we know both armies formed up on hill crests with some scrubby land between them, signified by the light green areas surrounded by hedges. Any units in there move at half speed and count as being in cover when fired at.

We had quite a turnout. Steve made it, as did Richard and another newbie Tim. Phil then turned up, as did Chris A. Steve & Tim got Parliament, to be joined later by Chris. Richard took the Royalists, and was helped by Phil later on. 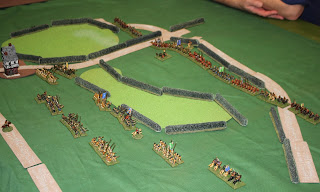 Historically the battle started with a lot of desultory musketry exchanges, until Hopton decided enough was enough, reformed his army, and ordered Grenville to lead an attack. That's where this game started. True to form, the Royalist commanders surged down the hill, although instead of going straight for it, Richard contemplated forming up in column and forcing the hedged road.

One of our major criticisms of the previous iteration of the rules was that the movement distances were too long. Mike has addressed this, but they're still quite quick. 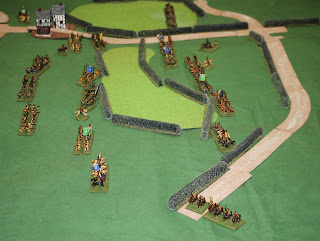 Rater than try to hold the crest line the Parliamentarians decided to get down in the dip, too, whilst trying to turn the Royalist flank with their cavalry. Phil moved his only cavalry unit out to cover the flank, then started to drive off the other horse with steady volleys from his infantry. In the distance the two opposing cavalry wings made their way towards each other. In the centre musket fire has been exchanged, but the first melee has already formed. 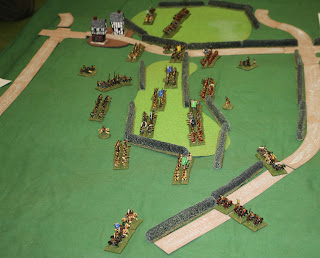 The Royalists prevailed, and drove back the enthusiastic Parliamentarians. 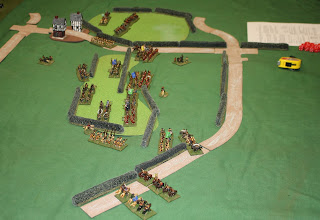 They then followed up to engage them once more. Near the camera, the opposing horse is finally lined up for some combat, whilst the foot still are able to drive the horse back, the difficult terrain making it hard for them to get out of the way. Up top, a regiment of Royalist militia is able to enfilade the Parliamentarian horse. 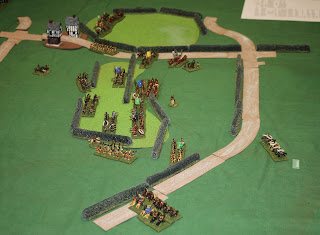 The cavalry is now properly engaged on both flanks, and the firefight has started up in the middle. 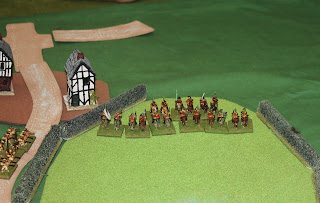 To everyone's surprise, the Parliamentarian horse win a round of combat, and drive their opponents back 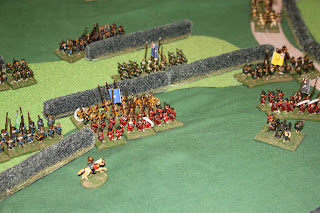 It's getting a bit feisty in the middle too. 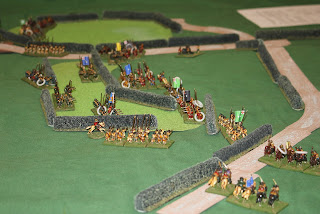 The Royalists are generally prevailing everywhere, driving the Parliamentarians back to their starting positions. 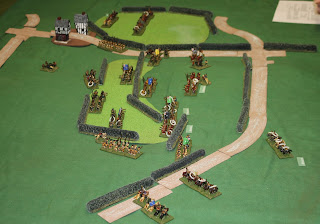 Units are starting to degrade quickly now, and many of them are Shaken, indicated by the markers behind the units. The intensity of the fighting is preventing units rallying off their damage. 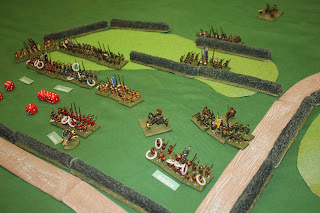 The forces of Parliament are starting to suffer disproportionately. Things are definitely looking bleak. 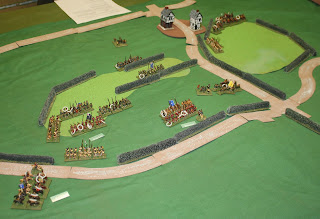 One Parliamentarian unit in the middle has broken and been removed. The Royalists are now circling, obtaining local numerical superiority. 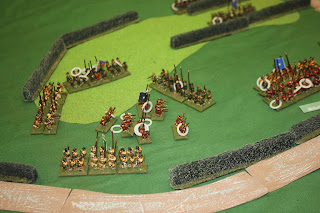 This finally pays off, and another unit is broken... 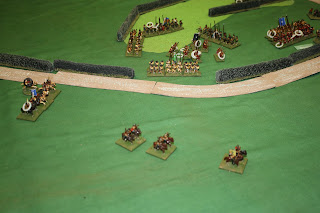 That was enough to break the army. Game over.

So we got the same result as history but in a slightly different way. Again it was proved that Veteran Foot are the key, and will cause lots of problems. We discussed how the Parliamentarians were expected to win. Well, it looks like they didn't have much of a chance, really, so you need to judge them on how they did compared to their historical predecessors. Unlike the forces under Ruthven at the time, they surrendered the crest and counter attacked, inflicting more damage. The actual battle featured a simultaneous assault on the Parliamentarian foot line on the crest by the Cornishmen, which was all over in minutes, the Parliamentarians fleeing after firing one round. I suspect that more scenario specific rules are required to achieve this.

Still it passed the time.