A Shed Load of Arguments

As we are regularly having a big turn out at Shedquarters, I thought it would be good to take the opportunity to playtest a multi-player matrix game (if you don't know what this means there's a brief bit on this blog I wrote a few years back). The scenario, - the Battle of Hydaspes - is intended for 6 players, which we've had quite a lot recently. As it was we had four players, which is enough, but the evidence from the game was that 6 would have been better. (BTW It seems as if someone has stolen bits of my memory as I've run this game before: see this blog). 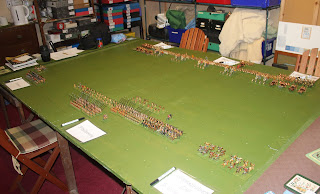 The set up was based upon "Lost Battles" and the excellent articles written for "Slingshot" when Hydaspes was chosen as the battle day a year or so back by the Society of Ancients, together with the battle pack that Richard Lockwood wrote.

Of the four players one was an old hand at matrix games (Phil), one was an experienced wargamer who had never heard of them (Richard) and two were neither of the above (Tim & Steve). I explained the principals to the newbies and went over some basic argument structures. They all looked bemused. 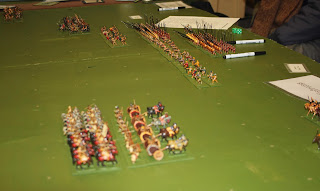 Phil played Alexander, and did a successful argument in the first turn to show how it worked (something about light horse evading charges). The other three looked on and confessed to be baffled. Richard, - not for the first time - put his head in his hands and said he didn't know what to do. Richard is one of our most thoughtful players and is always very conscious of the rules in a game. Effectively being invited to write his own sort of threw him a bit. Steve took up the challenge and argued successfully for faster move distances for his "equine units", although why he wanted this I wasn't sure. 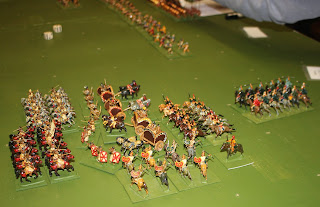 Every so often you come across someone who is a natural, and finds it all liberating, despite protestations to the contrary. Tim could see how the mechanism would help him, and worked his way into getting a bonus for a flank attack. He then argued successfully for the target unit to break and flee. 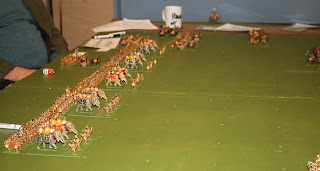 The centre, without a commander player caused me a problem, but I resolved it by creating a third pseudo-player on either side. 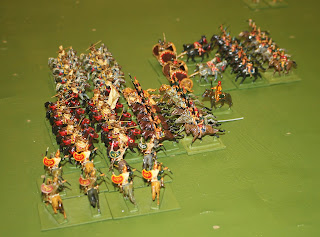 As he'd had a s successful first round, Tim started the next with the initiative. As you only inflict hits  in your turn having the initiative is a big deal. He manoeuvred into another flank attack, although slightly less successful this time. 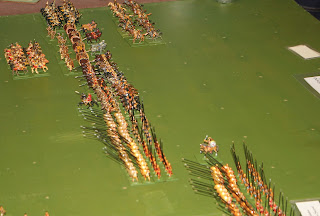 Richard went for an argument about the cavalry never having seen elephants before. This failed mainly because it wasn't true (Alexander had been in contact with other Indian rulers, and already had  elephants in his army). In the distance you can see Phil's light horse evading Richard's chariots. 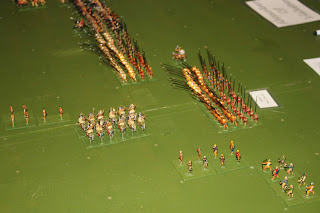 The Macedonian light infantry was doing quite a good job on the Indian elephants, so Steve charged a unit of cavalry down the middle to clear them. 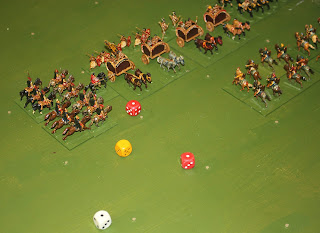 Meanwhile Alexander lead a flank charge with his Companions and got a resounding four "1s". This lead to an argument that Alexander had been killed, but he only ended up wounded. 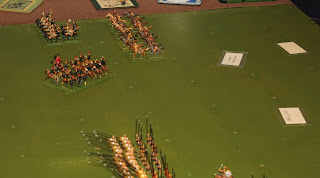 This shamed his Companions into becoming a killing machine. 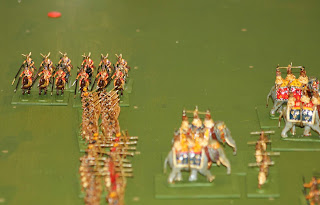 Which opened the door to a breakthrough move by more Macedonian heavy cavalry. 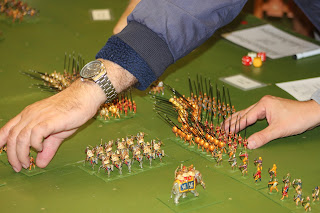 The phalanx advanced to force the Indian cavalry to retreat. 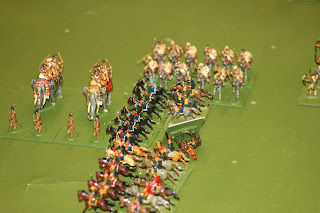 Thy duly turned and charged into Tim's flank, and resulted in his character, Koinos, being killed.

By this point the Indian left had collapsed, and Alexander was about to roll it up so we went into the end of game sequence, where each player argued why they won.

Phil won, partly because he was Alexander and survived a battlefield injury, but also partly because he rolled good dice. Honourable mention to Richard who was still expressing bafflement at the end, but submitted a brilliant argument based upon reincarnation and the fact that there were more Indians to hear stories of his bravery than Macedonians and Greeks.

We had a interesting post game discussion, and everyone said they enjoyed it (very polite players I've got) whilst making points about how hard it is to get into the swing of it all. I find this a bit odd, as it all makes complete sense to me, and has done from when I first started playing this type of game nearly 20 years ago. I like how it frees the imagination and creates a narrative for the game. I'm still surprised at how this is all news to experienced wargamers.

That's why this game is going to the Society of Ancients conference this year.