Last week's suggestion that I had got all of my stupid Armati moves out of my system might have been premature.

In line with my policy of using newly painted figures where I can, I put out Republican Romans with Italian allies - recently increased in number -  and north Italian Celts, with my new Gaesati.

There are issues with both of the army lists. The Republican Roman list doesn't let you choose enough allies, and the only list with Gaesati in them is the Galatians. So I doubled the amount of allies on the Roman list and used the Galatian list, but with Celts. 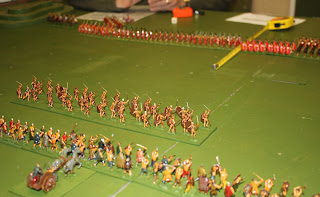 Will took the Romans, (no surprise there) helped by Phil, and Steve and I took the Celts. My plan was to use the Gaesati to soften up some part of the Roman/Italian line as they are non-key units then hit them with the main warbands. Hopefully impetus will break a few weakened or fatigued Roman units, whilst our predominance in the mounted arm will pay dividends on both wings. 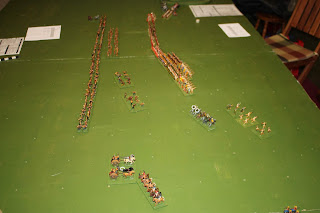 Armati can move very quickly. On our right wing this is two turns in. Our combined cavalry/chariot division has clipped the Italian cavalry at the bottom of the photograph, and then split, with the cavalry trying to ride down the skirmishers. The skirmishers hit the cavalry twice from three shots, which was a bit lucky. The cavalry hit the end of the Italian infantry line, which had just finished a triple wheel, and so was disordered. They then outscored the infantry and broke them, as they had impetus. 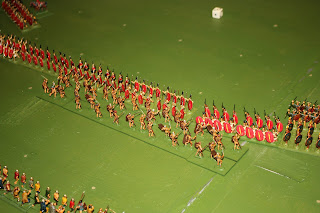 The Gaesati crashed home with an obligatory charge. I wasn't expecting much, - they are giving away a +2 advantage to the Italians and +3 to the Romans - but we were not helped by rolling 1s & 2s, and the Romans and friends rolling 5s and 6s. 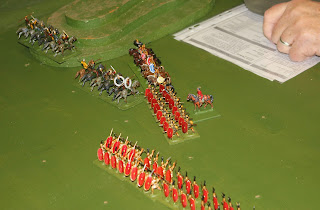 I forgot that the Triarii could wheel and move. Not so Will, and he soon had an advantage over our cavalry out on the left. Again, not helped by rolling very poor dice. 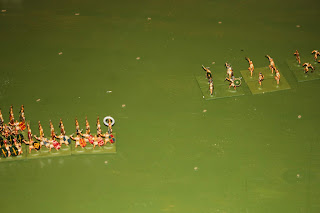 Having broken the end unit with a cavalry charge, we were unable to exploit our advantage as the unit was killed by another hit from the skirmishers. That was three hits out of five shots, which is really quite rare (they have a 28% chance of inflicting a hit, so from 5 shots we should have taken 1 or may be 2 hits). 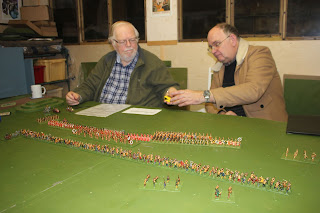 Next turn we evaded our skirmishers back through our warbands to stop them being overrun when we charged. I also wanted to get them out to the right to shoot up Phil's cavalry, should it defeat our chariots (which they did). 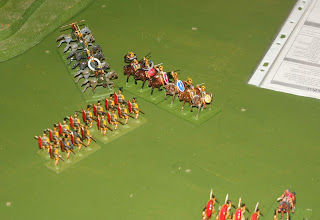 Out on our left we were about to lose another cavalry unit, without inflicting a single hit. With even odds you'd expect to inflict at least once, surely? 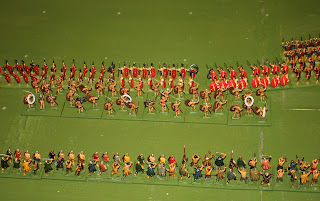 In the centre the Gaesati are holding on, just but aren't inflicting any hits. 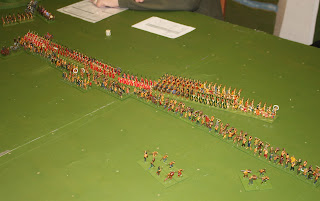 We are now close enough for some of units to charge in, as we can step forwards some of them so keeping in contact as a division. NB Mistake made here. Our General should not be on the end of the line, facing the Roman general, but one unit inside that. 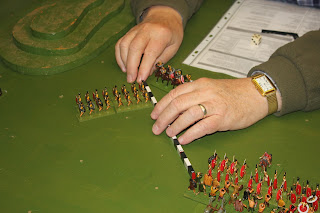 Having killed our cavalry, Will is now lining up his Triarii to take the flank of our line. So much for Triarii being the reserve unit you hold back as a last resort. 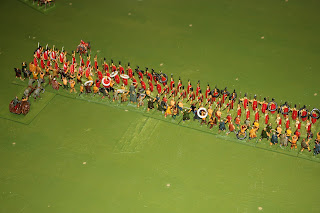 The lines clash, and it isn't looking good. We have four or five combats here and we should be able to outscore in one of them, so breaking a unit with impetus. As Will rolled 5s and 6s all along the line, the fact we rolled 1s, 2s and 3s was irrelevant. As I said above, the General was in the wrong place. we should have moved him more centrally, increasing our chances of breaking through at the cost of the end unit loss over four turns. 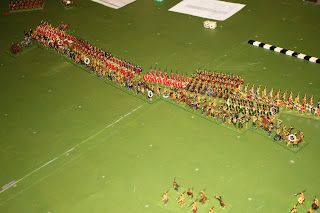 Similarly spectacular failures on the right, when we finally got to grips. We should have been in with more of a chance here, only giving away 1 on the die roll, but all to no avail. 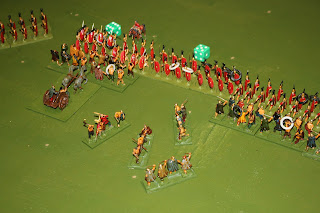 Then it was all over, with another cataclysmic set of die rolling failures. Well, successes on Will's part. No point in rolling against those numbers, and our last key unit breaks and the game is over.

I do love Armati, but there are issues with some of the army lists. I was involved in their development many years ago, and many, many long arguments were had. The Romans are really hard to beat, and the Celtic armies have very little in the locker to fight them with. It isn't just the disparity in the troop quality, it is things like the Romans having Triarii who can wheel and move. All the Celts can do is buy more warbands until there is no room left to deploy them. One of the fixes for that, - which was my idea - was to allow them to deploy core warbands in the flank zones. Alternatively you have to buy as much terrain as possible and hope the Romans choose to fight you in it, - although you only get a slight benefit, compared to what the Romans get in the open, and you lose the charge impetus bonus.

Enough moaning. Someone else is putting the game on next week.
Posted by Trebian at 11:54