After last week's player shortage we had a much bigger turnout for the pre-Christmas fun. In the end there were eight of us, - Richard, Tim, Chris K, Phil, Will, Steve, Dave the new boy and me. Probably a record for Shedquarters. Good job I bought the big box of mince pies. 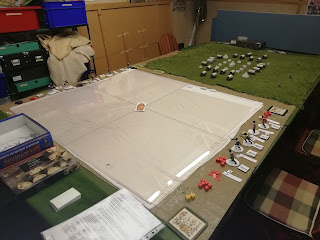 Following on from my recent nostalgia post about all the games I've ever designed I thought I'd give a couple of the more light-hearted a run out. First up was "Warriors on Ice" a game from 1997 based upon the frozen pond fighting sequence in the second of the Dick Lester Musketeer movies. 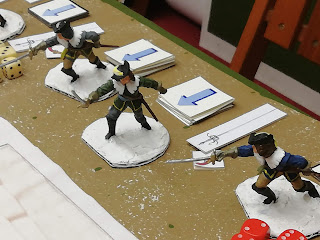 The game uses big plastic figures, kindly donated to me by Ian RL, who used to be a group regular before he retired to the West Country. I can't remember where the bases came from, but they seemed to work well for showing the direction a figure was moving in. In addition to the figure, each player gets a rapier and pistol and two sets of movement arrows. 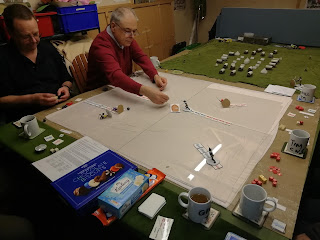 We had the Musketeers and Cardinal's men both trying to retrieve a secret package from a rowing boat frozen into the middle of a river. Here you can see Richard and Steve being quite thoughtful about where they are going (in Richard's case) or what to do now he has fallen over in Steve's. Phil, has also fallen over on the left, as has Will in the top right. Will has also knocked himself unconscious for 6 turns. Tim has "sprinted" towards the boat, and Dave has moved more tentatively. The red and blue arrows are so I can tell if a player has speeded up or slowed down. 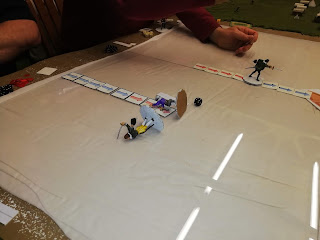 Richard has made a direct line for the boat and gets there this turn. 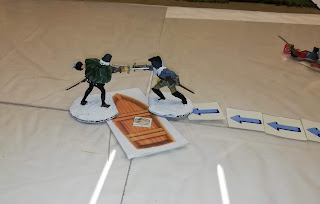 He and Tim are soon fencing across the boat. 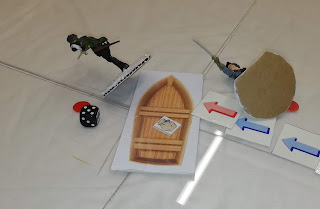 They succeed in both falling over having stabbed one another. 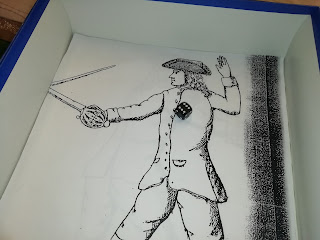 A quick close up of the combat system. You roll a number of dice into a box lid. The number gives severity, and where the dice fall on the target, location. I think Phil just shot Tim in the chest and killed him. 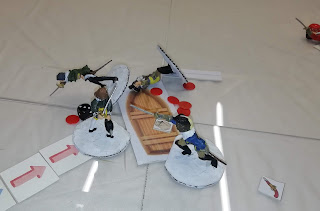 There sure is a lot of blood. Dave and Phil have now got to the boat, Dave dropping his pistol on the way.Lucky for him it didn't go off. 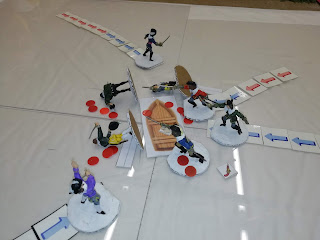 Soon everyone had converged on the rowing boat, and the corpses were mounting up. This surprised me a bit, as my recollection was that the combat system mostly resulted in everyone missing all of the time. 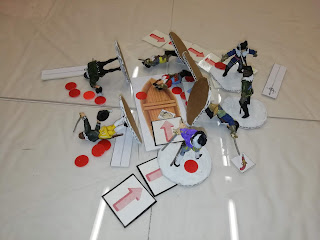 Several people tried to climb in the boat to search for the package. This was often a fatal move. 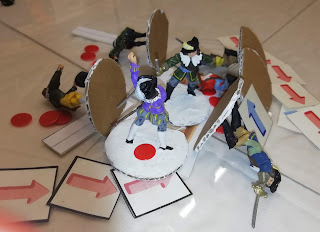 Although we did end up with a climactic duel in the boat. I don't recall who won, but someone did, and everyone announced themselves well satisfied.

For a game that had sat in its box since Tony Blair was first Prime Minister it played okay. I spotted a couple of things that could be improved, - there was a design issue in the original version that I knew I had but couldn't fix. Clearly I only had to wait until I grew up a bit to work out how to fix it. 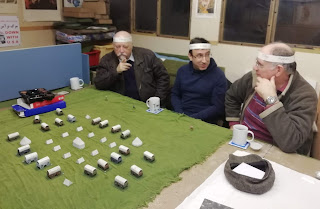 The second game of the evening was one of my old favourites, - "Looting the Baggage". 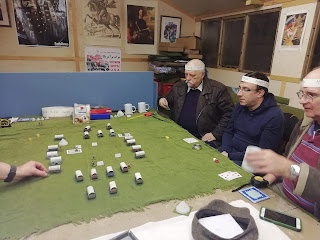 This game, which involves a group of Landsknechts in post-battle action, has a drunkenness mechanism that uses headbands. If you look closely you'll see everyone has their level of sobriety on their forehead. 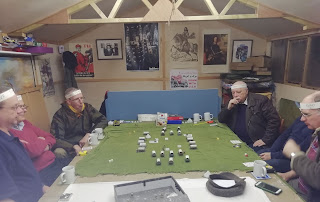 This is a confusing game as people riffle through tents and wagons (whoops, - got the latter rule slightly wrong) drawing playing cards that represent loot, booze and baggage train guards. As players rush around the chance of dropping loot and getting drunk or hurt increases. 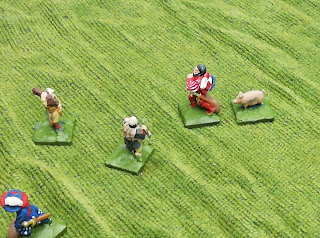 There's also the odd random event. Phil got chased by a pig. It was hilarious, I can tell you. 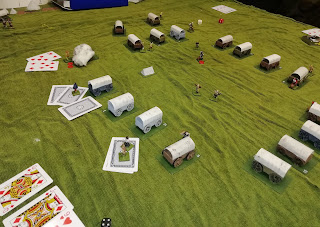 I ended the game when Chris succeeded in blowing himself up rooting through the ammunition wagon (top left). I had to do this as I had forgotten how the game was supposed to end. That's the thing with simple one side of A4 rules you write 25 years or more ago. You quite clearly leave things out in the interests of brevity and then forget them. Anyway, Richard won with an incredible 79 points. The other players didn't do nearly as well, - Phil was the closest with c50 points, which was well done as he kept dropping stuff.

Well, I think that's it for the year. Next Tuesday is Christmas Day, and the Tuesday after that New Year's Day so I reckon everyone will be busy. I may try to squeeze a day game in if people are about.

On reflection it has been a pretty good year in Shedquarters. The annual rules development cycle gave me "Va t'en guerre" which I'm quite pleased with, and we did some other games which were different. The group of regulars has expanded quite dramatically, making for an even more convivial atmosphere.

Email ThisBlogThis!Share to TwitterShare to FacebookShare to Pinterest
Labels: Looting the Baggage, Warriors on Ice