A Visit to the Holy Land or Snake Eyes for Saladin

Just in time for Christmas it was time for a Pilgrimage to Jerusalem. For our monthly boardgame outing Gary & I went for "The Crusades", from a 1978 S&T.

As there's only the two of us we played the Third Crusade.

I think everyone who really loves this game has fond memories of the multi-player variant. Both games have some interesting design ideas, - the smaller squares within hexes representing towns and castles - the importance of Generalship and the different tactics it produces to determine combat outcomes. The reduced counter mix forced on it by being in the magazine means there's a slightly inelegant army roster list for the Crusaders, which means pen and ink record keeping, as does the requirement to write orders each turn for simultaneous movement. 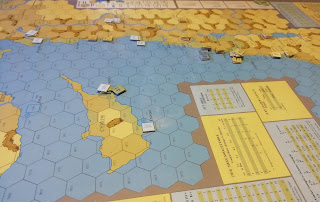 I was the Crusaders. First job is to get Richard there safely, which isn't straight forwards, due to the naval rules. There's something odd about turns that last two weeks+ that require fleets to be in ports at the end of the turn. If a turn is so long, then why do specific timings and locations become important when a fleet could have been at see for a week or more already? Anyhow, part of the consequence of this rule is that it's best for Richard to stop off in Cyprus and conquer it, as he did historically. Well, you get victory points too, so the delay isn't all bad. It was a good opportunity for practising beach landings too. 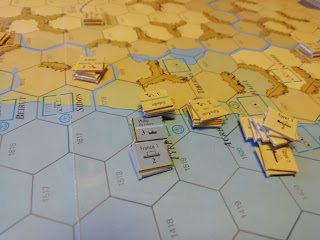 While this was going on I abandoned the siege of Acre as Saladin was heading my way with lots of troops. I holed everyone up in Tyre. This proved to be a magnet for the Saracens, who massed a large army and went to be-siege it. 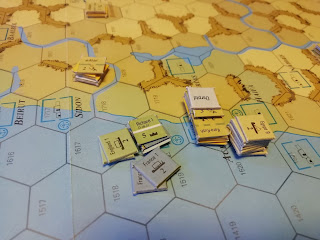 They were thwarted by a beach assault by Richard and the English, combining with a load of other forces, or something like that. I bounced Saladin all the way back to Acre.

I didn't take many other pictures, - after all it's just a load of cardboard counters - but this is a frustrating game and there are a lot of nit-picky rules around movement and where you can and can't go.

Trying to capture Jerusalem, the main aim of the Crusaders, is quite awkward due to the restrictions on moving through desert hexes and the associated attrition. You need to get down the coast to Caesarea and Arsuf, then secure Ramleh as a forward staging post. Using the fleets to re-position my armies I trailed my coat from Caesarea to Arsuf as Richard had before me, and failed to get the Saracens to attack. Richard is the key man, as he can get serious column shifts in the Crusader's favour, turning fighting at a 1:2 disadvantage to 2:1 by using a better formation and superior tactics. The Saracens refused to bite.

As I couldn't get to Jerusalem I took most of my forces, less some garrisons, further down the coast, and then sailed to Egypt and captured Cairo. Gary took the opportunity to re-assemble his forces and return to attack Tyre whilst I was away. What he hadn't realised was that I had worked out I could respond with a lot of forces from different locations through the use of my various naval fleets. Just as he was readying a siege assault, King Richard came down like a wolf on the fold, with most of the Crusader forces, and trapped him against King Guy's men sallying out from the city. It was so brilliantly constructed as a sort of ambush I didn't even miss King Phillip of France and his men taking the hump and heading home as a random event (note: if you ever play this game, be sure to use Philip as the spearhead of all of your attacks and take the hits from his forces, so that when he goes home all his people are dead any way). 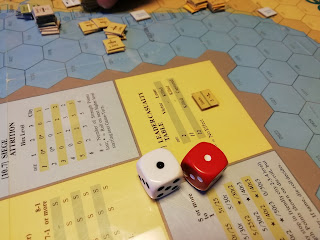 Anyway, back to the famous Battle of Tyre Beach. Lead brilliantly by England's King Richard we stormed up the beaches, out manoeuvred the Saracens and sent them off with massive losses. This included the death of a leader, - who turned out to be Saladin.

That rather knocked the wind out of Gary's sails as the first year of the game came to an end. I was clinging on to significant parts of the coast as well as all the important bits of Egypt. I was struggling to see how I would make any progress the next year, as I'd taken some losses - not as many as the Saracens - but they are definitely a finite resource as far as the Crusaders are concerned. I had pretty much come to the conclusion that I'd give up on Jerusalem and look for other victory points, whilst tempting the Saracens out to areas where I could fight them and inflict serious losses.

We were running out of time by this point, as well as enthusiasm for the game. As I said, its reputation is based on the First Crusade scenario. In order to play this scenario better I'd need to sit down with the map counters and charts (which I don't have) and really work at what should go where and when, and think about the order in which places are attacked. A lightening strike on Jerusalem via an overwhelming attack on Caesarea or Arsuf might be viable. Use of the fertile coastal plain keeps the Crusaders alive, and enables rapid strategic movement with the fleets. As for the Saracens I think the waiting game is the way to go, with also an attempt to cut the Crusaders off from supplies through the use of Naval  Blockades, especially as their ships all go home for the winter.

We stopped at the end of year one as it turned out we had to pack up early due to an unexpected domestic emergency, but neither of us was that disappointed.

Email ThisBlogThis!Share to TwitterShare to FacebookShare to Pinterest
Labels: SPI, The Crusades