Can we do the Sudan (again)

What shall we do? The monthly question that arises between my boardgaming chum, Gary and me. I offered him the "Ebro 1938" second scenario. He asked for more figure gaming in the Sudan. I said how about Hicks Pasha. He said okay. 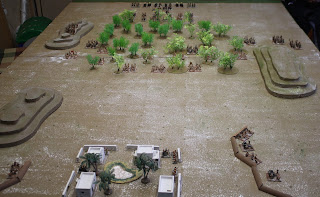 I mashed up Hicks Pasha's last campaign a bit. I gave him a town to advance to and relieve at one end of the table and then filled the space with sparse trees and an open plain (I ran out of trees) 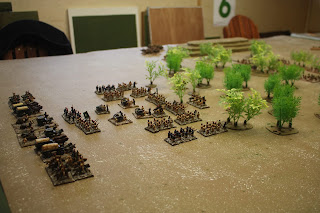 I don't have any Circassian Cuirassiers, nor do I have a lot of civilians to mill about, but I put together a pretty good approximation of Hicks' column. I then scattered Mahdists liberally amongst the trees, -although they were still outnumbered. 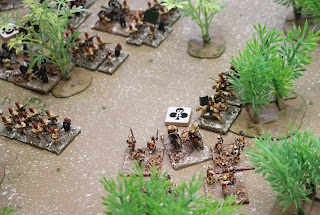 The trees made it all jolly confusing. So much so, in fact, that I forgot completely about the Egyptian panic rule, which should see a goodly number making for the hills as soon as I move adjacent to them. Consequently the Egyptian horse put in a fine performance, much to everyone's surprise. 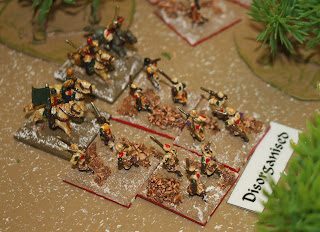 They even charged some Mahdist foot. 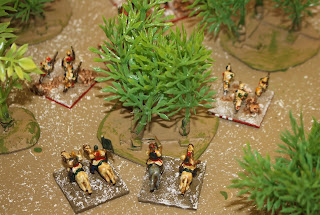 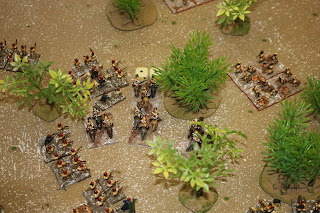 An attempt to do something similar with Ansar cavalry resulted in disaster. 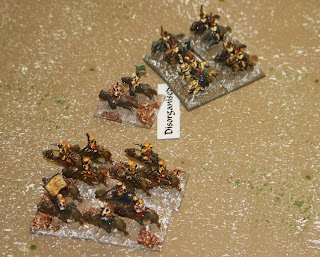 The Egyptian cavalry also made quick work of my flanking troops, trying to get round to take out the baggage. 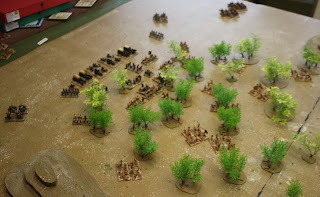 By now the Egyptians were hanging on to the edge of the wooded area, as Mahdists crept towards them. Gary is pushing units out left and right, regardless of what brigade they were in, which caused us problems later on. 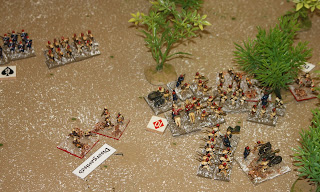 I did finally succeed in surrounding and killing that pesky cavalry in the forest, and then broke through the line, routing an infantry battalion. I did get a bit shot up for my pains. 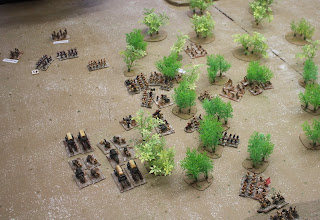 Gary's neat formation is breaking apart, but he is able to see off the Ansar as he advances. He is moving his baggage away from the flanking cavalry at the top to prevent me surprising them. 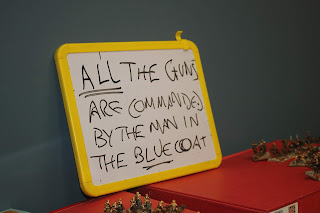 As I said, some of the brigades were getting a bit mixed up, and Gary was struggling to remember who was in charge of what. 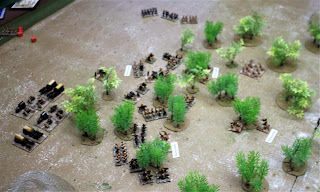 In the end I lost one unit too many, and the rest of my brave fellows melted away, leaving Gary to march to his destination unmolested.

We had some tense moments, but it should have been closer. I should have put a turn restriction on the relief of the town to force Gary to move into the scrub. As it was he sat there, mostly, and let me come to him. And forgetting the "Egyptian Panic" rule didn't help.

Next time, perhaps, next time.

Email ThisBlogThis!Share to TwitterShare to FacebookShare to Pinterest
Labels: Redcoats and the Sudan, Sudan, wargaming