For our last show of the year we headed North, to Pudsey Civic Hall. This is the furthest North we've been with the NBS stand, but it seemed like a good idea to me as Mrs T and I could take the chance to drop in on our son and his partner who live in the frozen wastes of West Yorkshire. Phil drove up the following morning. Which was the wise choice. We took nearly 5 hours on the Friday, due to a serious crash that blocked the M1. Phil took 2 hours 10 minutes on Saturday morning. 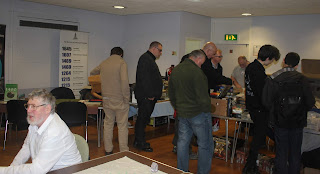 The show is similar in size to Hereward and smaller than Alumwell. It is held in one of those 70s Civic Centres that could be anywhere in the country. Biggish hall with a stage at one end, with committee rooms up stairs. When I got there I couldn't find us in the programme. That's because we weren't. We weren't in the main hall either. We were upstairs. Next to the Bring and Buy. And the Fire Exit. We'd been given the three tables we'd asked for, but couldn't really use all of them as one had to be against the wall. 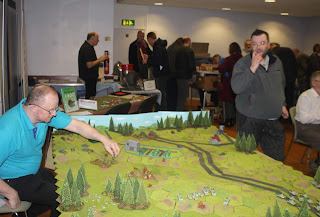 Next to us was a big modern tank game, being played on hexes. 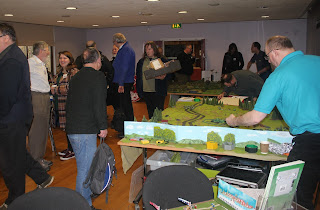 People kept bringing stuff to the B&B all morning. Not too much interest in anything else in this room. 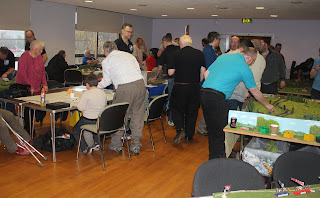 The room was pretty busy all day. We played "1460" 4 or 5 times, which isn't too bad, but it wasn't a very user friendly place for people to stop and sit. Had a couple of good long chats with folks about the WotR and Northampton, so not entirely wasted. 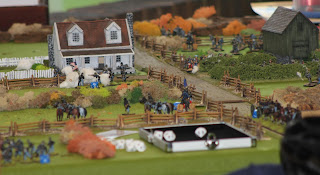 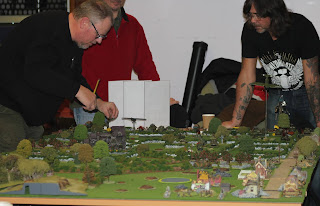 This is some WW2 game. The people running it seemed keen. 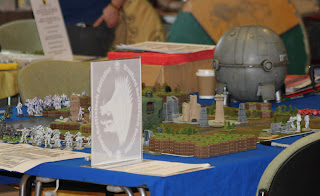 And the obligatory sf game. The globe is a drop ship of some description. That's the Dark Ages reenactors behind them

Didn't see a lot of originality in the games. The trade show part of it was not bad for a show of this size, - a lot of Warhammer stuff, but otherwise only really Pete Berry was there out of the Northern manufacturers. To be honest, they'd have been pushed to squeeze more in.

I'd probably have been more enthusiastic if I hadn't driven that far to get there. It's a good local show, and as such I'm glad we were able to support it. If we were to go back, I'd want a guarantee on a better location.