After last week in Mexico we headed even further south, to the guano fields of the Atacama Desert, and a return to the 1879 "10 Cent War" between Bolivia, Peru (as allies) & Chile.

These chaps haven't been out of their boxes for a couple of years or so, and they are one of my favourite collections, and I do like the rules I wrote too. ("It's Getting a Bit Chile". About time I put them in the downloads, I suppose). 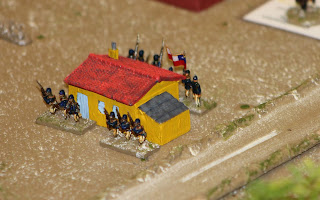 Without overdoing the scenario design I had a brigade of Chileans guarding an important border crossing, close to a nitrate "mine" (open cast diggings, really). Here's a battalion making itself at home in the foreman's hacienda. 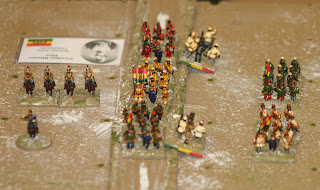 The Bolivians were headed up by President Diaz, and included his elite units. 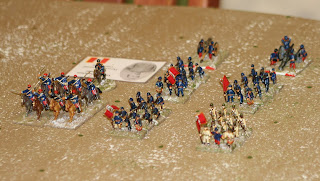 He was supported by a Peruvian large brigade, under Colonel Bolognesi. He had some proper cavalry. Both were played Richard. 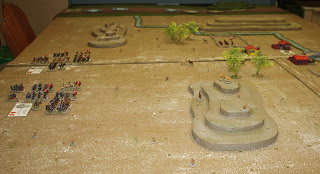 This is the full battlefield. The Chileans are expecting some reinforcements to come up that road on the right hand side. 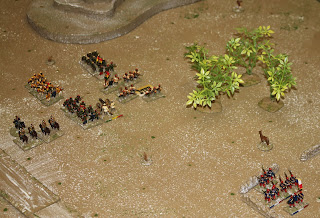 The Bolivians headed straight for the mine area, surrounded by the adobe wall (I seem to have lost my mine buildings and sheds, if I ever had any). 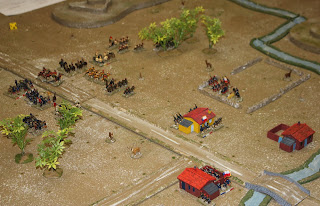 Steve had the on-table Chileans. They were defending the mine area and the two haciendas. The undefended area is a store house. 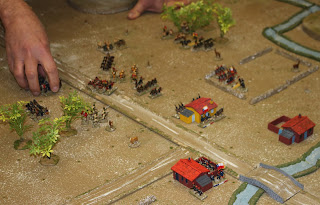 Richard was developing two separate attacks, one at the mine and one at the yellow hacienda. 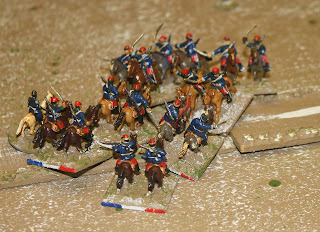 Meanwhile Phil had arrived with some reinforcements. Richard tried to cover that flank with his cavalry. Phil charged in, leading the charge personally on his white horse. 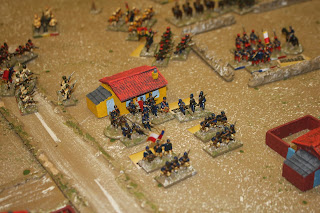 The Chileans were being forced back in the mine head (well, more diggings really), and were evicted from the hacienda. The hand to hand fighting was brutal and desperate. 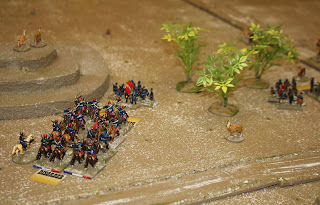 Phil was gaining the upper hand in the cavalry melee. His command figure is a bit of a firebrand in hand to hand (really, - that;s what his command card implies). 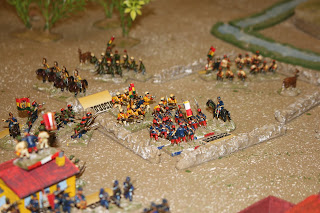 The Peruvians were on the roof of the yellow hacienda, waving their flag, whilst the fight in the mine was intensifying. Steve's General was stuck in, inspiring his troops. President Diaz, for Richard, was hanging back, providing more mature leadership. 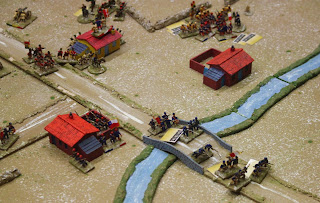 The men from the yellow hacienda fled over the bridge, pursued by their attackers. The defenders in the left hand building got to shoot them up a bit. 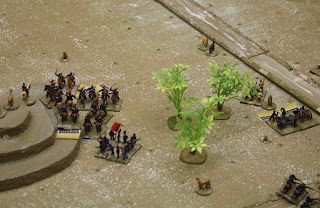 Phil's cavalry continued to drive the Peruvians back. The Peruvian infantry was forced into a square to stay safe. 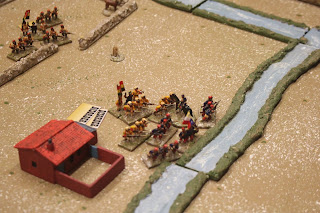 The troops in the mine area were finally broken, and looked like all dying in the raging river torrent. 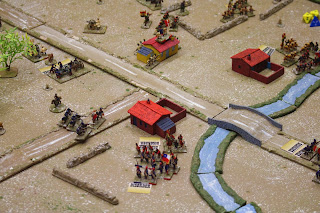 The other building was soon in Richard's hands, as the Peruvians prevailed in a bayonet attack, pressed home in the face of intense rifle fire. 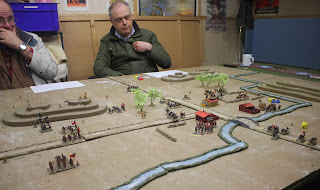 When we finished Richard was in possession of the objectives, but Phil was bearing down on him from his flank, having cleared off his cavalry.

Everyone was complementary about the game. Steve would have liked more toys and guns, which is fair, as he ended up as a bit of a punching bag.

I identified a few things I could do with working on in the rules, although nothing serious, so we might have another one or two games over the next few months.
Posted by Trebian at 17:00