Okay, so the year isn't over yet, but I don't expect to get any figure games in before the end of the year, so a count up for the last 12 months is possible. As I did for last year I've broken down all the games I've blogged about (which should be everything) into periods and rules. As last year I haven't included board games, except for "Fighting Sail", which is morphing into a favoured table top game. 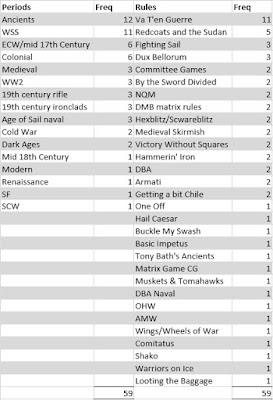 First reaction is that's more games than last year, and I have got my average over 1 per week. That's quite impressive as I was out of the country for nearly 6 weeks in New Zealand in March. Part of the reason is that I've taken part in more all day games sessions, and done an extra conference over last year. I've also got 16 periods listed and 30 rule sets, so that's up on last year too. As last year I'm my most favourite rules writer, and the most anyone else got on the list was two sets, so well done Mike Elliott, Neil Thomas and Arty Conliffe.

No surprise that "Va t'en guerre" was the top set of rules played, as they were under development for over six months. What is a surprise is the dearth of rules from RFCM, with only an old set of Hammerin' Iron on there. I'd have thought PBI would have turned up at least once and also there's no "AK47 Republic" for a second year in a row. Last year I predicted a lot of "Hail Caesar" but I have been spared that. And only one game of AMW, same as last year.

"Dux Bellorum" is another real surprise inclusion, but that owes more to a friend's enthusiasm for them and also "Redcoats in the Sudan", which ended up being used as they filled a particular need. The real Dark Horse I would say however would be "Fighting Sail". Didn't see that one coming.

What does this set up for next year? The simply named "Medieval Skirmish" need to be finished off as my ADG for COW and it has been a while since I did anything with the Russian Civil War. Perhaps that's good guess for the coming 12 months. Oh, and the Jacobite Rebellions. That's a project I'll be picking up shortly, as the books have been read and the figures ordered.