Tales of the Cid

After a bit of a break for them I got out the plastic Reconquista figures again. I wanted to give them a go with Armati after I'd had another look at the army lists. I'm struggling to be satisfied with any lists I've looked at. The evidence we have is sketchy in detail, so individual interpretation is King. For my part there are also things I think look "right" but run contrary to most designers requirements. I prefer my cross bows with 3 figures per base rather than two, for example.

It was thus on a cold and snowy night that we were to try out some small experiments with El Cid & Armati. 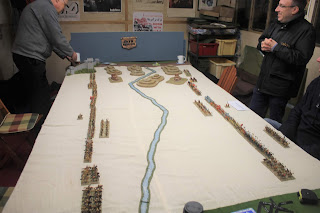 So the armies were a bit bigger than the normal Armati armies, and included a different troop mix and some extra troop types, too (why does no one like slingers?). I wanted to try something with a fight on a plain near to a rocky mountain area. I did the mountains and valleys by putting together a number of hills with gaps between. This then cried out for a river to flow out of the hilly area. Then Richard arrived and observed that my "Great Wall of China" looked a bit like a Spanish fortress, so that filled in the corner.

We started the game with Richard & me as the Arab alliance of Al-Andalus and the Almoravid invaders. Tim & Steve took the Christians. Phil turned up a little later and helped them out (although he couldn't do anything about Tim's die rolling). 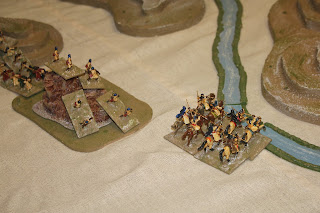 Richard had the left wing and pushed our light troops into the hilly uplands. 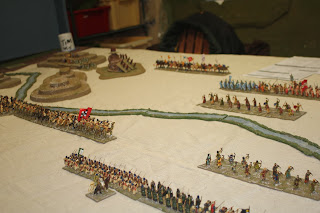 Both sides moved steadily towards the stream. Our secret weapon was the camel units mixed in with the heavy cavalry, to confound those hard charging Christian Knights 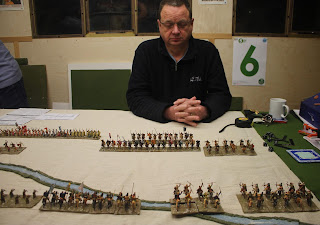 On my wing I was facing off against Steve, who was giving it all considerable thought. He'd been lumped with the set up I put on the table, which Phil dissected in the post match discussion (the reserves are too big to manoeuvre properly, and the foot have been deployed too wide for starters). 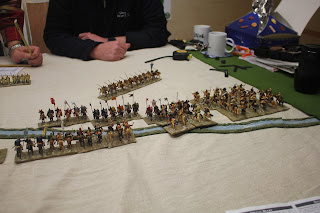 I confidently decided we did not need to evade in our turn, but had estimated the distances completely wrongly. Consequently my LC with javelins got caught by Heavy Cavalry, and my LC with bows got caught by Steve's LC with javelins, who have a higher fighting value. Oops. In this period LC are key units. This could have proved a costly error, as there's nearly enough BPs up for grabs out there to break the army. 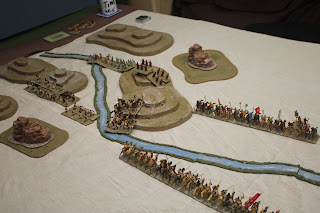 Over on Richard's flank he'd set up a flank trap for Tim's cavalry, although this was at the risk of being duffed up by the Light Heavy Infantry Cross Bows. 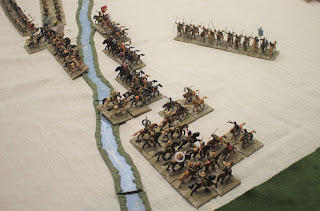 I got lucky on my flank, and succeeded in killing one of Steve's light cavalry, causing a division break and pushing the initiative in our favour. My light cavalry javelins are holding on against the Christian Knights. The Caballeros Villanos are lining up to come through the gap which it is expected will open up soon. 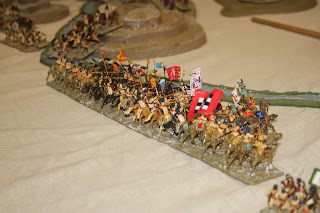 The mounted units clash on Richard and Tim's flank. Tim has staggered the charge to avoid too many units hitting the camels. The camels on the far end, however, do manage to panic their opponents, which will be great news if we can get the flanking light cavalry involved. 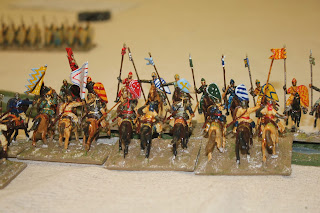 This is just a colourful eye candy shot. 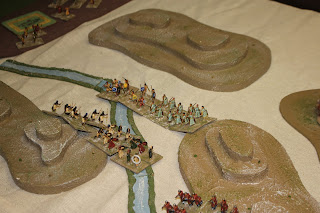 The light infantry are at it in the mountains. This terrain stuff needs a bit of working out. 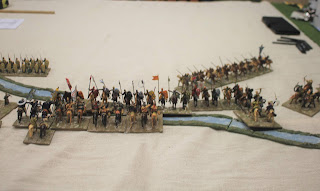 On the right the light cavalry battle has gone in my favour. I'm wheeling that unit on the right in order to make a flank attack next turn. Then I realise, after a prompt, that by stepping one of his reserve cavalry units forward Steve will be able to catch them. Ah. 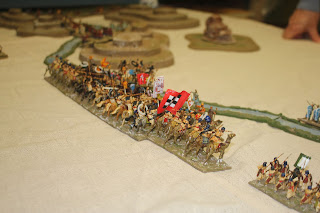 The tussle on the left continues. Still looks lovely and colourful. 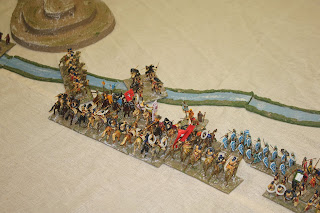 Richard has broken the end Christian Knight unit, and his camels and light horse fall upon the next victim. The camels again panic their opponents, which leaves Phil incredulous. Surprised me too. Never seen it happen before, let alone twice for the same unit in the same game. 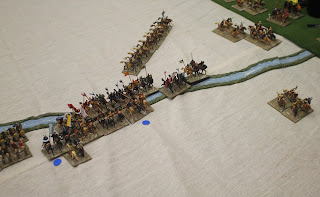 Having inflicted a shooting hit on the Villanos, my light horse go for the evade move. We were going to lose the initiative roll anyhow (BTW I'm using blue counters as I've run out of black "fatigue" rings). 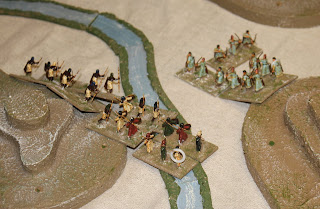 Richard was steadily winning the battle for the hills and valleys, but this was now a sideshow as no key units were out there. 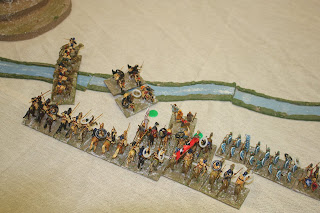 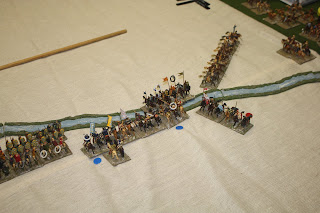 Finally I fluke a win in the big cavalry melee on my flank, giving Richard & me the game 6 kills to 5.

I note that I don't seem to have taken many pictures of the big infantry melee in the middle of the table, which is a shame, but it was proving inconclusive.

I can't claim we showed any particular tactical prowess in achieving our win. As I said above we were helped by some abysmal die rolling by our opponents that enabled us to inflict quite a few shooting hits before closing, and the camels out performed expectations massively.

I have never written my own rules for these armies, and I don't know if I want to now. Using Armati as a basis for scenario games, with specific tweaks for each battle might be the way to go. But it might also be an idea to have a look at Dux Bellorum too for a comparison.