The Marlborough project last year made me think about what else the figures could be used for, and I pretty much thought of the 1715 Jacobite Rising immediately. Cursory research indicated there wasn't much difference in the "uniforms" of both sides in the '15 & the '45, so it seemed a good idea to get in some kilties, and work out a way to have swappable flags (pre & post Union) for my Marlburians*.

The figures I have bought are from Redbox & Strelets. Redbox cover mostly the Loyalists, although you could use some of the figures for both, but don't have anyone in wild Highland charge mode. Strelets appeared to have lots of broadsword waving fanatics, according to Plastic Soldier Review, but were out of production. However, an email to their office in the Ukraine (!) elicited the response that they would be re-issued in December. So, Christmas present sorted.

I'm still working on how to depict my Highland / Rebel units. I've read Stuart Reid's various books and also Duffy's monumental work, so I know I don't want them as full-on rabble, but I don't want them as completely formal as the British. So, ducking the issue, my first unit is made up from Redbox Highland infantry, and represent Loudon's Foot, who fought for the Government in the '45. 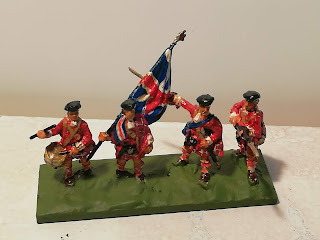 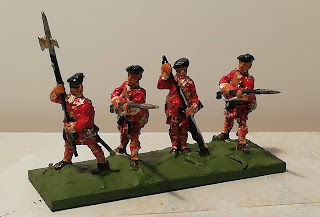 Painting tartan is horrible, so I have no idea why I thought this was a good idea. MNG-r Will gave me a helpful guide on how to do tartans, which I have followed, and it seems to work okay, if you can tell in the pictures. 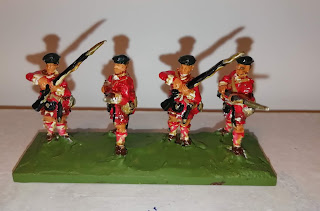 Unusually I have mixed poses in the units. This is mostly because I didn't buy masses of boxes to enable me to sort out loads of identical units. 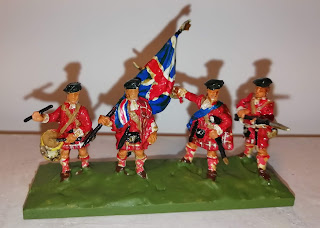 I think they've come up okay, and the stockings and kilts look convincing. 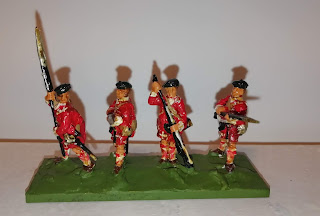 I did these pictures with my new phone, not the SLR. They look okay, I hope.

I've had a couple of abortive starts at the Rebels. Currently my last attempt is soaking in a jam jar with some Dettol household cleanser to enable me to have another go. Ho hum.


*I have sorted this problem, so no need for suggestions, thanks.
Posted by Trebian at 17:42