Back at the keyboard

It's been quiet here for the last couple of weeks as Mrs T & I have been off on holiday. We've just spent a couple of weeks in Myanmar (Burma to most of us), on a River Cruise down the Irrawaddy and then visiting some other sights such as Inle Lake and Yangon (Rangoon).

I felt this trip would be quite safe, as I already have a couple of Burmese armies. I've had XIVth Army and opposing Japanese for quite a while (Peter Pig miniatures for the XIVth Army, - much recommended, despite some quibbling from those who asked for them). And I bought an Irregular Miniatures Burmese DBA army after my visit to Cambodia, so that should be enough for anyone.

I read a bit about the three Anglo-Burmese wars fought in the 19th century*, and despite the presence of elephants and different shaped straw hats to normal I avoided the temptation, and continue to do so. There were some nice pieces of silver work we saw of military elephants and some other art work, but nothing that really gave me time and place and inspiration to get involved. I got the feeling that the Burmese aren't that comfortable about talking about their military history so much. They did run a fairly brutal military regime from the 14th through to the 19th century, in one form or another, with routine massacres of their own people and the various minorities that make up modern Myanmar. Perhaps their post-colonial failures to get a settled democratic government shouldn't be a surprise. It just hasn't ever been the way things are done. (I found that the non-Burmese guides from the minorities were more comfortable with British rule, as it stopped the majority Burmese kicking them about**).

Also, unlike Cambodia, their temples/pagodas/monuments don't have the profusion of carvings like you see in Angkor and for various reasons we didn't visit the national museums with the relevant artefacts. And I didn't see any handy English language Burmese history books to pick up either.

So, what did I see or do that was relevant to my hobby? Well, I took George Macdonald Fraser's memoir of the Burma campaign with me and read that, trying to fit his descriptions in with the landscapes and countryside buildings I saw. Reading that convinced me that those who carp about the Peter Pig figures are wrong. GMF clearly says that he and his section went into action in Bush Hats and not helmets, so there you have it.

I did keep an eye out for any model buildings that I could fit into a DBA camp or use with the XIVth Army.

Turns out this was harder than expected. As a guide explained to me everyone wants little model Buddhas. Why would you want a model Stupa in your home? Alas the thriving laser /die cut wooden puzzle building industry that reaped such a harvest for me in Iran & China has not made it to Myanmar. I did in the end pick up a couple of models, and some mini elephants to make the statues that stand guard at the entrance to the compound. 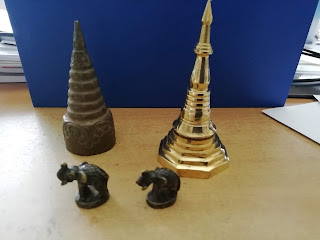 I'm not sure how to deal with them all yet. Clearly some metal primer for the elephants and the stupa on the left, but I don't know what to do with the shiny one. After all, pagodas etc in Myanmar are very shiny: 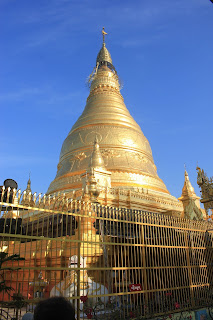 Problem is that natural metals/materials never look right in my eyes when you scale them down.

We did end up in Rangoon/Yangon on the trip, and toured the City a bit. It is in need of some TLC, but has massive potential. There are some really magnificent colonial era buildings that are falling into disrepair that would make very nice hotels or company offices. The only one that is receiving any serious attention for now is the Secretariat, which was the home of the Government Offices, until the military junta set up their new capital up country. The Secretariat is very special to the people of Myanmar as it is where Aung San Su Kyi's father (General Aung San) was assassinated. It'll be impressive when it is done.

So that's where I've been. Nice country, nice people, lots of temples and stupas.

(NB A temple is the home to Buddha statues where you can pray. A Stupa is a memorial/prayer building which is solid, - i.e. you cannot go inside them. A Pagoda, in Burmese terms, is the name given to the complex that contains temples and stupas together).

* Unusually we did not start this one. The first Anglo-Burma War was caused when the Burmes invaded what was then India, because they thought that the East India Company were a bunch of softies. That proved not to be the case.
** Plus, under the British, production of rice and teak went up massively, and when we left Burma was the rice bowl of South East Asia and there was more acreage of teak than when we arrived. That is no longer the case. Clearly Empire is wrong as a general idea, and self determination is a Good Thing, but not everyone benefits all the time.