By way of a complete break from current games, and back refreshed from ANOTHER holiday (how the other half lives), I thought it might be time to introduce some of our newer players to a new period, - so it is back to the Middle East, and "To Ur is Human", last seen a couple of years ago.

I did have an ulterior motive. I'm looking at Jacobite warfare, and I have a feeling that some form of Fear Test, like the one central to these rules, might be useful, with a Fight/Fright/Flight mechanism. 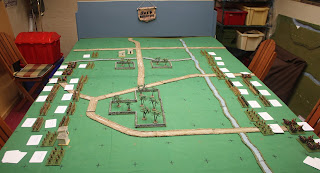 It was just me and Steve due to other commitments (wife's birthday, - what sort of excuse is that) and general infirmity. Steve hadn't seen these toys, and I'm not sure if he really knew what to make of them. 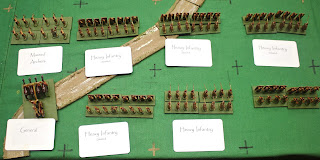 The white cards are unit cards that enable some form of secret deployment. Steve was happy to go with what I'd set up, which ended up being unfortunate for me, as I'd got my army a bit wrong. 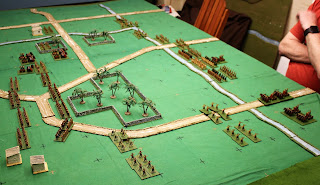 Steve started by moving up his light infantry to screen his battle carts. I settled on trying to break his right centre with some shock and awe from my battle carts, whilst bolstering my right with some heavy infantry. 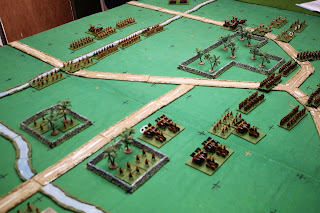 I got the distances wrong with my lead carts, and took damage from the slingers in the palm glade. I needed to clear them with my javelins before I could chance advancing further. 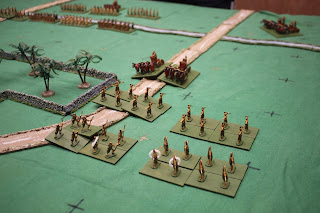 On my right I took some damage from the light infantry. 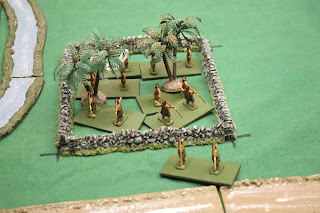 On my left I sent my javelin men into the grove... 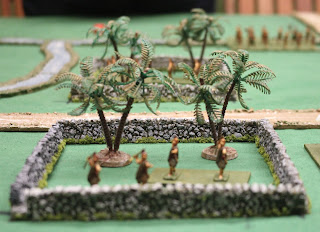 ...and they immediately turned and fled. 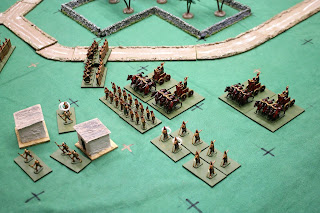 On my right Steve rode down his own light foot with his carts to get at me, and broke my unit behind, seen fleeing into the village.Luckily I had got some heavy infantry in place to stop the rot, although I hadn't been able to line up any supports, which was unfortunate. 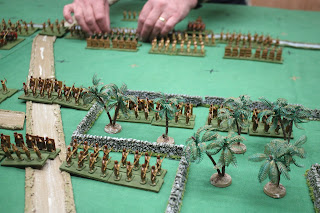 In the centre I had occupied the main palm grove, and Steve finished crossing the irrigation canal and advanced towards me. NB The walls are just to delineate the edge of the grove; they aren't a physical barrier. 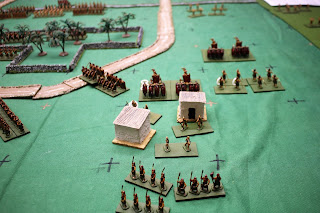 My lack of supports on my right cost me dear, and my infantry fled in terror before the fearsome battle carts. 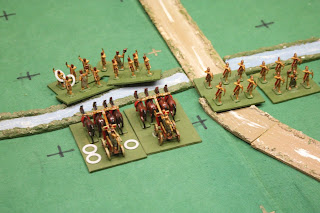 In my left centre one of my battle cart units braved massed archery and slingshots and broke the unit of archers in front of them. (BTW my other units of carts is tearing off to my right wing to plug what might become a gaping hole). 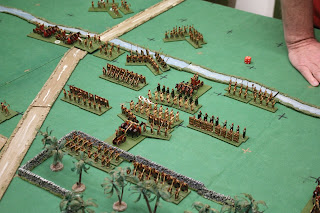 It's all getting tasty in the middle. The heavy boys are facing up to each other, and we have both committed our Lugals (Generals) to the struggle. Faced by Royal Guards in white cloaks my middle units are beginning to waver, but my left hand troops have broken their opponents and supports and my battle carts are about to mash up their opponents too. 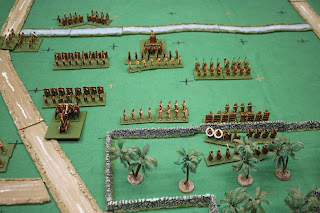 And then my centre broke, with my Lugal skipping out by the skin of his proverbials. My right hand unit in the palm grove is starting to look a bit shaky. 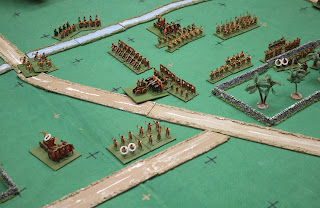 Having broken one unit, my carts retire before they are completely destroyed. My infantry is now lining up to roll into the centre. 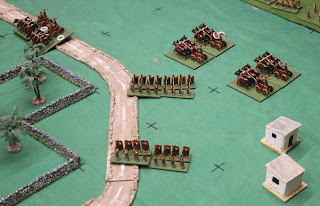 On my right Steve is pulling back his battle carts to help bolster his centre. My second unit has finally got round, and that's them chasing the unit with two white rings, that I just inflicted with javelins. 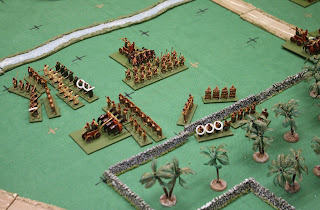 Steve has pretty much finished off my centre, but I'm lined up to roll over him if he doesn't turn to face in time.

We ended then after a couple of hours play as it was time to head home. I might have been marginally ahead, but it was close.

I have a lot of affection for these figures and the rules. The Fear Test mechanism works pretty well, and it is all about intimidating your opponent. If the threat doesn't work, units like the carts come unstuck pretty quickly.

I don't like the combat system that much, - it's slightly modified from Neil Thomas' AMW, and I always meant to swap it out completely, but never got round to it. The Fear Test relies upon knowing things like who will roll the most dice in combat, so the combat mechanism feeds into Fear Test in a way that is different to simply causalities inflicted, so harder to replace than I'd like. The idea of the initial Fear Test is it is based on what the likely outcome is, not the actual, so it simulates troops panicking in the face of threats.

Any how, I think there's mileage in the system yet, and it may well work its way into the Jacobite rules. We'll see.

Oh, and the rules "To Ur is Human" are available top right if this has tickled your fancy in any way.