So we had another go with the 28mm fellows and "Hail Caesar". After the last game Phil had done some rebasing and was working on a way of recording Stamina levels using those mdf trays with circular receptacles. Richard and Tim turned up for a playtest. Phil remarked upon how heavy 28mm armies are (he's normally a 15mm man) and I threw together some terrain as Phil's been focusing on the figures. 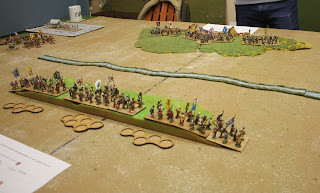 This is the view from behind the Rebels. We (well Phil) have developed a mechanism whereby archers are thrown forwards of a unit sort of in the style of skirmishers - see below. 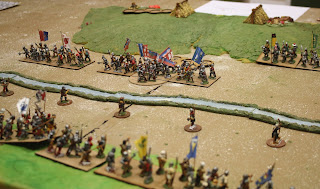 So the Rebels, by the time this picture was taken, had crossed the river and shot at Pembroke's men. He had led his forces down off his hill, and the Rebels had dropped back. Alas for Pembroke one of his divisions failed a command roll, so the Rebels were able to concentrate their archery on the man himself, causing quite a few hits, which Tim failed to save. 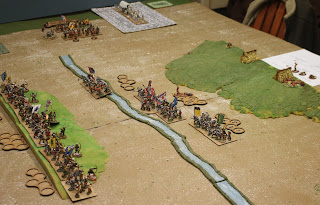 Deciding not to defend the river line, Richard dropped the rebels back to their starting position. Tim had eschewed the option of Herbert attacking on horseback to pin the Rebels in position and plodded forward on foot. 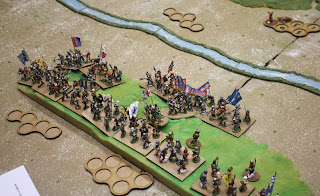 Pembroke's men slowly climbed the hill and the serious business began. Pembroke was really under the cosh as his left hand division was still being tardy, so he was facing two units of Rebels. 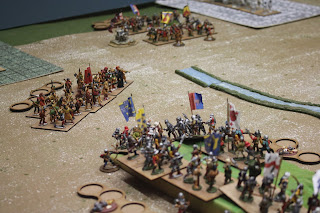 His right hand division was doing a good job on their opponents, however. The question was whether he would be able to break them before Clapham's men got stuck in. 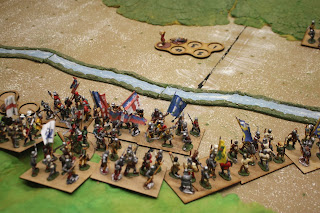 Now having two units attacking him, Pembroke's division retreated down the hill. Luckily, despite being Shaken, it carried on passing its Break Tests. 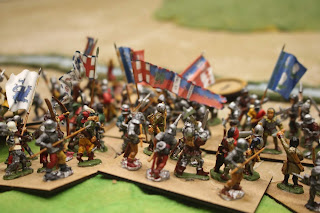 Close up shot of fighting in the centre. Just because y'know. 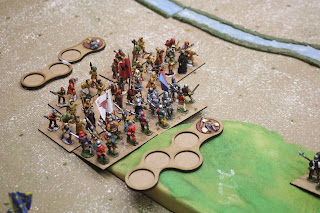 So Pembroke's right hand division broke their opponents and was able to turn and face Clapham's men. 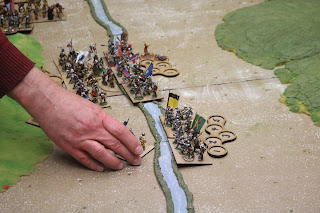 Finally Pembroke's left hand division came up, and the Rebels had to react, giving Pembroke himself some respite. 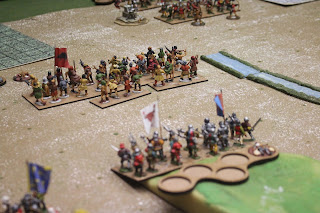 Clapham's men were soon history, heading back to Northampton. Out of shot Pembroke's other two divisions were both gaining the upper hand, and Stafford was returning to the field. So a Win for the Edward loyalists and the end of Redesdale's rebellion.

Quite a satisfactory outcome, - a close game with a non-historical  but believable win.

Personally I'm still not feeling the love for "Hail Caesar", but it is doing the job for us, and it will provide a familiar "way in" for people who stop by the stand. Phil has to do some more work on rule amendments and things like the reinforcement mechanisms, and we'll probably work through a few of the ideas at Alumwell on Sunday, 10th March, so come and say hello and share your ideas. We've even got a new banner. 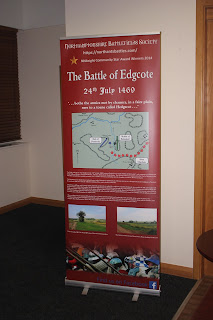