And finally some pain in Spain.

Just before my overnight guest had to leave for his train on Friday morning, we had a quick game with my "If You Tolerate This" Spanish Civil War rules.

I gave John a small Italian brigade. He asked for tankettes (why not) and some Carlists (I was going to give him Falange). I had some battalions of Asaltos, and a few International Brigades to defend a small town. 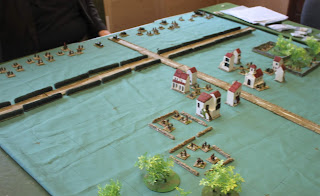 The hedge lined road represents a sunken road. I put it there to give John a form up position. I'm nice like that. 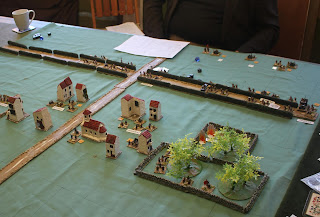 He rushed his units into the road as quickly as he could, and was lucky in that he passed all of his activation rolls, so I was unable to give him any interference. I was also working from an old set of rules that some how hadn't been thrown out, so things weren't being run entirely as they should have been. 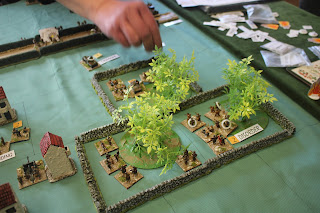 John massed his Italians supported by their armour on my right, to force me out of the olive groves. 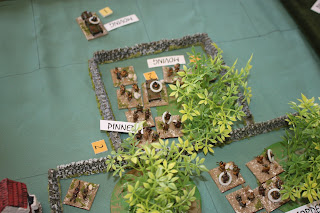 It was hard fighting, and my brave IB's held them at first, even inflicting a hit on the tankette squadron (each model represents three vehicles) with an infantry attack. 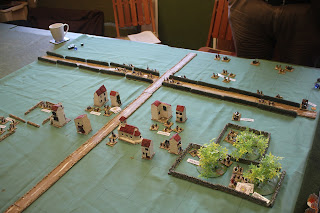 As John developed the attack on my right he was unable to get his Carlists out of the sunken road due to sustained fire from my units in the buildings. However, John's artillery was proving to be very effective. 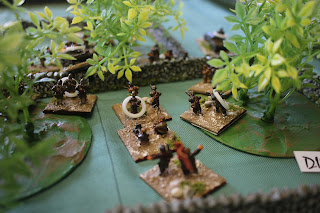 I was being forced back steadily in the olive groves...

... and more fascist armoured support was arriving too. 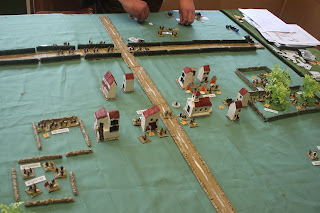 Heavy fire from the Carlists succeeded in driving me out of the front left buildings, - the perils of forward defence, I suppose- enabling him to advance when needed. 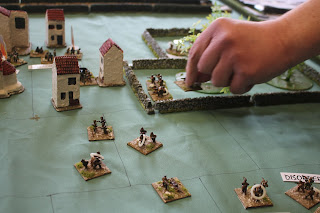 I was being cleared out of the olive grove quite effectively too, as my counter-attack had been bounced, incurring casualties. 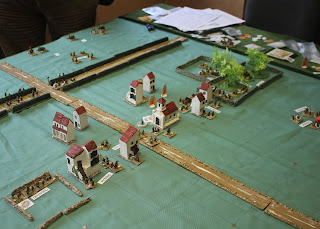 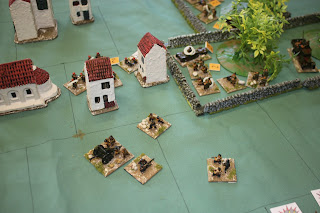 I was soon driven out of that as well, as some Carlists stormed over the open ground and into the buildings. My Asaltos counter-attacked and threw them back, however. 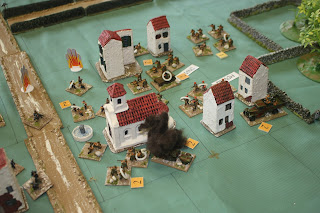 Then the Italians were back, and they managed to capture the church, albeit at the cost of their flame-thrower tankette. 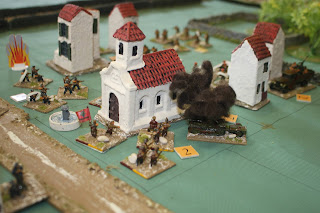 Which enabled me to take the church back again, with my last fresh unit of IBs.

It had been a to and fro battle, to say the least, but I was down to only a few viable units, so we called it a win to the Nationalists.

IYTT plays well, and I'm quite pleased with it as a system. For this game, as mentioned above, I was using a really old set of rules, and the game suffered accordingly although I don't think John noticed. Mainly because he was winning most of the time.

And then it was time for some lunch and for John to catch his train home.
Posted by Trebian at 11:25