After last week's try out with Basic Impetus this week I revisited the same period using DBA (did you see what I did with the title, by the way? "Doing Babylonians & Assyrians". See, it says DBA!!! Oh, please yourself).

Anyway, because I was filling an evening with more than a couple of players I doubled the army sizes and the playing board width. For the game we had me & Chris K as the Babylonians and Tim & Richard as the Assyrians. Alas Phil couldn't be with us, as he was away on Naseby Project business, so our resident DBA expert was not available. That meant I needed to re-read the rules and try to remember how it all fitted together.

In all the excitement I forgot to take a set up shot. Anyhow, the Neo-Babylonians are mostly Psiloi and 3 Bow, with a few Heavy Chariots (which fight as Knights), some cavalry and a bit of 4 Aux foot. The Sargonid Assyrians have Heavy Chariots, Cavalry, Spears, Auxilia and some 4 bow and a couple of 7 Hordes. I had to modify some of my existing figures to get the figures to bases correct. 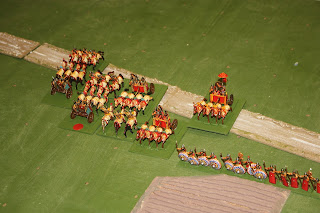 We join the action over on the Babylonian left, where Chris is in charge, facing off against Tim. Chris has already lost a cavalry unit in a fight with some chariots, and despite the presence of our General (denoted by the red counter) the best we got was a recoil. 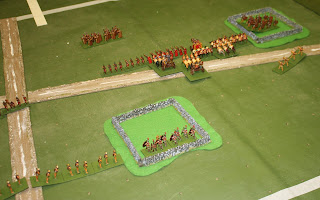 I achieved similar levels of success on my flank, where I didn't get any quick kills, and instead lost a cavalry unit too. 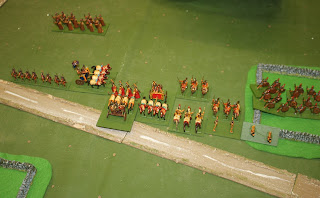 The next turn went in my favour, and I crashed through the spear wall and piled into the flank of the remaining spearsmen. Wasn't sure I got this exactly right, but we slid the Assyrian bowmen aside to let the chariots in. One of our problems now was a lack of PIPs on my flank, which meant I couldn't get our massed archery into play. 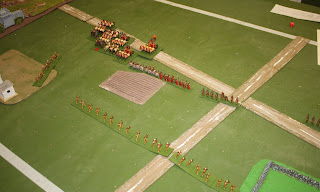 Tim started to exploit the gap he'd made, and passed his chariots through. Chris remarked that the big shields on the Guards looked nice, and asked if they were transfers or painted. They're painted. 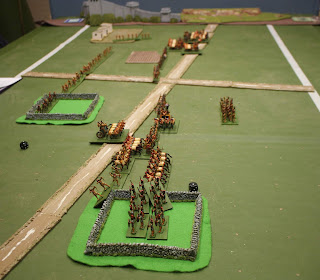 Typically, despite having the advantage, I got bounced by the spears. 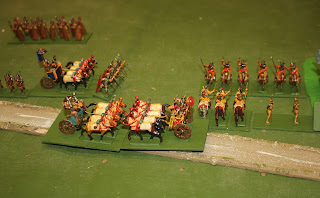 Richard was then able to push through and turn to face as appropriate to even things up for him. 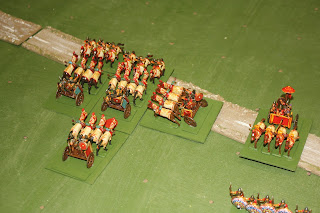 On Chris's side he was getting a bit surrounded by Tim's chariots. 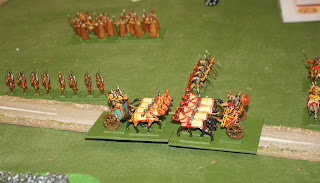 Richard's spears killed one of my Heavy Chariots. The one with my General in. Humph. 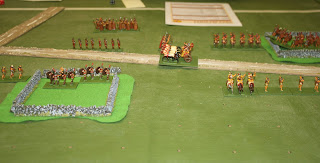 His General then killed my other chariot. I was now demoralised. Curses. 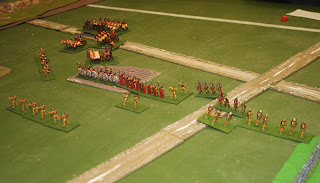 Chris did a Hail Mary attack with his psiloi, but was consistently bounced, even where he had an overlap (although I worked the overlaps out wrong). 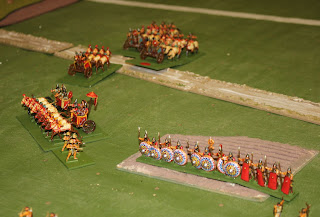 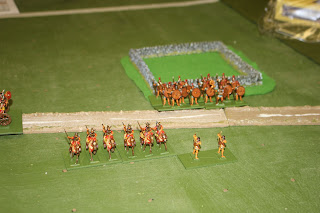 Richard was now just killing everything. The -2 tactical factor for being demoralised is a bit of a bummer. 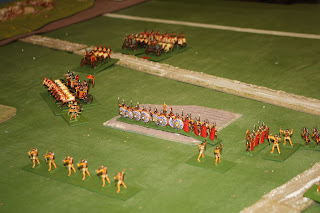 And then Chris was demoralised and we were beaten. 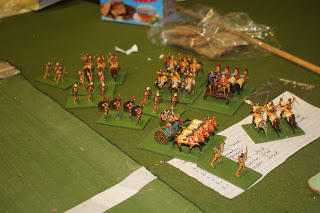 The dead pile was not an edifying sight.

When I haven't played DBA for a while I'm never sure if I'm playing it right. DBA is such a beautifully constructed mechanism that this does matter (unlike, say Hail Caesar, where you can do what you like, pretty much, and it doesn't really make any difference).

We played the game without camps, and I wasn't sure about the scenery I put out either. I think that the Babylonian army needs someone with greater skill than me to make it a winner.

We need to bring this back, preferably with someone who knows what he is doing.
Posted by Trebian at 11:58