My Neo-Assyrian armies have been kicking around for a while and I've never got a rule set I was happy to use with them, so it was about time to try Basic Impetus. MNGr Steve had talked about finding some old Minifig Assyrians in a box at home, so I thought it would also be good for him to have a look at how they do on the table top. As it turned out Steve was working so we had me, Richard & Phil. Phil oversaw things as he'd been playing Impetus Extra at the weekend. 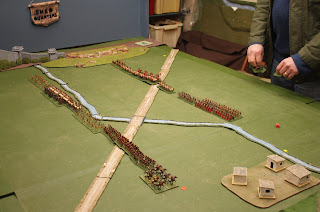 I managed to build a Babylonian and an Assyrian army from what I had, although I found the Army Lists not to be what I expected (the Neo-Assyrians don't have any Heavy Infantry as such, but make use of the light infantry troop type but with slightly amped up factors). I'm on the left, with the Neo-Babylonians, Richard is on the right. He is required to deploy his foot and archers together in deep units. 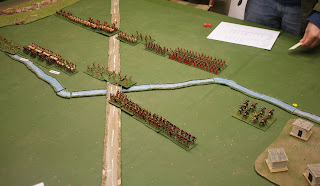 Being me I ignored the risk of being disordered crossing the river and got going (the river was a mistake, as it really favours the army with the bows that prefers to stand on the defensive). 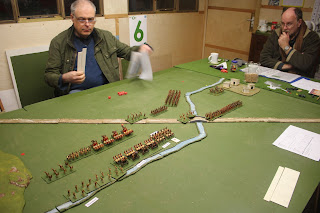 Once I'd crossed the river, Richard closed the gap. The full measure of my folly was now evident. I would either be fighting Disordered if I charged, or without Impetus if I stood to rally. Also, we've not really got to grips with how skirmishers work in BI. I should have had them masking my front a bit more, and the real BI specialists would have them deployed deeper so they can create that machine gun effect by moving through each other so everyone fires at the same target. Richard had succeeded in contacting my cavalry, but we had a drawn melee so I held my ground, only losing a point on my VBU as I was already Disordered. 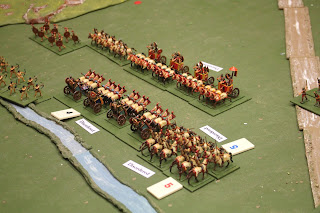 Here's the situation after another round of combat. My chariots have charged in and been bounced, whilst the cavalry stay locked in combat. I've avoided a cohesion test and Richard has passed his, losing a VBU point due to previous Disorder. Over on the left Richard is forcing my skirmishers back, cunningly drawing fire with his skirmishers to prevent his cavalry being shot up. 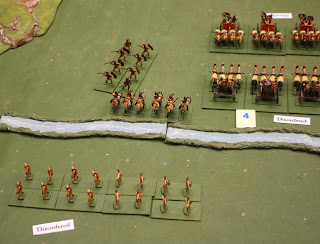 The next turn he launches a charge, which I evade. His javelin men now wheel in to give my chariots some grief. 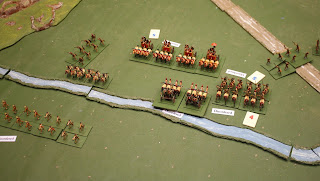 Another round of chariot combat sees my command unit killed and my chariots driven back a bit, which Richard fails to follow up. The cavalry trade another hit each. 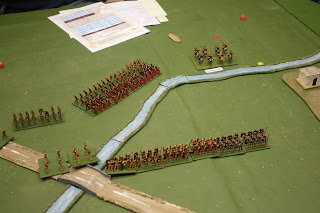 On the other side my Skythians have crossed the river and are getting ready to get stuck into Richard's infantry. My infantry line is now getting ready to wheel into a position to attack the Assyrian infantry head on. On the left of my line my skirmishers are exchanging shots with Richard's archers (Kallapani) 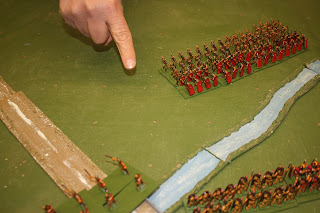 Richard, frustrated at the lack of success with shooting, charged my skirmishers. I failed the evade roll, and in the resulting combat we wiped each other out, much to everyone's surprise. Richard indicates the gap on  the table where it all happened. 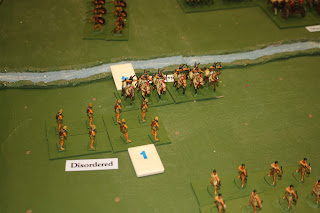 On my left half of my skirmishers evade the next charge, but half are caught. I manage to survive the onslaught. 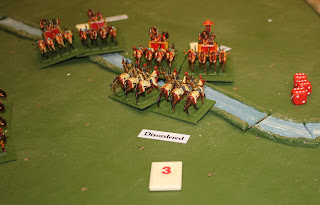 I succeeded in seeing off Richard's cavalry in the melee, but the loss of my other chariots unit exposes them to more danger. 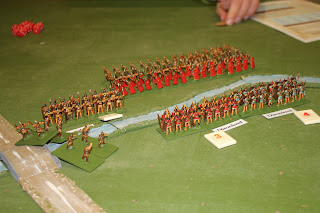 On the other flank my Skythians performed a text book flank charge, inflicted 3 hits to 1, then spectacularly failed their Cohesion test, and were removed from the table. My infantry charged across the river and were rebuffed with some more spectacular dice rolling. It was nearly all up by this point, as I only needed to lose another unit and I was beaten. 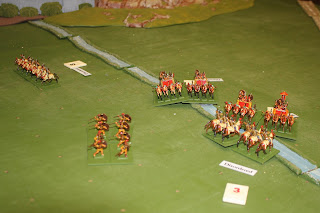 The coup de grace came on my left, where I lost my last skirmishers, just before my cavalry were destroyed.

Well, an enjoyable little game, even if I did get royally trounced. The terrain wasn't my friend and I made a couple of big errors. I had a chance or two to turn the game, but they didn't come off.

BI has a lot going on in it which I find intriguing and frustrating in equal measure. I realise I'm not using full Impetus, which I would like to see, although Phil remarked it mostly has more of what I don't like, so perhaps not.

Perhaps next week I'll see how DBA or Big Battle DBA works for these chaps.
Posted by Trebian at 10:51