So I wrote a book 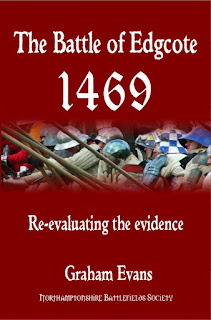 Edgcote has been a bit of a theme over the last year or so for me and the Northamptonshire Battlefields Society. Together with Phil we've given a presentation or two, we've walked the field and painted a few figures. We've even done a few games.

Why all the Edgcote activity? Well this year is the 550th anniversary, and the Society has been organising things under the umbrella of "Edgcote 550". As it is a not well understood battle it seemed like a good idea to use the anniversary to promote our understanding a little bit.

One of our aims was to publish a book on the battle, like we have already done on the Battle of Northampton. As I worked through the research for talks we were giving a number of questions came up that needed to be answered that it didn't seem that earlier writers had dealt with. What I ended up doing was writing a series of essays on things like the historiography, the size of the armies, the location of the battle and so on which then linked together to make a coherent description of the campaign, the battle and the aftermath. Whilst doing that I also assembled files of pretty much all of the primary sources (and go some of them re-translated) so I had a decent sized appendix of what we know.

Having assembled all of the text I then visited a few of the locations and took photographs then laboured long and hard over putting together some suitable, clear, maps.

The book is being published under the auspices of the Society, through the Amazon print on demand service ("Kindle Direct Publishing"). Rather than upload a Word file I fired up my desk top publisher and learned how to use the book publishing functionality. This let me send a printer ready pdf to the printer.

I then got several people to read and comment on the text before ordering a proof and asking Mrs T to check for errors. Getting the proof was irrationally exciting, and so important. I'd got the page numbers for most of the book offset by 1, for a start. And there were a lot of typos I hadn't seen on the screen. Once it (the proof that is) had been passed around the Committee for comment I was in a position to order the first printed batch, - which arrived today! 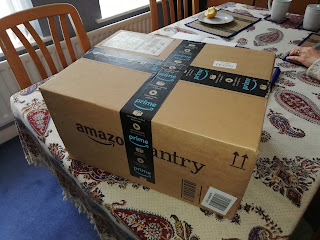 Confusingly the box said "Amazon Pantry" on it. Mrs T wanted to know why I'd ordered a box of jam. 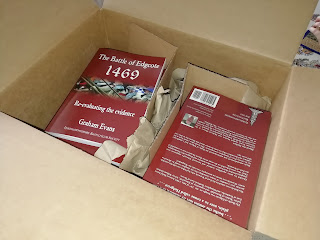 In the meantime if you can't wait you can order it direct from Amazon, where you can also read my "Authors Page". Well, there are at least 2, if not 3, other Graham Evans' who are writers, and they sort of write history books, so it is important to distinguish me from them. (This shouldn't have come as a surprise, - there's another Graham Evans who is also a wargamer, although we've never met to my knowledge).

The Society is also organising a full day conference on Edgcote in July, details of which are on our website. I'll be talking about the way the sources have been used to describe the battle, and we have several other distinguished speakers as well from the Society, the Battlefields Trust and the University of Wales (well, lots of Welsh people did die at the battle). It would be good to see some of you there, - but I wouldn't hang around if you want to come. We've already sold over a third of the tickets and there's still three months to go.

Now I'm off to the Post office with the review copies.

Email ThisBlogThis!Share to TwitterShare to FacebookShare to Pinterest
Labels: Edgcote