A friend I know through WD came for a visit as he'd been booked to talk to the Battlefields Society about the SOE & OSS missions that were flown out of Northamptonshire. As he'd have to stay overnight because of the distance travelled it meant we could squeeze in a few games. Besides he'd never played a game in Shedquarters, so that was an omission that needed rectifying. He'd also never played "Taiping Era", so that was another gap in his education that needed filling. And the Ever Victorious Army has only had one previous game, so why not? 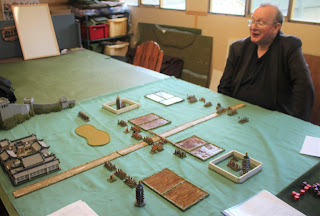 John got here in time for lunch, as neither of his trains was delayed in anyway. We then repaired to Shedquarters, where he took the role of "Chinese" Gordon (who I still need to find a General figure for, so the Colonel of the Royal Dragoons stood in for him again). I had the Taipings, defending a small village from "liberation" by the EVA. 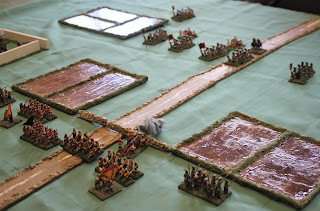 I felt pretty secure, with my flanks covered by some compounds with Pagodas in them, and paddy fields to slow the EVA down. I even had a gun, which I fired at them as they advanced. 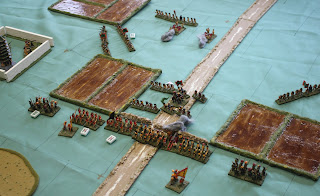 It wasn't as effective as their artillery, and also their infantry had more modern rifles, and were able to engage me at longer range and inflict a bit of damage. It's been a while since I last played these rules, and I have to say that John grasped what was going on and how to play them quicker than I did. And I wrote them. The little mah-jong tiles behind the units show when a unit's self confidence ("Moral Vigour") has been degraded. The most effective units on my side seemed to be the ridiculous jingals concealed in the Pagoda compounds, which caused a bit of damage. 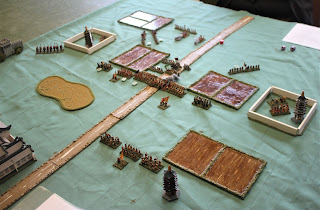 John pressed forwards in the centre, General Gordon being in the thick of it all. 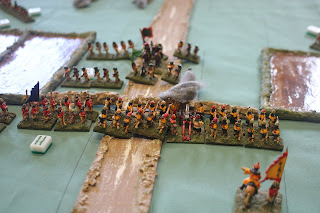 He softened me up with some intense rifle fire before charging home. 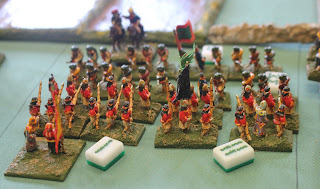 After a brief period of confusion over how the melee rules worked, we were soon matching steel bayonets against bamboo spears. The little tile on the left represents 2, and on the right, 4. Next time I fight I will need to roll less than each of those numbers on a d8. 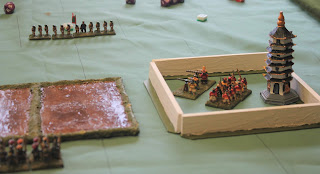 Still, my jingals have driven back the unit threatening them, so not all bad news. 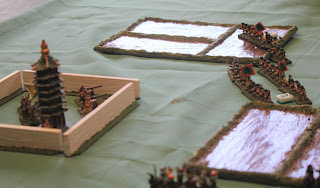 The resilience of my defences on the other flank are forcing John to transfer increasing numbers of troops to deal with them. 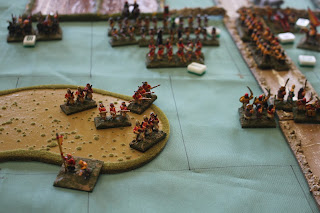 Then one of my units in the middle breaks and flees (yeah, didn't roll less than two. What a surprise) 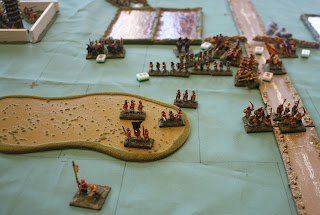 No matter. My other two units in the middle turn to their left flank and fall upon the cocky EVA fellows who think they have the upper hand. 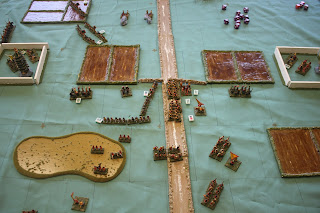 Curses! They do, and I'm bounced back to my starting square. Meanwhile, top left, you can just see my cavalry coming in to view, preparing to ride down that unit of conscripted lascars. Hah! They don't stand a chance. 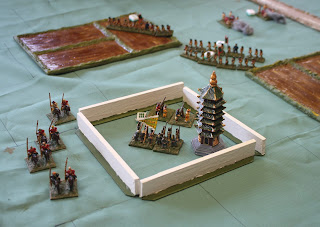 Dammit. A couple of volleys are enough to see my bamboo wielding lancers streaming to the rear. 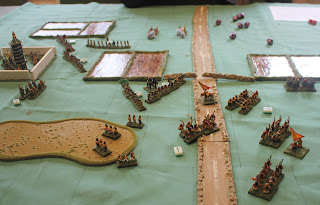 More of my centre seems to be going backwards as well. All very annoying (although out of shot my right hand jingals have managed to do enough damage to the unit threatening them the encourage them to leave the field, no doubt carrying news of my triumphant victory and the death of all their colleagues with them!!!!) 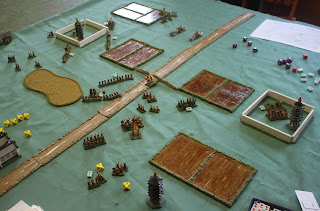 Well, it's all over now. The left hand compound has been cleared out by rifle fire and everything else is going backwards too. A well deserved victory to my visitor, who pronounced himself impressed by the rules and the game. Not at all influenced, I am assured, by the fact that he won.

What a pleasant way to spend a wet and blustery afternoon, and there was more fun to come...