We all love a bit of Armati. Well, Phil & I do. And Steve suggested we should have a look at Teutonberg Wald. So why not combine them?

We had a full turnout for the evening, pretty much, with Richard & Dave taking the Germans, and Steve and Tim the Romans. Phil acted as adviser to the Romans, mostly, and I helped out the Germans with hints & tips and did some umpiring (obviously my help is of considerably less value than Phil's, as he was once Armati Derby World Champion). 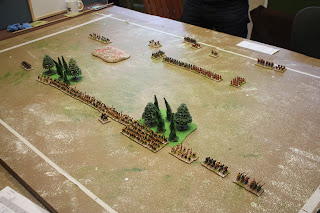 In the army selections (which I did for both sides) I gave the Germans an extra wooded area. I put up the deployment curtain whilst both armies set up. When pulled back it revealed the armies were both deployed mostly centrally. They're quite big armies by Armati standards. Well, the Germans are any way. 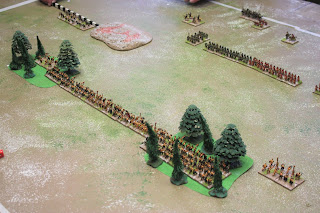 No hanging back for the Germans, so off they trundle towards the Roman army. They have a preponderance of cavalry, so their flanks are secure. The Romans have set up in more of a box formation, using cohorts in depth as flank guards. 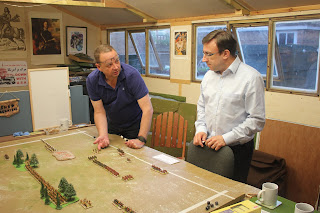 Steve and Tim debate tactics. There sure are a lot of Germans. 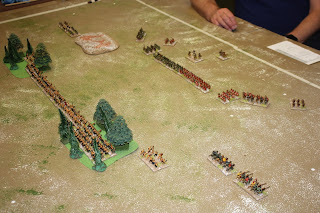 The Germans immediately reckon they can get an advantage out on their right as they have more and better cavalry, and also light infantry, which is good for mushing up cavalry too. The only thing to fear is that column of legionnaries with red shields. 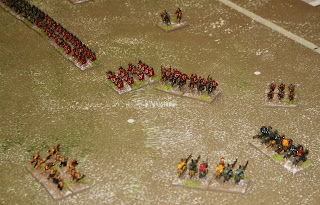 They're doing a good job of going out wide. Those lance armed cavalry are Sarmations, so a bit tastier than the other horse. 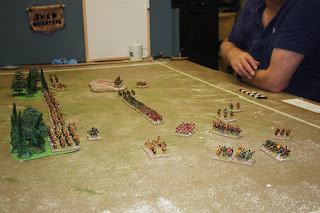 Finally the German infantry line makes it to edge of the wood. Poised to charge out and stick it to the Romans. 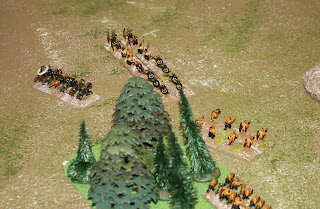 Out on the left, Dave has some cavalry faced by a lot of skirmish infantry. He can disperse it if he makes contact without being shot to pieces on the way in. So far he's taken one hit. 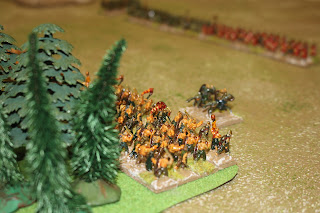 I just like this shot of the Germans lurking in the wood. 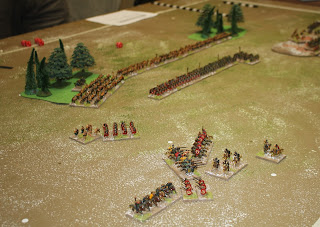 The cavalry engage. The Sarmations in the centre should have the upper hand, but the unit fighting the Auxilia LHI face a potentially tough fight. The cohort in the background disperses one of the Light Infantry units. Meanwhile the German infantry division start to wheel inwards. It is a slow and ponderous process. 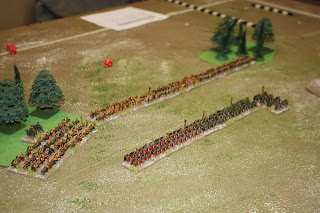 Does look quite threatening for the Romans, however. They could easily become engulfed. 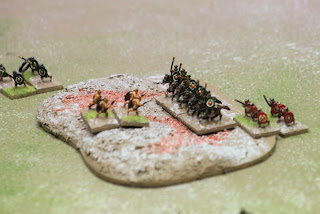 Steve had been hiding some cavalry behind a hill crest. Dave sent skirmishers to flush them out and maybe stick them with a javelin or two. 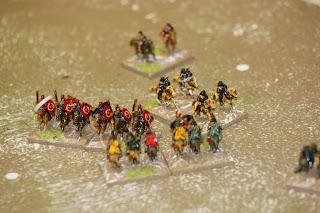 The Sarmations start to gain the upper hand. 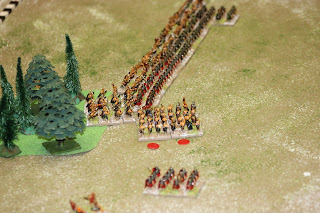 Impatiently the Romans rush to contact. This is probably a mistake as it makes it easier for the German cavalry to get round the flanks. And also the end of the German line can wheel in earlier than expected. They take the first opportunity to split a division and then immediately perform a complex manoeuvre, - a triple wheel - to line up the Roman flank. 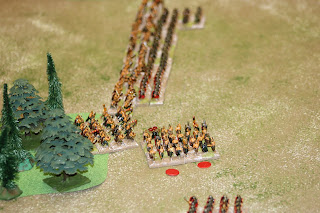 The resultant contact causes the Romans to lose the fight to their front. Alas this means no routed into test. NB There's a big difference in the Initiative Values of these two armies in the Roman's favour (7:4) so the Germans almost never win the initiative or chose melee direction. 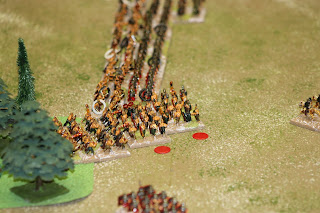 With the Roman line pinned in combat the German flanking force crashes in again. 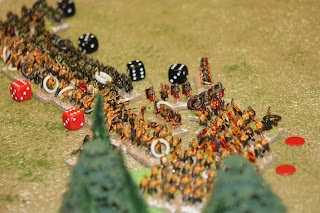 Despite good dice rolls for the Romans the Germans prevail. 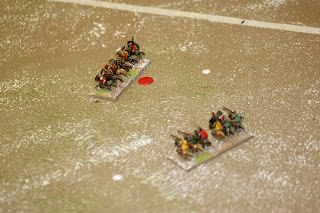 Meanwhile out on the right flank both of the German cavalry units have broken free and are circling the Roman line to attack its rear. The Romans seem to be in a bad place. 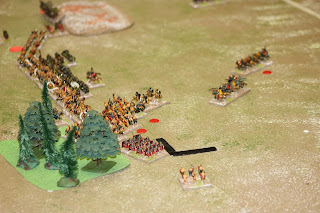 However, that cohort column is now swinging into action, and heading into the rear of those Germans. Alas they'll need to fight them in the woods, but a win will break them and cause routed into tests. 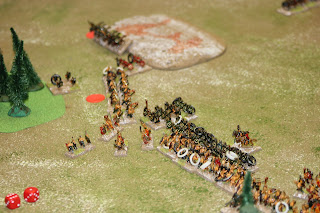 Is the tide turning? The other column bursts through the other end of the German line. It's going to be a long struggle, however, as the German army is big and it has a high breakpoint. 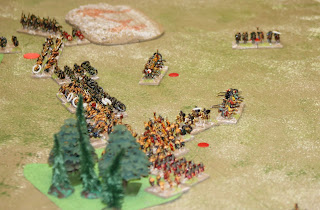 All hands to the pumps at the other end. The Roman Light Horse hits the flank of the German infantry, only to be hunted down by the Sarmations. 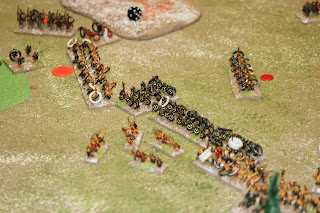 Bang! Another warband gone as the Romans turn the screw. Alas they can only afford to lose one more unit and need to kill two or three more of the German key units. 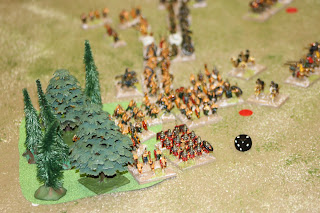 Another warband broken at the other end, and another successful pass of a routed into test that would have cost the game (that's a unit with a General in the rout path, so two army breakpoints going begging). 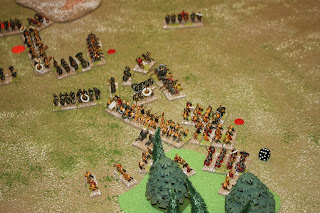 And the Samations deliver the "coup de grace" by clattering a cohort in the rear and breaking it. Win for the Germans.

Well, it ended up being very close, and either side could have won it in that last turn. Everyone enjoyed the game a lot and felt that they'd want to try some more Armati in the not too distant future.

I felt it was a classic early-player game of Armati, when all the clever tricks have yet to be learned and it is all about getting the big picture right. The Trajanic Roman army is small but is very forgiving for the  inexperienced commander. It has a good initiative level, a good number of divisions and infantry that can wheel and move, and have good melee factors. All it really lacks is killer cavalry (I gave their Sarmation mercenaries to the Germans for this game) and a bit more archery wouldn't go amiss, but mostly it will get you out of jail and avoid you being humiliated.

The Germans are a mass and are a large army with limited options (and I don't have all of them in my box anyway). The Romans made one tactical error, which was fighting too far forwards. They nearly got away with it, but ultimately it probably cost them the game.

A good evening's entertainment that kept all the players hooked until we had a win just on the stroke of midnight. Hopefully everyone slept well once they were home.